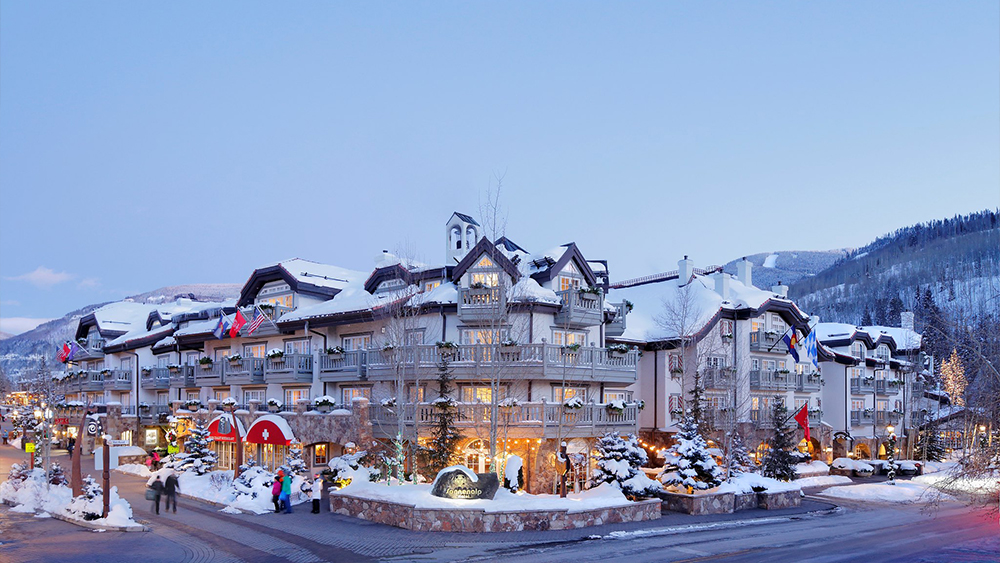 Skiing soldiers returning from World War II founded Vail Ski Resort in December 1962—60 years ago this winter—launching what would eventually grow to become one of the biggest, most popular ski resorts on the planet. Skiers from around the world love Vail for its sprawling 5,000-plus acres of terrain (including its spacious “back bowls”), as well as its Bavarian-inspired fairytale architecture and many indulgent spas.

But when the lifts stop spinning and après-ski begins, Vail really comes to life—travelers pull off their helmets, unbuckle their ski boots and begin to recount the day’s chilly, high-elevation adventures. “Vail is truly like no other,” says Angela Mueller, executive director of longstanding food festival Taste of Vail. “We have a core strength of amazing spots that have been here for years, as well as a new evolution of restaurants.”

Below, some of Vail Valley’s best spots for après-ski eating and drinking.

Many of the details surrounding Vail’s original ice bar have been lost to history. But, at some point in the early to mid-1960s, not long after the resort first opened, investor Bill Whiteford took it upon himself to build a bar made from snow on the slopes. Serving up drinks, pastrami, pizza, crepes and other snacks, the clever concept became an immediate hit with skiers. But when the snow melted later that spring, so too did the ice bar. Now, in honor of its 60th anniversary, Vail is bringing back Whiteford’s fun idea and opening two ice bars this winter: one at Eagle’s Nest, and another at Wildwood. Though new, they’re sure to be some of the buzziest après spots on the mountain.

Let chef Richard Sandoval revive you after an exhilarating day on the slopes with innovative New American dishes at Stoke & Rye, located inside The Westin Riverfront at the base of Beaver Creek Resort. A few of his masterpieces: smoked oysters with pine, lemon-bourbon aioli, trout caviar and wood chip mignonette, a 52-ounce tomahawk flamed tableside with moonshine whiskey, and the Sakura pork loin, served with applewood bacon, barigoule artichoke purée and apricot-almond sauce. Culinary creations aside, another big draw at Stoke & Rye is its extensive whiskey list, which features more than 160 pours from around the world.

Wander into King’s Club at the Sonnenalp Hotel and you’ll feel like you’ve been transported to Bavaria. And for good reason: Run by generations of the Faesslers, the Sonnenalp is the Vail Village outpost of the family’s original location in southern Germany’s Allgäu Alps. With comfortable couches, arched doorways, custom wood furniture, a fireplace and other European-inspired touches, King’s Club feels like Vail’s upscale living room. Munch on small bites, like whipped ricotta with black truffle honey, thyme and grilled French bread, while sipping a glass of Grüner Veltliner, a hefeweizen or an Old Fashioned.

After a day spent zooming around in the cold, there’s nothing more re-invigorating than tucking into a hearty plate of mushroom ravioli or gnocchi smothered with Bolognese at La Nonna. Here, executive chef and co-owner Simone Reatti draws inspiration from the food he grew up eating in the Dolomites, but with a slightly more sophisticated flair. The open kitchen gives the dining room a lively, rustic feel and, in true mountain town spirit, the service is quick and attentive without being overly stuffy.

Wine lovers flock to Root & Flower for its more than 50 wines by the glass and its expansive bottle list, but stick around for the intimate bar’s many decadent dishes, dreamed up by executive chef Matt Limbaugh. Shareable small plates like lobster deviled eggs and beef fat potatoes—made with succulent wagyu tallow, black garlic aioli, peanut chili crisp and fresh chive—are the best apres-ski distraction from sore quads and calves.

Warm up by the sleek contemporary fireplace or take the après party outside to the firepit-adorned patio at The Remedy Bar, nestled inside Four Seasons Resort and Residences Vail. Indulge with an order of the bar’s famous haut chocolat, complete with house-made marshmallows, chocolate tuile and Chantilly creme, or one of its many “elixirs and potions,” like the punchy Strawberry Rye-Barb, concocted from rye whisky, Grand Marnier, rhubarb bitters, strawberries and lime juice. After apres-ski drinks and nibbles, venture over to Miller & Lux Vail, the Colorado winter pop-up version of celebrity chef Tyler Florence’s San Francisco steakhouse.

Founded in 1977, Sweet Basil is a Vail legend that’s been able to stay relevant and hold onto its glowing reputation through the years thanks to a rotating crew of talented culinary professionals. Start with the wildly popular (and highly Instagrammable) whipped feta—which is served with a crispy, spherical carta di musica cracker—before proceeding to other internally influenced, contemporary American dishes, like hamachi crudo, tiger prawn scampi and grilled Hawaiian kanpachi. Finish the experience with Sweet Basil’s beloved sticky toffee pudding cake, which is worth a visit in its own right. Head to sister restaurant, Mountain Standard, if you’ve got a craving for oysters and other raw bar fare, as well as hearty meats roasted over an open wood fire.

Brush up on ski terminology over drinks at Brass Bear Bar, which looks out over Beaver Creek’s immaculately groomed slopes from inside Park Hyatt Beaver Creek Resort and Spa. The winter cocktail list features cheekily named sips that refer to Vail Valley’s unique, hyper-local ski culture, so think of ordering a drink as an investment in your education. The Yellow Jacket, for instance—made with rum, fernet, brown sugar simple syrup, and angostura and chocolate bitters—is a nod to the not-so-nice nickname skiers and riders gave to Vail’s infamous mountain safety staffers, aka ski patrollers, while the Jack Rabbit (vanilla vodka, peppermint schnapps and crème de cocoa)‚ is a nod to a Beaver Creek ski run.