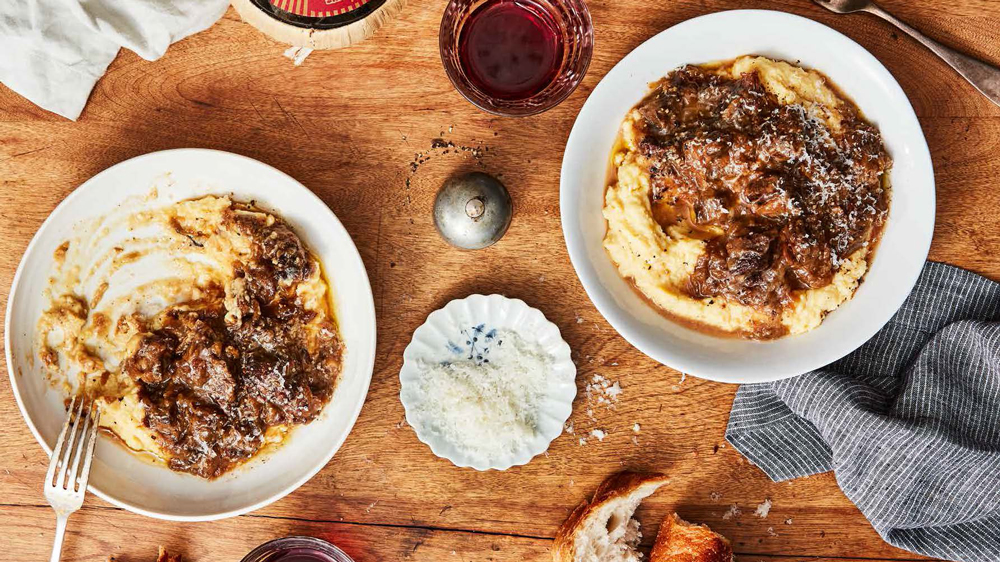 With their new cookbook Italian American the chefs behind Don Angie, Angie Rito and Scott Tacinelli, celebrate the red sauce Italian food they loved growing up and serve at their hit restaurant in New York City. But they’ve also found inspiration outside the cuisine immigrants from Southern Italy created here in the States. They’ve gone back to the source to find dishes they fell in love with and share them in the book, like this amazing recipe from Naples below, which you can serve over pasta or polenta. Either way, it’s a perfect meal as the weather turns cold.

We discovered this sauce, sometimes called ragu Genovese, in a tiny trattoria in the heart of Naples. The rich, onion-laden pasta arrived atop a giant mound of maccheroni, and though it seemed so simple, the depth of flavor that had been coaxed out of the long-cooked ragu was unlike anything we’d ever tasted. The dish is found only in Naples; the sauce never became popular in the United States, nor, as far as we can tell, anywhere else in Italy. No one knows why it’s called Genovese, since nothing like it exists in Genoa, the northern Italian port city from which the name is derived, but some suspect that it may have originated there, made its way south to the port of Naples via Genovese merchants, and stayed put.

The original recipe involves braised meat, usually inexpensive roasting cuts, and a mountain of onions; it’s almost always served with a tubular pasta like ziti. Ours is made with short rib because it has great flavor and lots of natural fat. We braise the meat and caramelize the onions in separate pots, then combine the two at the end, marrying all of those deep roasted flavors together in a thick, rich sauce. If you don’t want to go the pasta route, this ragu would be delicious over polenta, rice, or even potatoes.

To serve with pasta

In a large heavy-bottomed pot, heat 1 c. of the olive oil over medium-high heat until it is nearly smoking. Add both onions, the celery, 1½ tbsp. of the salt, and 1 tsp. of the pepper and stir well. Increase the heat to high and continue stirring until the vegetables begin to soften and release liquid, 2 to 3 minutes. Reduce the heat to medium and continue to cook, stirring and scraping intermittently, every 8 to 10 minutes, to avoid sticking. Continue cooking and scraping the vegetables while searing the short rib in the next step.

Season the short rib evenly with the remaining 1½ tbsp. salt and 1 tsp. pepper. In a second large heavy-bottomed pot, heat the remaining ⅓ c. olive oil over medium-high heat until it is nearly smoking. Working in batches if necessary to avoid overcrowding, add the meat in an even layer and sear until browned on all sides, about 4 minutes total.

Using a ladle, carefully remove the excess fat from the pot and discard, leaving behind about 2 tbsp. of fat. Add the wine and simmer until the volume of the liquid is reduced by half, 2 to 3 minutes. Add the chicken stock and bring to a boil over high heat, then reduce the heat to low and simmer. Cover the pot, leaving just a small crack open at the top, and simmer gently until the meat is fork-tender, 1½ to 2 hours.

The liquid should be reduced to about half of its original volume and turn dark brown in color. Meanwhile, keep watching and stirring the vegetable mixture. If the vegetables start to stick or burn, deglaze with up to ¼ c. water, adding 1 tbsp. at a time, and scraping the bottom of the pot to release any stuck or burnt bits. (You may end up repeating this deglazing process two or three times.) Cook the mixture until the vegetables are very soft, a deep golden brown, and about one-quarter of their original volume, 1½ to 2 hours.

When the vegetables are caramelized and the meat is tender, add the vegetables to the pot of meat and stir very well to combine. Stir in the vinegar. The sauce should be thick enough to coat the back of a spoon. If it’s too thin, simmer over low heat until it thickens up, which can take up to 30 minutes.

The sauce is ready to be used at this point, or it can be stored in an airtight container in the refrigerator for up to 1 week, or in the freezer for up to 3 months.

To serve with pasta

In a large pot, bring 4 quarts water and the salt to a boil over high heat. Add the pasta and cook according to the package directions. Drain and add the pasta to the sauce, increase the heat to medium-high, and mix thoroughly with a spoon to coat. Add the butter and pecorino and stir well to combine. Once the butter has melted, remove from the heat. Finish with the lemon juice and parsley, stirring well to combine. Serve immediately.