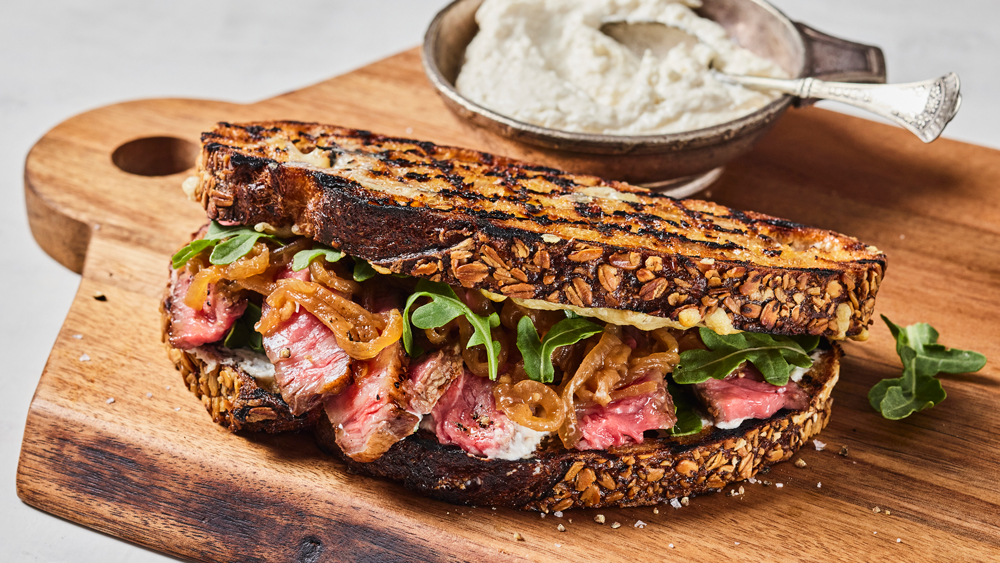 If you’re looking to upgrade on the customary Super Bowl fare of wings, sliders, seven-layer dip and pigs in a blanket, chef Curtis Stone has you covered. The Aussie may call football “gridiron,” but that doesn’t mean he doesn’t know how to cook up a craveable Super Bowl feast. Stone is the chef behind the meatcentric Hollywood restaurant and butcher shop Gwen as well as the Michelin-starred tasting menu restaurant Maude in Beverly Hills (which reawakens from its pandemic slumber a day after the Super Bowl). In time for the big game he’s shared his recipe for ribeye steak sandwiches that make for excellent elevated game day eats. Of course, if you’re not feeling up to cooking this year, there are plenty of options to get a Super Bowl spread shipped to you.

To caramelize the onions, bring pot to medium-high heat. Add oil, then add onions and thyme; sauté 15 minutes, or until onions are golden brown. If too much fond (the tasty brown bits on the pan) begins to form, add a little bit of water and stir.

Add garlic and sauté two minutes, or until beginning to soften. Remove thyme stems. Season with salt and pepper. Remove from heat. If you decide to make them ahead of time, simply reheat them in a pan as you get ready to assemble the sandwiches.

In bowl, mix horseradish, mayonnaise and sour cream. Season with salt. This can be made a day ahead and stored in the fridge.

When you’re read to make your sandwiches, preheat large grill pan over medium-high heat. Coat steaks with 1 tbsp. oil and season with Butcher’s Salt. Grill steaks, turning steaks over every 60 to 90 seconds for about a total of three minutes per side, or until instant-read meat thermometer registers 125°F for medium-rare doneness. Transfer steaks to rack over baking sheet and rest five minutes. Reserve grill pan.

Spread about 1 tbsp. horseradish sauce over each of four slices without cheese and then top with arugula. Trim fat and sinew from steaks, then thinly slice steaks across grain. Divide steak among sauce-topped bread. Top with caramelized onions, more sauce and remaining four grilled bread slices, cheese side down.