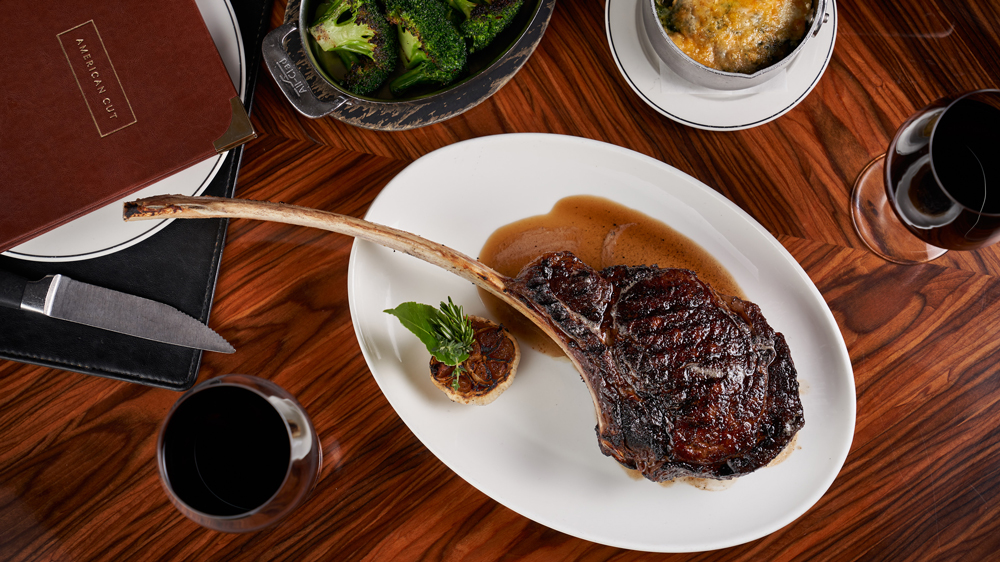 In spite of New York City’s ever-evolving food scene—Eleven Madison Park’s all-vegan tasting, for example—one thing remains certain: You can always get a great steak in this town.

Whether at a traditional steakhouse, where starting with martinis and oysters before moving on to a bacon-laden wedge or crisp Caesar salad prepared tableside is the prelude to the main event, or at an upscale bistro where ordering the solo beef entree will make you the envy of your fellow diners, you don’t have to try hard to satisfy your red meat craving in Gotham. We went across the city in search of the top cuts of beef and found our favorite preparations, from the team at St. Anselm’s tomahawk where they leave all the meat on the bone to Cote grilling A5 right in front of diners. Here are eight can’t-miss steak experiences in New York City.

Boldly opening up shop just a couple of blocks away from steakhouse legend Peter Luger, this Brooklyn restaurant housed in a former bank—with impressive, requisite high ceilings to boot—is serving much more than steak for two via its cote du boeuf. Francie’s meat de resistance is an over-the-top dry-aged, bone-in ribeye. Designed to serve two, the 40-oz behemoth is from Creekstone Farms, in Arkansas City, Kansas. Chef Chris Cipollone says the restaurant receives the meat after it’s already been aged for 21 days, at which point it’s rubbed with maple syrup, garlic and rosemary, before it’s left to chill for another seven days. The 28-day aged steak is grilled and roasted to medium-rare (unless otherwise specified) and held in a butter bath. “This bath from the day previous is strained and turned into a hollandaise for the steak, with beefy flavors along with maple and rosemary,” Cipollone says.

With a name like Quality Meats, there’s little question as to what’s for dinner. But decisions still must be made at this meat-centric, Midtown West establishment. While all the steak is of high-quality (the name is immodestly on-point), the real standout here is the double-cut tomahawk ribsteak. The 50-oz hunk of meat comes to New York by way of Washington State’s Double R Ranch. The long bone prime rib, rubbed liberally with fresh herbs, whole garlic and butter, is cooked under a low heat for five hours before a quick trip to the broiler to encourage a nice charred exterior. It’s carved at the table and served with a horseradish cream and caramelized onion jus, though it needs neither of these to delight the taste buds. Right answers only for the selection of sides: whipped potatoes, parmesan waffle fries and corn crème brûlée.

A5 Japanese Wagyu at Cote

This hip but seriously dedicated Flatiron restaurant blends elements of classic Korean barbecue and modern American steakhouse to execute one of the city’s finest interpretations of steak you simply cannot replicate at home. There aren’t too many places in town where you can find authentic A5 Japanese Wagyu, but Cote is one of them. Prized for its buttery texture, Cote’s team says the beef from Miyazaki Prefecture, a region on the Southern tip of Japan’s Kyushu Island, has signature “snowflake-like” marbling and melt-in-the-mouth appeal. Caramelized to perfection on smokeless grills at each guest’s table, it’s so fantastically rich and buttery that a little really does go a long way for once.

Among steak connoisseurs, the filet mignon doesn’t tend to get a lot of love. The cut is known for its soft, flawless texture but not for its funky or particularly nuanced flavor profile. Still, the safe bet that is this premium cut of meat at Strip House downtown doesn’t ask that you eat it on its own for maximum enjoyment—not when you can opt to have it Oscar style. A classic Swedish preparation enlisting asparagus, crab meat and béarnaise sauce, the restaurant’s Filet Oscar is only overshadowed by the steakhouse’s next level Oscar prep: Swap the tangy, buttery béarnaise for Strip House’s signature black truffle hollandaise, and the 8-oz, center-cut, USDA Prime filet mignon seasoned liberally with the chef’s salt-and-pepper blend and then broiled to perfection creating the signature Strip House crust, reaches new heights.

The head-turning axe handle at St. Anselm is a ribeye steak with the entire rib bone left attached. “A lot of butchers will sell bone-in ribeyes with the bone attached but trimmed short so it doesn’t extend beyond the meat. We leave our bones fully intact,” explains chef Hannah Lyons, who adds that aside from the cool presentation factor, the good amount of meat and fat on the bone is another reason they don’t trim it down. Lyons and her team receive an entire rib rack from one side of the cow, and instead of portioning the meat into equal sizes, they break it down into seven steaks and price each individually based on weight, giving customers a range of sizes to pick from every night. Seasoned simply with salt and pepper and grilled to medium-rare, the steak rests for a full 25 minutes before being topped with a pat of butter and crunchy sea salt and brought out to the table.

Porterhouse for Two at Keens Steakhouse

The 36-oz bone-in porterhouse for two at Keens is a timeless dish. The USDA Prime meat is handpicked—they look for, “heavily marbled, starry night marbling,” as more flecks [of fat] indicate juicy and tender steak results. After selecting the steaks from purveyors including Master’s Provision, Strassburgers and AVA, the meat is marked with a Keens stamp and then delivered to the restaurant to be weighed, tagged and aged on premise in a climate controlled, refrigerated environment. The meat is aged for three weeks in 34 to 38 degrees before being butchered in house for service. “It takes a lot of hard work, and we take it very seriously,” says manager Bonnie Jenkins of the iconic steakhouse’s process. One bite from the porterhouse’s filet and one from the strip, and you’ll understand why the blood, sweat and tears to obtain a reservation.

If you’re looking for the sexiest steakhouse in New York City, this swanky spot in TriBeCa from chef Marc Forgione is your best bet. Deeply dimmed lighting, rich leather banquettes and multiple dishes finished with flair tableside may make you wonder if the meat can actually live up to the sultry surroundings. But that it does, particularly evidenced in the restaurant’s 30-day dry aged tomahawk chop. From Creekstone Farms, the halal-certified meat is lightly seasoned and put out to char under a blazing hot broiler before being moved to a cast iron pan where, inimitable steakhouse steak crust intact, it finishes cooking. Flambéed tableside with herb butter and brandy, the American Cut steak needs no other additions—though the sunchoked spinach and heirloom carrots with capers and chimichurri, both delicious, will at least allow you to check your vegetable box for the day.

Flat Iron Steak at The Tavern

What the flat iron may be lacking in experience (the version chef Linda Luo serves has no age on it), it makes up for in soft, melt-in-your-mouth tenderness—thanks to painstaking in-house butchery. The 8-oz grass-fed cut comes to Hudson Yards via Painted Hills Natural Beef in Fossil, Oregon, at which point the connective tissue (something which Luo notes is a deterrent to some chefs) is removed with precision to reveal the most tender meat. At The Tavern, it’s grilled and glazed with Bordelaise sauce, a rich concoction made from red wine, beef bones, and thyme and fortified with leftover bits from the butchery. But that’s not all: The composed dish is served with perfectly salted marbled potatoes, garlic confit (the Chinese-American chef says it’s her spin on roasted garlic, that classic red meat accoutrement), and pearl onions glazed in a beef demi-glace.