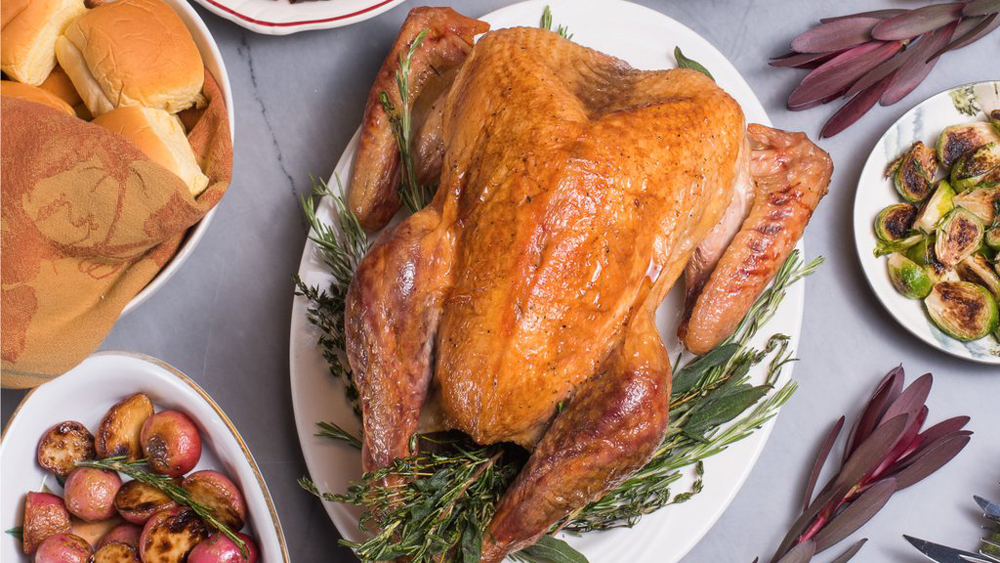 What’s so great about the Thanksgiving meal is that as much as it feels pretty standard—turkey, potatoes, stuffing, cranberries and such—there’s actually tons of regional variation, eclectic family tradition and immigrant influence incorporated in this holiday feast. That becomes readily apparent when you speak to chefs across the country and ask them about the Thanksgiving sides they couldn’t live without. And, sure, a lot of them mention stuffing, but not even that is the same person to person. This most American of holidays can give you a glimpse into the rich and delicious diversity of the nation. So roast up a bird, grab a glass of wine and feast your eyes on these outstanding sides.

At his Washington, D.C. restaurant Albi, chef Rafidi explores the cuisine of the Levant—the eastern edge of the Mediterranean that encompasses Israel, Jordan, Lebanon, Palestine and Syria. It’s the type of food he grew up eating with his Palestinian family outside of DC and so his Thanksgiving feasts reflected his heritage. “In my family, we would always have Middle Eastern and traditional Thanksgiving food,” Rafidi says. “From the Middle Eastern side, sfeeha—lamb meat pies. From the traditional side, yams with marshmallows—ha!”

The chef behind Harlem hit Field Trip spends his days exploring the world of rice from Africa, to the American South to India and beyond for the bowls he serves at his restaurant. But when it comes to Thanksgiving, he’s hankering for pasta. “Your grandma’s mac and cheese—you know, that five-cheese, super gooey and caramelized on the top—there’s something about it that just makes Thanksgiving seem so whole,” Johnson says. “And mac and cheese the next day tastes better than the first day.”

The chef behind Chicago’s hit West Loop restaurant Monteverde loves a cheesy hash brown casserole with a buttery Corn Flake topping. “My Aunt B is the queen of the casserole and always follows the rules of the Casserole Gods: You can never have too much butter and one must always top with something golden, crunchy and delicious!” Gruenberg exclaims.

Our 2019 chef of the year is serving a turducken stuffed with boudin from Best Stop along with a whole other host of fixins that lean on his childhood. “I grew up in Tulsa, Okla. and we didn’t have access to a lot of great seafood. With that in mind, my mother made the best smoked oyster dressing. Very light smoke flavor and really no oyster flavor to speak of but damn was it good. I still make it—or try to recreate it—these days,” Shepherd says. “Green chili Tater tot casserole and Mom’s Rum Sausages are delicious as well. Basically, Hormel skinless breakfast sausage cooked down in rum and brown sugar.”

The chef behind the outstanding Nashville restaurant Henrietta Red mixes up the handcrafted and mass-produced on her table. “I love cranberry sauce so I usually make one with ginger and orange and also put out a can of the jellied kind,” she says. For the fresh version she grates in ginger and adds some brown sugar for sweetness. For the jelly she grabs a can opener and, PLOP, on the plate it goes. The Nashville born-and-raised would be remiss if she didn’t mention a few more traditions. “I also love Sister Schubert’s yeast rolls—they are a thing here in the South!” she says. “And of course, oyster stuffing.”

The Top Chef champ and Daybird chef-owner grew up in Dearborn, Mich. bopping around her parents’ Chinese restaurant from a young age. At Thanksgiving they ate a dish that has remained a favorite for her. “I love a good sticky rice stuffing,” Lin says. “We use glutinous rice—a.k.a. sweet Thai or mochi rice—Chinese sausage, shiitake mushrooms, five spice, green onions and dark soy. We usually roast a duck or a goose, but sometimes we did turkey. But I like prime rib on Thanksgiving, to be honest.”

“It’s all about the condiments for me,” Williams, chef-owner of Mida in Boston says. “If chilled cranberry sauce or warm gravy aren’t there, I can’t really get through the meal.” At his Italian-influenced restaurant he’s featured a poppy seed-golden raisin jam that’s bright and balanced with texture. “It goes with turkey, duck, chicken, on top of roasted carrots—even on some desserts,” Williams says. It’s a constant in his fridge because of his wife’s love for it and it’s a great accompaniment to his Thanksgiving table.

The chef behind Michelin three-star SingleThread in Sonoma harkens back to memories of France for his favorite side. “We love Pommes Aligot which is a decadent mash potato that I used to make when I worked for Michel Bras,” Connaughton says. “This is a favorite dish of his region and uses the local Laguiole cheese to create this gooey and chewy texture. You use two spoons to twirl it at the table and slide it onto the plate. This year our older daughter Chloe is taking it on for the first time and has been practicing the week leading up to Thanksgiving!”

Back in the early days of the pandemic, the chef behind Pig & Khao on New York’s Lower East Side and Piggyback Bar near Chelsea joined Robb Report Culinary School to fry up a whole red snapper from her cookbook Lemongrass and Lime. Inside that book is also a recipe for her garlic fried rice that Cohen has been making for Thanksgiving as long as she can remember. “It’s just day-old jasmine rice, shrimp paste, tons of garlic and salt—and my mom likes to add scallions,” Cohen says. “It’s extremely easy and delicious.”

I’m not a chef, but I do eat a lot. Also, I wrote this article, so I get to include myself if I want to. I probably would have said stuffing if a bunch of other chefs hadn’t. Also, I usually make mine from a Trader Joe’s box, so that would be cheating to say that’s some great dish, though I do love it. So, as a carbphile, I have to say Parker House Rolls—which I make from scratch every year. They’re perfect for slathering in butter or dragging through all the detritus on my plate. Also, they become the perfect vehicle for the Thanksgiving leftover sandwiches I subsist on the remainder of the weekend.