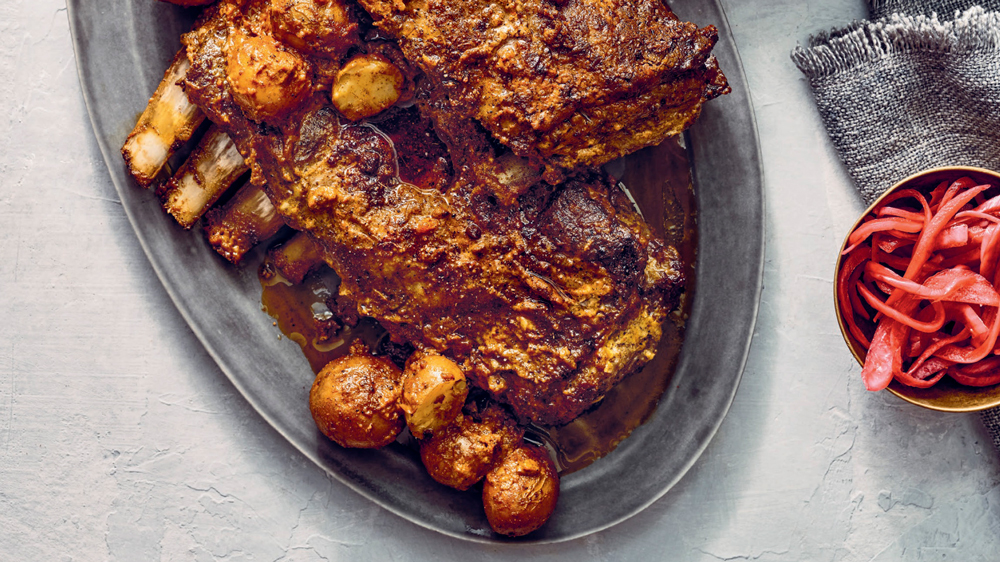 Nowhere in the world did European settlements have more impact than the Portuguese colonial empire in India. Within less than a hundred years of the Portuguese establishing themselves in India, two-thirds of the population of Goa was Christian as a result of brutal mass conversions to Catholicism. A new cuisine emerged: meats, potatoes, tomatoes, and vinegars native to Portugal were combined with the Arab influence of dried fruits, nuts, tamarind pulp, shredded coconut and aromatic spice masalas. Vindaloo is a Goan adaptation of the Portuguese dish carne de vinho e alhos, or meat cooked in wine, vinegar and garlic. Add to this coconut, black pepper, cinnamon and red chiles, and vindaloo was born. Pickled onions make a great side to the ribs.

To make the pickled onions:
Peel the onion, cut it in half, and then thinly slice it. Place it in a container with the beet, star anise, red chiles, black cardamom, cinnamon, red wine, salt and 2 cups water. Cover and refrigerate for two to three days for the onions to turn a deep magenta pink and infuse with the flavor of the spices. Discard the spices and store the onions in
a little bit of the brine.

To marinate and roast the ribs:
Place the entire rib rack on a baking sheet. In a small bowl, whisk together the red wine, mustard oil, minced garlic, black pepper, cloves and salt. Rub all over the ribs and marinate bone-side down in the refrigerator for at least 2 hours or up to overnight.

Place the ribs bone-side up in the oven and roast for 45 minutes.

Meanwhile, to make the masala:
In a small bowl, whisk together the coconut milk, red chile powder, jaggery, ginger, turmeric, cumin, and salt.

Take the ribs out of the oven, flip them over to bone-side down, and lower the oven temperature to 250°F. Place the potatoes around the ribs and pour the sauce over the ribs and potatoes. Cover with foil, making sure to tuck the corners tight, and bake for 1.5 to 2 hours, until the meat is tender and sliding off the bone.

Turn the oven off and remove the foil from the sheet. Sprinkle with the amchur and garam masala and let the ribs rest in the oven for another 30 minutes. Serve with the pickled red onions.

Garam masala, which literally translates to “warm spice blend” (meaning heating for the body) is the one masala that most Indian kitchens have tucked away in a cabinet. The recipes and proportions can vary wildly, but they will all possess a large amount of aromatic spices. Some will contain coriander and cumin. I prefer to leave it to aromatic spices, like the ones here, which adds a delicious heady finish to foods.

Combine all the spices in a small bowl. Spread them on a baking sheet and toast in the oven for three to four minutes, until fragrant. Let cool and grind in a coffee grinder to a powder.

Reprinted with permission from Masala: Recipes from India, the Land of Spices by Anita Jaisinghani, copyright © 2022. Published by Ten Speed Press, an imprint of Penguin Random House.