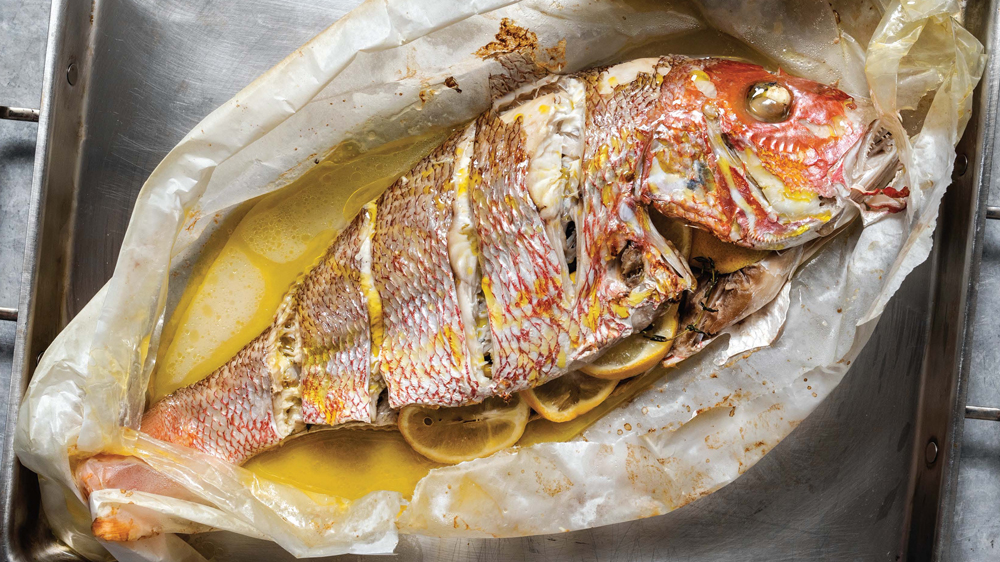 Chef Daniel Holzman (creator of the Meatball Shop and Danny Boy’s Famous Original) and Matt Rodbard (James Beard Award-winning cofounder of the food site Taste), didn’t set out to write the conventional cheffy cookbook. Food IQ would not be some great ode to a single restaurant or esoteric professionals-only style of cooking. They had questions every enthusiastic home cook would want to figure out, like “What kind of onion should I use?” and “What’s the difference between a cheap knife and an expensive one?”, and sought to answer them. Along the way, they shared recipes to put their learnings into action and help people become better home cooks. Here they’re showing Robb Report readers a classic method for steaming fish. And in the book, they dive into when you should steam vs. fry vs. grill a whole fish.

Steaming en papillote (cooking in a folded parchment-paper envelope) never ceases to enchant Daniel and Matt. The technique works well for almost any type of fish or for quick-cooking vegetables like asparagus, broccoli or green beans. You can experiment with different vegetables and flavor profiles using different sauces, such as sake, butter and soy sauce for a Japanese direction or chipotle, tomatillo and lime for a Mexican inspiration. Just be sure that if you’re cooking more than one item (like halibut and asparagus) in the same envelope, everything cooks in roughly the same amount of time. Cutting vegetables into smaller pieces can speed up their cooking. But if you’re trying to cook salmon and butternut squash in the same package, you’ll be hard-pressed not to overcook the salmon by the time the squash is soft enough to serve, so pay attention when matchmaking.

With a sharp knife, score the fish skin on the diagonal three or four times on each side. Season both sides of the fish and inside the cavity with 1.5 tsp. salt. Stuff the cavity with the thyme and lemon slices.

Place the fish on a large piece of parchment paper, then drizzle with the oil and arrange the butter pats evenly spaced on top. Add the wine, fold the long sides of the paper up to meet in the middle above the fish, and then roll the edges over to seal. Roll in the edges on the sides to seal and then fold the sides under the fish. Place the whole package on a sheet pan.

Bake until the parchment inflates and begins to brown, about 25 minutes.