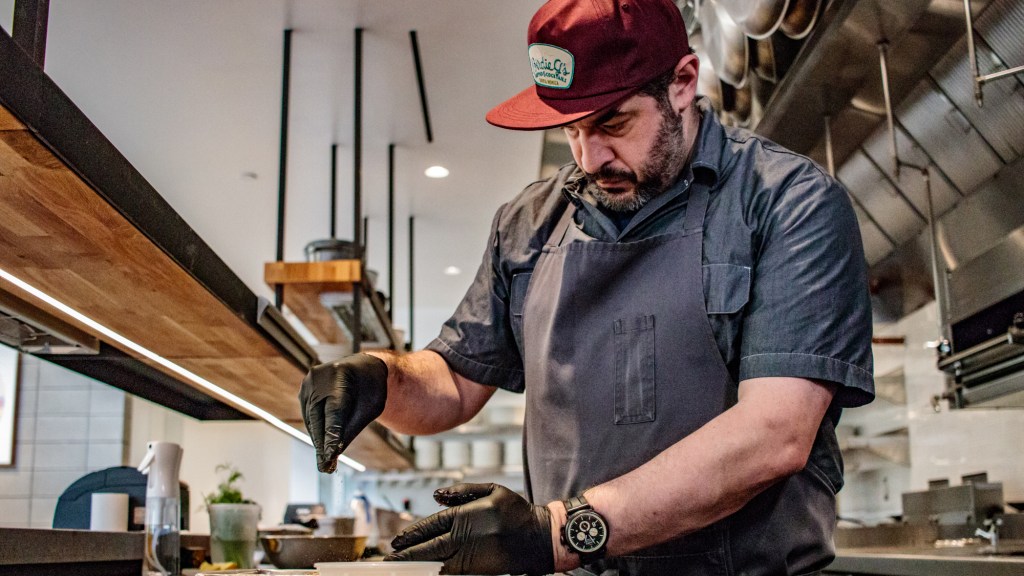 A young chef approaches Jeremy Fox and sets a small dish in front of him that’s filled with braised escarole and topped with shaved cheese. “Want to try some country club greens?” he asks his boss. Fox had tasked his sous chef with creating a dish inspired by something Fox dined on at a country club in northeastern Ohio—not exactly a mecca of gastronomy. But this version—with the subtle heat of Fresno chile and the complexity from the fennel-infused broth—transcends the mushy greens Fox ate with in-laws outside Youngstown. It’s the union of familiar and original as well as the mix of Midwest and California that Fox is striving for at his Americana-inspired new place Birdie G’s in Santa Monica.

The normally reserved Fox is pretty excited, and not just about the dish. At 43 years old, one of the most quietly influential chefs of his generation will open his own restaurant from scratch for the first time. And he knows the journey here wasn’t easy.

After working under David Kinch at Manresa, Fox became the chef at a vegetarian restaurant attached to a yoga studio. On the surface it was an odd move, but with the aid of a dedicated garden, he turned Napa Valley’s Ubuntu into a sensation, earning a Michelin star along the way—almost unheard of for a vegetarian-only restaurant.

The restrictive nature of Ubuntu actually expanded his creativity. In the kind of carnivore-friendly cooking that’s taught at culinary schools, meat is the center of a plate and the produce is relegated to sidekick. Fox had to make satisfying dishes with vegetables and fruit as the star, and he did it with creations such as his heirloom tomato salad with juniper, basil and black bread, or a creamy cauliflower dish seasoned generously with vadouvan. People loved it. Along with the Michelin star there were features in Oprah’s magazine, best new chef accolades, New York Times raves and James Beard nominations.

But the sudden notoriety fed into anxiety, depression and an unhealthy reliance on prescription drugs. After he left the restaurant he got his car impounded, then moved south to LA where he bounced from job to job until hitting rock bottom. Eventually, he took a job at Rustic Canyon, a restaurant serving farm-to-table California cuisine in Santa Monica.

He kept his head down, kicked the habit and focused on cooking. The Ubuntu experience had been formative in unexpected ways. He learned what he didn’t want to do—which was cook over-complicated food to impress his peers and critics. Instead, he created food that wasn’t flashy, but straightforward and soulful, and driven by seasonal produce. “At the time, I almost wanted to not make much noise,” Fox says. “Nothing was over the top.” It was still creative, though. In his hands, simple-yet-unexpected combinations such as beets with berries or polenta with a savory strawberry sofrito didn’t just make sense, they were amazing.

He wasn’t looking to blow away fellow chefs, but he did it anyway. “I don’t know if suburban housewives or house husbands know him, but everyone that works in restaurants loves Jeremy,” says Lee Wolen of the Michelin-starred Boka in Chicago. “He’s a chef’s chef. Not that TV is bad, but I think why chef’s love him is because he really just cares about cooking and product. His only goal in life is to cook, as opposed to just be famous.”

Fox cooked with meat at Rustic Canyon, but still pushed himself when it came to produce. With the publication of his 2017 cookbook On Vegetables, his influence has only grown. The book has become a mainstay in many professional kitchens. “It can just spark creativity,” says Julia Sullivan of Henrietta Red in Nashville. “Like his miso bagna cauda as a sauce for vegetables. It incorporates international flavors you wouldn’t necessarily associate with traditional Italian cooking, but it brings something different to the dish to enhance the ingredients he’s choosing to highlight.”

Zachary Engel feels much the same way Sullivan does. The James Beard Award-winning chef had hoped to work for Fox back in the Ubuntu days. Engel missed that window, but he’s followed Fox since, including buying On Vegetables, which has become one of his favorites. “I really enjoy reading it and seeing his thought processes,” Engel says. “He’s inspired a generation of cooks.”.

Though Fox was able to put his imprint on Ubuntu and Rustic Canyon (which earned a Michelin star upon the guide’s recent return to Southern California), he was still working within someone’s else’s template. “I’ve always had this idea of a classic American restaurant, and I don’t feel like I was ever able to do it,” Fox says. “I wanted to do fun, whimsical, craveable, comforting food. It’s not a Midwestern restaurant as everyone is saying—it’s an American restaurant and the Midwest is part of my influence, but there’s inspiration from everywhere.”

Dishes like the Grilled Lamb “a la Saless” are inspired by Fox’s friends.  Photo: Jeremy Repanich

So last month he handed the executive chef role at Rustic Canyon over to Andy Doubrava so he could spend more time creating Birdie G’s, a deeply personal restaurant he has named for his daughter (Birdie) and grandmother (Gladys). He’s cooking riffs on what he ate as a kid from Cleveland, but also inspired by a career in California. He’s serving country club greens, beef tongue pot roast and Hangtown Brei—a cross between the NorCal classic Hangtown Fry (bacon, eggs and oysters) and his grandma’s matzo brei (eggs and matzo).

It’s a convivial style of food and restaurant that’s letting the reserved chef come out of his shell a little more. Now the guy who a few years back wanted to recede and not make noise is going for the opposite. “I always wanted a quiet place,” Fox says. “But now I want a loud place that’s bright with big portions and people having a great time.”

The footwear of a proper chef.  Photo: Jeremy Repanich