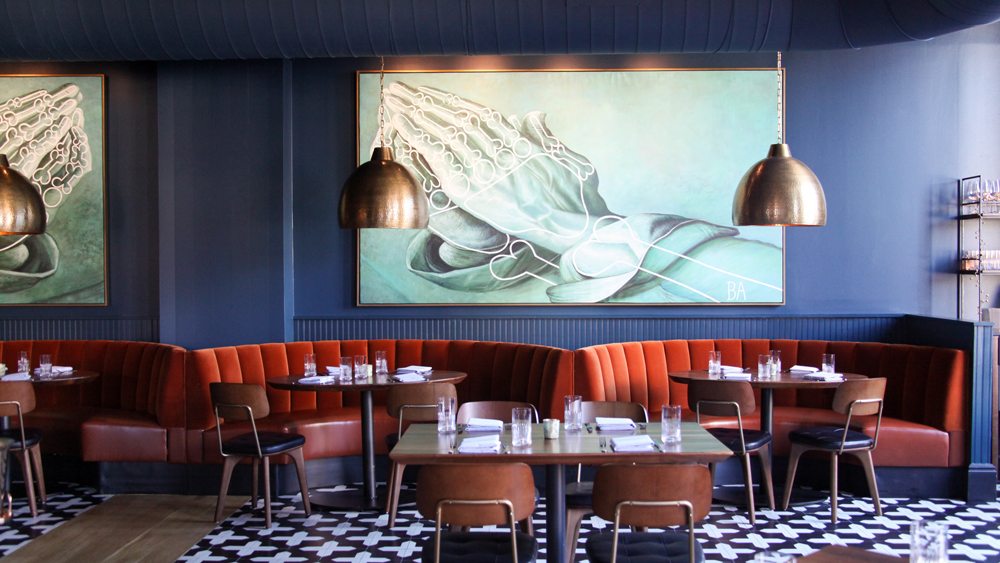 Master chess players can calculate a dozen moves ahead. They are patient. They have a strategy, a long-term plan and an endgame in mind.

Memphis chefs Andy Ticer and Michael Hudman started formulating a plan to open a French restaurant years ago, after culinary school. As young cooks, the duo—who were lifelong friends—worked at the city’s famed Chez Philippe restaurant and planned to focus their careers entirely on French cuisine. But that plan got sidetracked when they discovered they also had a passion for Italian cuisine with a Southern accent.

They launched a restaurant group and opened five lauded eateries, which include Andrew Michael Italian Kitchen, Hog & Hominy and Josephine Estelle in the Ace Hotel in New Orleans. They were finalists for James Beard Awards five times. But they were patient. They kept the dream of opening a French restaurant in the back of their minds. And that strategy has finally paid off.

“This is the kind of food we made when we first started cooking,” Hudman said. “We truly love this food. It’s the foundation of who we are as cooks. When we walked in the space, we both said this needs to be the French restaurant.”

The restaurant is located within a century-old former train station. Natalie Lieberman of Collect + Curate Studio spent years designing the 100-seat space, filling it with Old World elements like zellige tile, white oak and blackened steel, plus modern touches like adding gold dust to the grout. To the chefs, it reminded them of the romantic, French countryside they had grown to love when they were in culinary school in Italy.

“Everything just spoke to us about it, so we took the plunge and decided to give it a go,” Ticer said. “We’ve always talked about how fun it would be to kind of revisit that French style of cooking, 10 years later, with all we’ve learned, and see what we can do with it. We dove back into our old travels and just kind of reminisced of things that we used to do and tried to tweak it to now.”

Coming up with ideas was the easy part. The chefs independently wrote menus and, probably because they’ve worked together for so long, 90 percent of the dishes were the same. (They’re also related; Ticer married Hudman’s cousin.) Narrowing the collaborative menu down was the challenge.

So their offering at Bishop includes a little bit of everything, from peasant-style to higher-end and healthy, lighter to heavier, richer.

The offerings begin with traditional “Le Comptoir” bar snacks, such as raw oysters, chicken liver parfaits and country terrines packed with veal and smoked ham hocks. They showcase tinned seafood like baby squid at an oyster counter in the front of the restaurant, and serve it with grilled baguette, cultured butter, whole grain mustard and fermented vegetables. Classic soups and salads include French onion and Lyonnaise.

The chefs’ flair for mixing European cuisines with Southern ingredients can be found in their petit plats like the escargot and oysters, which are topped with parsley, garlic and butter, plus crunchy bits of dehydrated country ham and confit chicken gizzards. (They grew up with Italian grandparents in the South, so dishes like collard greens-stuffed ravioli were common at Sunday supper.)

At Bishop they serve popover rolls with bone marrow and black pepper-red wine glaze, and sourdough with a fromage brûlé—a crème brûlé made with Parmesan and comté cheeses. Their grands plats include large servings of coq au vin and steak au poivre. And there’s an entire section of the menu dedicated to potatoes in their many forms: robuchon, fondant, au gratin, frites and dauphine.

The wine list, curated by Ryan Radish, is completely French. (An adjacent,  2,000-bottle wine cellar is currently under construction.) And many of the cocktails are based around French vermouth, sherries and aperitifs. Bishop’s take on a French 75, for example, is called The Rook. Instead of using gin, they use an immature brandy from Louisville’s Copper & Kings distillery, lemon juice, spiced honey syrup and sparkling wine.

This weekend they will begin brunch service (French omelets and more) and next week they will begin lunch service with more soups, salads and sandwiches like the croque monsieur. They’re especially excited about the burger: two patties, American cheese, fermented tomato aioli and steamed onions, presented atop bordelaise sauce, reduced Worcestershire and veal stock. It comes with a fork and knife.

Ticer and Hudman have finally gotten a chance to return to their roots all these years later and, perhaps most remarkably, they remained close this whole time, doing it together.

“What we’ve always said is the friendships are more important than the restaurants,” Hudman said. “And so it was jumping off from there and just wanting to have as much fun with it as possible.”