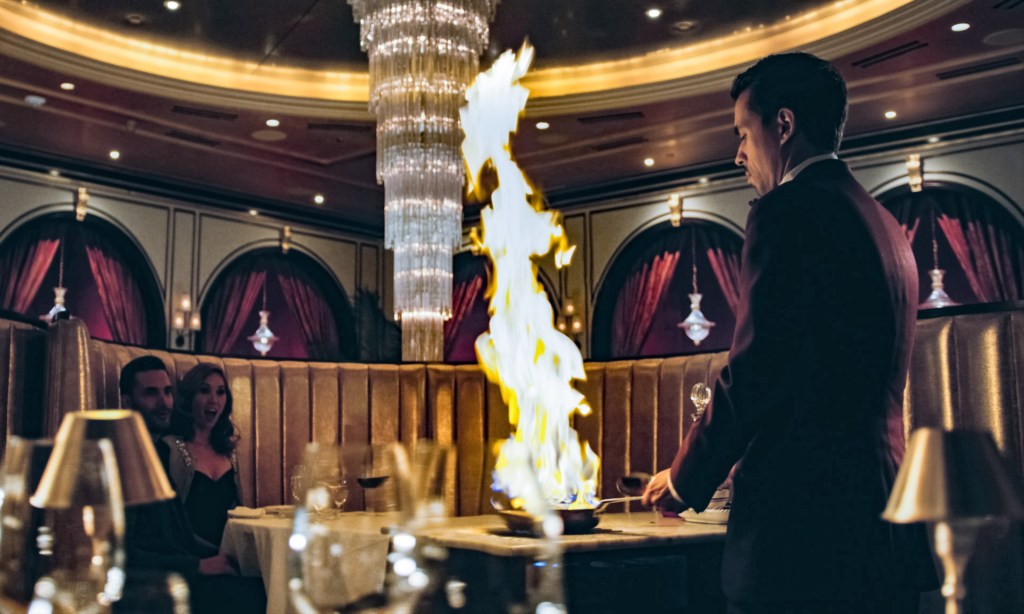 There was a time when a mainstream Hollywood studio would bankroll a gritty, original film about an dark character who challenges the audience’s beliefs. That movie could open to critical acclaim and top the weekend box office, while also adding to the canon American cinema. Now, amid changing viewing habits and a saturated entertainment market, the only way a studio will green-light that movie is if it’s an origin story for a Batman villain. Without a doubt, we are deep in the era of the blockbuster. But what the average cineaste may not know is that it’s devouring more than just movies.

What I just described is also the future of restaurants. Just as the golden era of TV and streaming makes it easier not to go to theaters, the proliferation of delivery and decent fast casual will make it easier to not go to restaurants. To get diners off their couch, restaurants will have to be big, bold and pegged to recognizable names. They will have to make dining out an event. And to make the economics of the industry work in their favor—where rising real estate and labor costs shrink margins—they’ll need to do it at scale. This isn’t some distant prophecy. The era of the blockbuster restaurant is about to begin.

Some of the emerging innovators of this new paradigm gained a foothold in the industry during the indie restaurant boom. The 21st century has seen the rise of small, personal, independent eateries that have changed what cuisines were afforded prestige in the American mainstream. They broke the old grip of stuffy fine dining and generally made food across the country better. That was the case with New York-based Major Food Group.

In late 2009, Rich Torrisi and Mario Carbone opened Torrisi Italian Specialties in New York’s Little Italy. Surrounded by painfully cliché red-sauce joints selling spaghetti and meatballs to tourists, they wanted to show that the Italian-American food they grew up on could be as refined as the French fare the two made together under Daniel Boulud. Their ever-changing prix fixe, filled with mozzarella, fusilli, antipasti pork with peppers and more, made the restaurant a hot dining destination and a relative bargain at $45 per person when they first started. The democratic little spot launched the duo to stardom in the New York food scene.

After they joined forces with business partner Jeff Zalaznick, Torrisi and Carbone didn’t limit themselves to just one restaurant. They launched a parent company—Major Food Group—opening the upscale ode to red-sauce joints, Carbone, the casual Parm, ZZ’s Clam Bar, Dirty French and others, while also expanding to Vegas and outside the US. But the biggest move the group made was in Manhattan, where they ventured from downtown up to Midtown.

In 2016, the kids were given the keys to the car. While in their 30s, the trio of restaurateurs took over the landmark Four Seasons space inside the Seagram Building and turned it into the Grill and the Pool—the former a swaggering throwback to midcentury New York chophouses, the latter a modern seafood-focused restaurant. Carbone, who would helm the Grill, had a clear plan. “I’m going to come in here, and I’m going to take this place that was literally called a ‘cathedral’ by Jackie Kennedy and be respectful of it, but I’m here to turn it up a little bit. This needs to be fun,” he said. “I want to be entertained. I don’t want to whisper.”

What they built represented a sea change. This wasn’t some ragtag group scraping cash together to make an indie hit. This was a $35 million build-out to turn a fusty fine-dining mecca into a grand, interactive event. The captains would be in Tom Ford suits, prime rib carts would trundle through the space, servers would wield duck presses tableside. The lights would be dimmer, the music louder, more people would cram into the bar and Carbone would test clever little ways to encourage conversation between server and diner, like the menu’s “Chilled Crustacean of the Day.”

“What does that mean? Actually nothing,” Carbone told me at his Midtown office. “‘Chilled Crustacean of the Day’ means I’m going to have a conversation with you about the langoustine that came from Scotland today, or a beautiful prawn that came from Santa Barbara. Tonight, we’re doing it like this and like that. Could I print that on the menu? Sure, but it’s way better if you hear it from me. It triggers a conversation.”

It all may seem like a bit much, but more and more, this is what it will take to get people off the couch and into a restaurant. According to the report “Eating Patterns in America” released last fall by industry analyst NPD Group, people may be getting more of their food at restaurants, but that doesn’t mean they’re sitting in them. “Visits to quick-service restaurants have increased 630 million visits since 2014, while total visits to restaurants have declined more than 700 million visits,” the authors wrote. And upscale casual restaurants experienced a sales dip in 2019 compared to 2018, according to a report by Black Box Intelligence.

“People don’t want to dine out anymore. They want to go on an app and get it delivered to their house,” says James Syhabout, chef-owner of Michelin two-star Commis, in Oakland. “The habit that’s still intact is going to a nice dinner for a special occasion, rather than, ‘Hey, let’s go out and have a nice dinner just because.'”

Realizing this, more restaurants are leaning into tableside preparations and convivial atmospheres. David Chang’s Momofuku group embraces large-format dishes to feed a group, with its whole duck and brontosaurus-sized plate short ribs theatrically sliced as you look on a salivate. Like a big-budget summer action flick, restaurants are realizing that audiences want to see things burst into flames. It’s a golden era of setting desserts on fire at the table, from bananas Foster to cherries jubilee to Baked Alaska. You don’t have to look much further than Major Food Group to understand that this is what diners want. In January, the group announced that the low-key Pool would go away so the entire space would now be the Grill, as there was more demand for the raucous restaurant than the subdued one.

This should portend a more exciting era of eating, right? Not quite. What we’re more likely to see is crushing sameness. Sure, the Grill and Momofuku are great, but that doesn’t mean their carbon copies will be. This would be like saying that all superhero movies are good because Iron Man and Black Panther were. No; Aquaman exists, after all. Restaurants across the country are already copying the aesthetics of the Grill, but most will fail to capture the vibe or the quality of the food. Instead, you’re more likely to see expensive takes on country club fare clumsily served tableside by staff not skilled enough to filet a fish without hacking it to pieces while the diners fidget in their seats. Why will the Grill continue to be copied? For the same reason there are all those The Fast and the Furious sequels—to the money people, it’s easier to grasp than an original vision. And the money people will become increasingly important in the blockbuster era.

Beyond the big, immersive dining experiences, there are more drivers to this new business model that are hidden from view. In major cities, running a restaurant is becoming prohibitively expensive. In 2017, Top Chef judge Tom Colicchio closed Craftbar after 15 years, citing a rent increase in the neighborhood of 50 percent. It’s not much better in LA. The price per square foot of commercial real estate has soared; in some neighborhoods, like Koreatown, costs have doubled from 2010 to 2019. At the same time, in many major metro areas, the minimum wage has increased. The most effective antidote to these trends? Strength in numbers.

“I think it’s really hard to have one restaurant—you need to have three restaurants,” says Kevin Boehm, co-owner of Boka Restaurant Group, which owns some of Chicago’s best dining establishments, including Boka and Girl & the Goat. “When my partner and I opened Boka, we saw we’d need more than one restaurant to make it a viable business proposition.”

Restaurants groups like Boka, José Andrés’s ThinkFoodGroup, Momofuku and Major Food Group help provide economies of scale for the operational side of restaurants. They can also add that little boost of familiarity for diners. A signature trait of the modern blockbuster, after all, is the franchise. A single film is part of a larger universe, be it Marvel, Star Wars, DC Comics, Harry Potter or the Fast and the Furious. In a sea of infinite choices, people flock to what they know. The suits bet on what’s worked before. The safest move is to invest in existing IP.

That’s why Momofuku finds itself so well poised for the blockbuster future. Chef David Chang has become bigger than restaurants. He has a successful podcast, two shows on Netflix and 1.3 million Instagram followers. Momofuku combines Chang’s celebrity with the deep pockets of billionaire real estate developer Stephen Ross, whose venture capital fund is an investor in the restaurant group. Chang is, at least, using his strength in the market for good, opting not to create a series of cookie-cutter restaurants and instead imbuing each enterprise with a distinct personality—while still playing within a Momofuku rubric. This may be what young chefs will soon have to hope for: Instead of having the capital to open their own independent restaurant, they’ll get to work inside a chain that still lets them have some measure of creativity.

Yet, that’s not how most of the restaurant groups will operate. The investors who will have enough money to get projects off the ground will be less tolerant of risk and original concepts, and they’ll give restaurateurs less time to learn from mistakes after the restaurant opens. There will be less opportunity for untested chefs to attract investors, not unlike how the mid-budget studio film struggles to find funding.

Despite the seeming doom and gloom, there’s some reason for optimism. You could make the argument that food in America has never been better. In fact, just because food is delivered or carried out and enjoyed at home, that doesn’t mean it’s lesser than what we get in restaurants. The blockbuster era of movies may have made it harder to find interesting, character-driven stories in theaters, but that doesn’t mean there’s any shortage of high-quality entertainment in our lives on TV and streaming services. The blockbuster era of restaurants may just mean we find our favorite food in a different place.