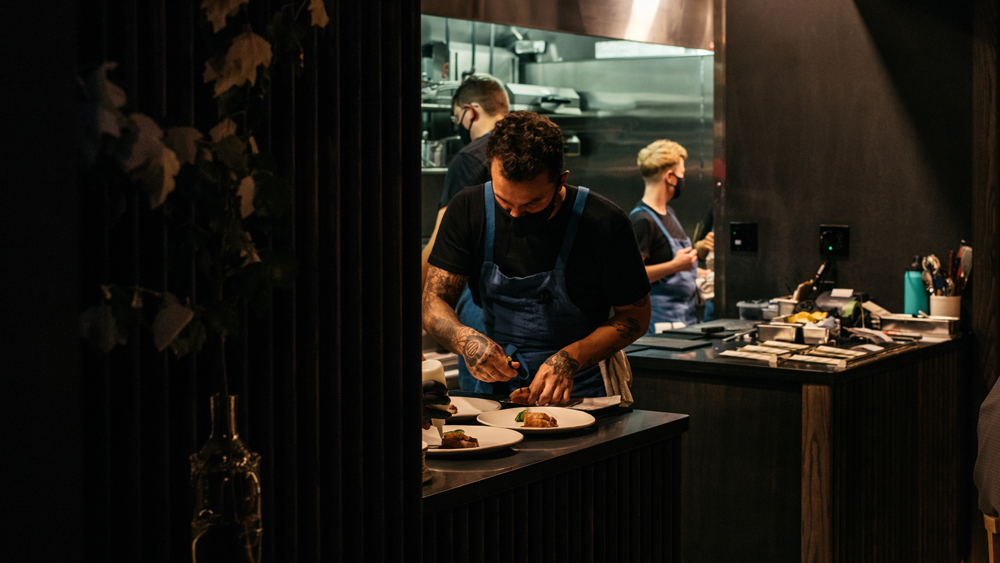 Williams, who opened the highly anticipated Tomo in the Seattle-adjacent White Center area last month, has cooked at fine dining powerhouses that include Brooklyn’s Blanca and Seattle’s Canlis (where he was executive chef and received a James Beard Award for Best Chef: Northwest).

But it was his prior experience at Phillips, a Seal Beach, California, diner his grandparents owned, that made him realize what a restaurant should be.

The diner specialized in chicken pot pie and also served chicken-fried steak that Williams loved. There was a breakfast quesadilla, Salisbury steak, a club sandwich, a patty melt and other “very tropey diner food.” The diner had daily specials, and it was the type of place where “if you raised the price from $4.10 to $4.15, everyone freaked out,” Williams says.

He still craves a lot of this diner food today, but what he remembers most is the feeling of the restaurant. He admits he didn’t love the grind of working there as a teenager, but he greatly admired what his grandparents, with help from his mother and aunt, accomplished.

“I really fell in love with the idea of creating a space for friends and regulars and being able to host and share space with people who’ve become integrated in your life,” Williams says. “When I first started, working in a restaurant was something that I didn’t really want to do. And then maybe after a year, I was like, oh, there’s something really beautiful here. I’m drawn to this.”

Williams is letting is menu be dictated by the seasons in the Pacific Northwest.  Photo: courtesy Kyle Johnson

This is the spark that drives Tomo, which is named after Williams’s Japanese grandmother, Tomoko Ishiwata Bristol. Tomo, appropriately, also means “pal”  in Japanese.

“We’ve created a place for our friends to go,” Williams says. “People come multiple times in a few short weeks. And if I look at the next month, there are so many familiar names. That makes me super excited. I want this to be a favorite restaurant, not an occasion restaurant.”

Tomo serves five-course dinners (including a vegetarian option) with a focus on hyper-local Pacific Northwest ingredients and also the heritage of the people cooking the food. Williams’s Japanese roots are reflected in dishes like a vegetarian chawanmushi with tropea onions. Tomo has also served pork collar with fermented kohlrabi and a light butter sauce made from a dashi base and local sea lettuce. Chef de cuisine Diana Mata García was born and raised in Venezuela, so Tomo recently served lamb with arepas made from corn that was ground in-house.

Williams gets meat from a farm in Washington’s North Cascades. He’s been leaning into summer produce like wild berries. He’s looking forward to the seasons changing and Tomo serving shellfish like oysters and geoduck. He plans to always have kakigōri as a dessert supplement, but the Japanese shaved ice will showcase different ingredients and flavor combinations (such as first-of-the-season grapes with hazelnuts) throughout the year.

“We’re very dictated by what’s around us and what the seasons hold,” Williams says. “Like, it’s raining right now for the first time in a minute, and it’s cold. So I know that the Sungold tomatoes I got at the market yesterday are going to be done. We’re just trying to be very adaptable.”

Williams has thought a lot about what he wants Tomo (which also has an à la carte lunch menu) to be. He isn’t doing fine dining, but he knows the experience at his restaurant should feel special. His plates, for example, are made by Seattle potter Akiko Graham, who’s created tableware for Canlis, Manresa and Coi.

The restaurant is located just outside of Seattle in a part of unincorporated King County called White Center.  Photo: courtesy Kyle Johnson

“I want to create a considered restaurant,” Williams says. “I’ve considered so many details and I’ve chosen to keep what I’ve wanted and reject what I don’t think is necessary. The food is not out of place in a fine dining restaurant. Our wine list is incredible. Our cocktails are thoughtful, seasonal, and I’d put them up against anyone. But we’re not a fine dining restaurant. I want a more casual form of service. It’s OK if you pour your own water. I think you can find your way to the bathroom on your own. I don’t think you need three people standing over your table at any given time.”

Williams remembers being a teenager and seeing how stressful it was for his family to run a low-margin business serving diner food. But he also remembers that his grandfather would shop at different farmers markets to get good produce. This commitment to doing things the right way has no doubt influenced Williams’s career.

Williams is also inspired by being in White Center, which has a diverse population that’s resulted in a restaurant community that serves everything from pupusas to Vietnamese crawfish.