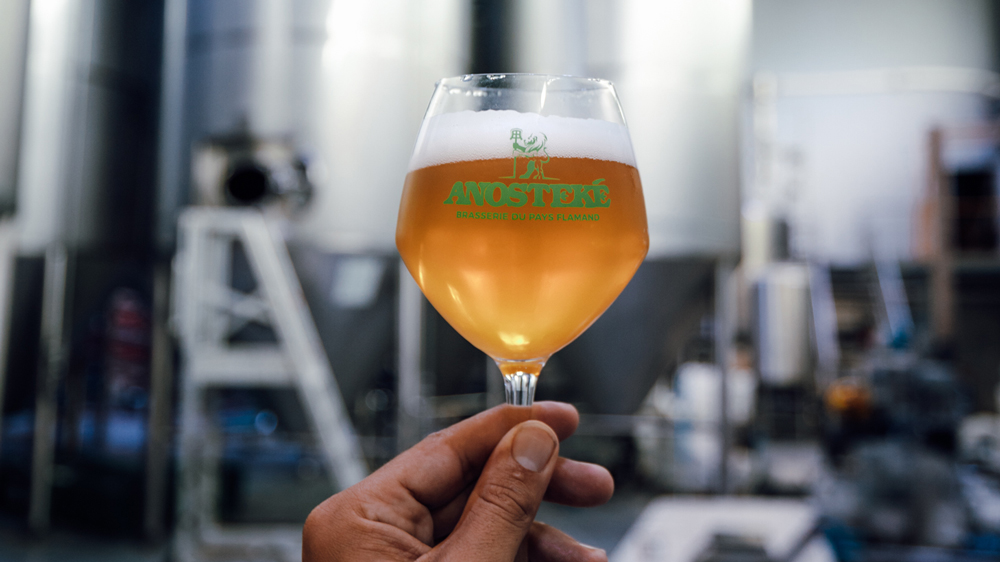 At the recent World Beer Awards in London, a 45-member judging panel sought out a pale beer to crown the globe’s finest. They tasted a variety of styles from kolschs to blondes to pale ales and a host of brews in between. The title didn’t go to Germany or America or Belgium or the Czech Republic, as you might have expected. Instead, they found the world’s best pale beer tucked into the corner of northwestern France.

Now, Brasserie du Pays Flamand’s Anosteké Blonde’s victory this past September is drawing the attention of international beer lovers to the pocket of French Flanders where its dynamic craft beer scene honors a long brewing heritage—but isn’t afraid to experiment.

It’s the second gong from the World Beer Awards the brewery on the outskirts of Lille—founded in 2006 by childhood friends Mathieu Lesenne and Olivier Duthoit—has won. In 2016, their Anosteké Saison was named the best in the category bière de garde. But this year’s triumph has given the brasserie greater visibility.

The judging panel praised the Anosteké Blonde, named after the Flemish expression “see you next time,” for having “Light dried-fruit characters, white chocolate and tropical fruit. Nice phenolic Belgian yeast character on the taste. Lovely full body and filling mouthfeel. Warming alcohol on the finish.”

For his part, in a phone interview co-founder Lesenne offered three words to describe the award-winning beer: strong, full-bodied and “convivial.”

A “convivial” or friendly beer?

Lesenne hears the skepticism at the other end of the line and is quick to elaborate.

Like beers from most craft breweries in the Hauts-de-France region, the Anosteké Blonde isn’t available in individual cans—and the majority of their bottles are sold in the 750 ml format, “Because our beer is for sharing,” Lesenne says.

“Bottles in 750 ml are equal to three glasses. They’re rarely consumed alone and are meant to be shared.”

At 8 percent ABV, the award-winning pale ale is also typical of beers from the Flanders region, which are usually high in alcohol in line with the heritage of farmhouse ales. An old brewing tradition in which farmers—usually the female of the household—brewed beers in winter and stored them until spring and summer, the beers were not produced to be sold but to be served to their seasonal laborers.

Moreover, along with storing the beers in colder temperatures, brewers understood that increasing the alcohol content helped prevent spoilage and the growth of bacteria and mold, Lesenne explains.

Where the Anosteké Blonde breaks with tradition, however, is that the pale ale is made with a mix of both French and American hops.

While attending an international beer salon in Strasbourg more than a decade ago, Lesenne and Duthoit sampled a beer from an American exhibitor and experienced a mini epiphany: American hops. “We looked at each other and said, this is extraordinary,” he remembers.

The year after, the pair traveled to the U.S. and discovered hops from the Yakima Valley in Washington, known for producing 75 percent of the country’s hops.

While French hops are more bitter, American hops tend toward the aromatic with notes of grapefruit and other citrus fruits, says Lesenne.

“And in a beer, you need both. You need bitterness to make the beer refreshing and lively, and you need fruity citrus notes to ennoble the beer,” he says. “It’s this mix of French and American hops that makes the Anosteké beer a success.”

At Blaringhem, the first of their two production sites outside the city of Lille, the brewery also runs a restaurant where they enlisted the star power of celebrity chef Florent Ladeyn, known in France for his appearance on Top Chef France in 2013, and for his sustainable, hyperlocal culinary philosophy—an ethos shared by the brewery.

So local is the Anosteké Bloemeke (bloemeke means little flower), in fact, that in lieu of coffee, which comes from abroad, diners are served a local version made with roasted malts and chicory. Likewise, dishes and recipes are pepper-free, and instead seasoned with juniper berries.

Spent grains from the brewery are also either turned into fries for the restaurant, or converted into biogas to fuel production.

“Our philosophy is to try to be as respectful to the environment as possible.”

Which is why, despite international demand including interest from China, beers will continue to be sold mostly locally in the region, with no plans to distribute internationally for the moment. Even within France, only a few Parisian purveyors (La Cave Don Doudine in the 18th and Bierocratie in the 13th) are distributors. Plans are afoot, however, to expand their production sites over the next year.

“For the environment, we’re content with selling locally for now. Our beers are everywhere in Lille,” Lesenne says. “We’re fortunate that we have a lot of demand in the region.”