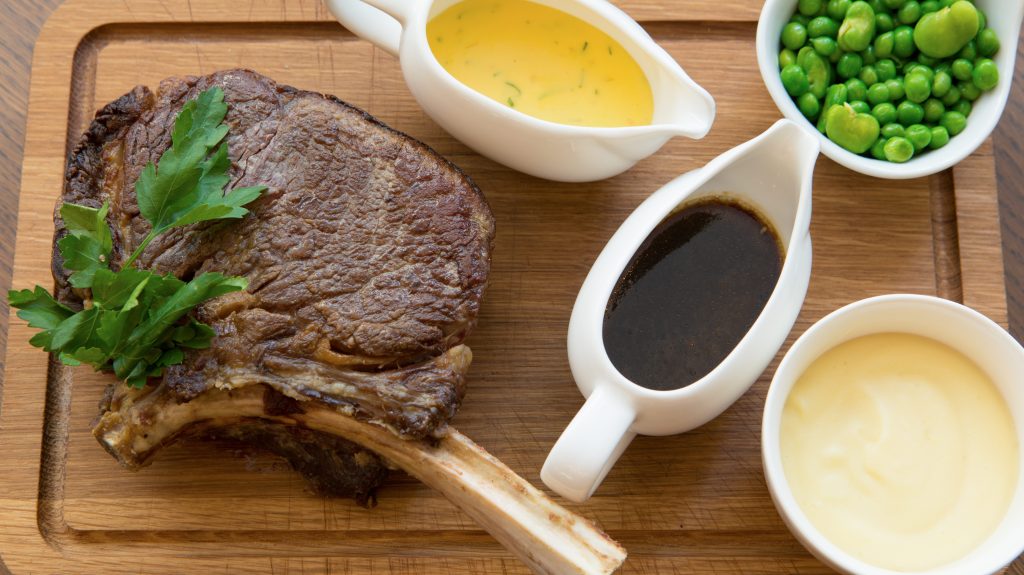 Michel Roux is not one to rush. Since opening Le Gavroche in London in 1967 and the Waterside Inn in the village of Bray five years later, the famed French chef has remained obsessively focused on his craft and extremely selective in his subsequent ventures—which makes a new restaurant from the Roux family a fairly big deal.

Michel and his brother and longtime partner, Albert, split their business interests in 1986, with the latter keeping Le Gavroche and the former the Waterside Inn. Michel’s son, Alain, took over as head chef of the Bray establishment in 2002 and has maintained its Michelin three-star rating ever since. (Its 34 consecutive years at that level are the most of any restaurant outside of France.) And that’s pretty much the way things stayed until this June, when the father-and-son duo debuted Brasserie Prince by Alain Roux at the Balmoral Hotel in Edinburgh.

Set on the ground floor of the Rocco Forte property, Brasserie Prince is the family’s first restaurant led by Alain from the start. His menu showcases Scottish seafood and other local ingredients, but the dishes are French bistro through and through. And while the casual fare and city-hotel setting contribute to a more bustling environment than in Bray, the restaurant’s success, says Michel, still rests on the Roux family’s trademark calm.

A new restaurant from the Roux family is a rare occasion. Of all the opportunities you’ve had over the years, what made you choose a brasserie at the Balmoral?
There were three reasons: Number one, the families, Rocco Forte and Roux, they complement each other. Their family business is very much in line with the Roux family business, and they have some of the most beautiful boutique hotels in the world. When you go to the Balmoral, well, it’s quite stunning. Number two, my son wanted a bit of a challenge, and he wanted to open something in the north, in Scotland. He’s been a few times and loves it. I’ve been to Edinburgh many times before, and I love it. And the third is that [my brother and I] opened the first brasserie ever in the UK [Brasserie Benoîts]. Our brasserie at the time was very much in line with what we’re doing at the Balmoral. What we were doing 40 years ago, we’re doing again today. So we’ve come full circle. It’s like fashion.

In the decades since you opened Le Gavroche, you’ve helped kick-start the careers of hundreds of chefs. How does it feel to see your son succeed at the Michelin three-star level?
The legacy to see the young people develop and do better than the master later on, I find it very rewarding. So I feel very, very proud. And I think to be able to cook three-star and to be able to cook bistro food, as well, you’ve got to know your classics. You’ve got to be modern, and you’ve got to be looking at the world. He has been traveling a fair bit. He’s been consistent. My son is not a guy who makes a lot of noise. He is very reserved, but he’s got some discipline, and he’s very good at cooking and pastry. I think he is not doing badly, the boy.

How are you two collaborating at Brasserie Prince?
He’s totally in charge. He contacts me when he needs me. He does the dishes . . . and invites me to test the dishes. I love eating more than cooking now because it’s more relaxing. I’m happy to cook for six hours, but the time of 10, 12, 14 hours in the kitchen is over for me. So, yes, he consulted me, but he consulted me when he felt like it. I mean, he’s 50 years old and has been working with me for over 20 years. I think he knows his stuff.

What can we expect to see on the menu?
He’s choosing some real dishes—brasserie dishes. Real food. Simple food. Like a lot of chefs, what is their favorite food? Bistro food. They don’t want to eat sophisticated food. So he’s been consulting the menu of [the brasserie] we opened in the ’70s in London, and he’s going to serve some of the dishes we were serving. You’ve also got dishes that will honor his grandmother, my mom. We will have tripes de Saint-Mandé on Mondays; black pudding on Tuesdays; veal blanquette on a Wednesday; on Thursday côtelettes d’agneau [lamb cutlets] Germaine—Germaine was my mother’s name; on Friday truite meunière [sautéed trout], very classic; then on Saturday we’ll have rabbit leg with mustard sauce; and on Sunday we’ll have beef bourguignon. We’ll have onion soup, gnocchi, frog legs, scallops, chicken quenelle, smoked duck, brown crab—in Scotland, you have the beautiful seafood. So many dishes! Obviously, we might have to reduce the menu a bit. Alain is being very ambitious!

How would you describe Alain’s style in the kitchen?
If we’re talking about three-star Michelin, he’s cooking more in line with the food today, using more what I would call new techniques and produce and herbs from the new world. Not much, but a little touch of that—it’s not fusion, let’s not get carried away there. It’s French food that he has developed to his own style and his own taste.

He will run the brasserie the same way that he runs the Waterside Inn—with calm. He will guide his people. He will readjust his dishes that need to be readjusted. He will tell people—take people away for a few seconds after the service—if something has gone wrong because it’s no good to draw a drama during the service. It makes things even worse. If there is some compliment for dishes or some part of the meal, he will certainly pass on the compliment to his people because the team in any kitchen is most important. Alone, you do nothing. . . .

My son is humble. I’m not humble. I certainly haven’t got the patience and diplomacy of being humble, but he is, and I like the way he is, his management skill. He is a good man. When he walks in somewhere, he doesn’t frighten people. He gives them confidence.

What are the biggest differences between running a restaurant in the 1970s and today?
It’s so much different that it’s not fair sometimes. In the ’60s and ’70s, you had to be a cook, a very good cook. You had to be a waiter at the front of the house—smile and serve food and so on. Now you look at what people do when they are eating—tweeting or sending a photo of their food, which I find pretty appalling. Sometimes they’re going for a cigarette in the middle of the meal. Those things would have never happened, you know. People were eating, enjoying their food and their drink, and the conversation was nice and soft. If something was not right, they would have pointed it out.

So the world has changed. You look at those themed restaurants and restaurants where everything is sparkling, and they spend millions into the decor and noisy places. Oh my god, the places where you can’t even hear your guests—everything is so different. If someone has left the industry for 30 or 40 years and will be back in today, I don’t think he will be able to cope with it or survive. It’s another world. It’s a bit like what’s happening in the world today, with politics, with everyone trying to show their muscles. It’s not pretty sometimes, but in the country, it’s a bit better. It’s more gentle. Not that we are protected, but when people are in the country, they have a different mind-set.

What hasn’t changed?
Well, the key of a successful restaurant—we can say that because it’s 34 years with three-star Michelin, and we’re doing 600 covers in five days, every week, all through the year—is really to be able to keep calm and be yourself. Don’t try to be someone you’re not in life. Leave that to the people who know nothing or the people who think they can make quick money.

A restaurant is a place where a chef who cooked the food likes to eat. But to do so he’s got to buy the best—not the most expensive ingredient, but the best-quality ingredient and cook it in the most simple way. Enjoy cooking what you like eating, and be honest. Only send food to the dining room that you’re proud of and want to eat. Then it’s got to be served in a clean dining room . . . where you feel good. It’s like if the place has been open just for you. That is, in my opinion, the key to success.