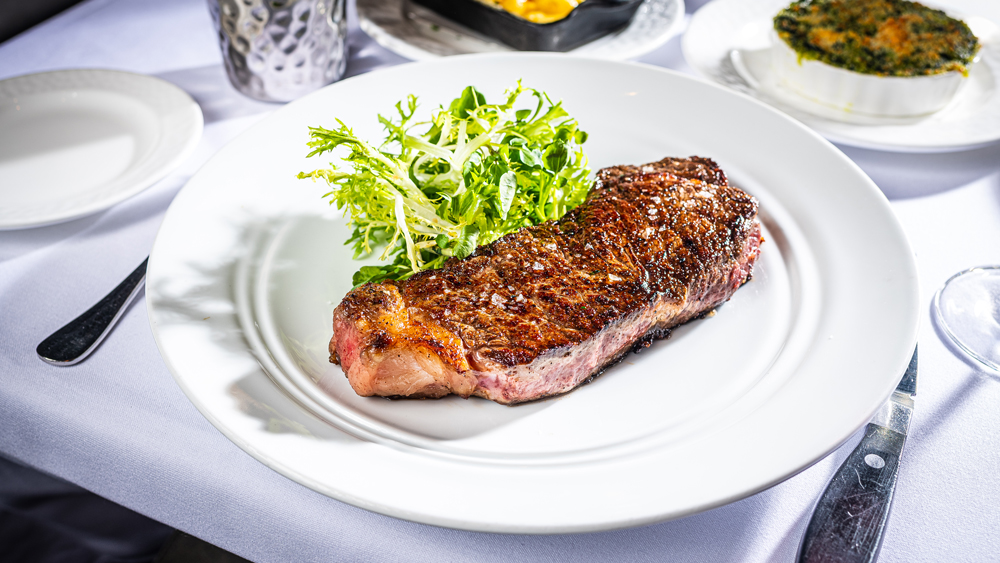 After 18 months of being dimmed, the dazzling lights of Broadway are turning back on. Live theater is ready to make its triumphant comeback with several mega-hit musicals—including Hamilton, Wicked, Chicago and The Lion King—returning at full capacity today, and many more shows raising the curtain in the coming weeks.

Broadway has long been one of New York’s biggest tourism drivers and a quintessential attraction to Midtown, a neighborhood that has suffered more than others during the pandemic. Fortunately, as the Theater District begins to reawaken, there are still plenty of excellent dining destinations in the area excited to host theater goers. After all, the show must go on. So get your tickets, book a reservation and make a night of it.

Here are seven of our favorite restaurants in close proximity to the theaters for an outstanding meal before—or after—you take in a performance.

Located at the base of the Grace Building, and only steps away from the heart of Broadway, is James Beard award-winning chef Gabriel Kreuther’s fine dining destination. The sophisticated Michelin two-star restaurant offers diners seasonal a la carte and pre-fixe menus showcasing refined Alsatian-inspired fare executed with classical French technique. Theater enthusiasts can enjoy a luxurious pre- or post-show meal in the elegantly appointed modern dining room or the lovely outdoor patio, which looks out to Bryant Park.

The latest addition to the esteemed Quality Branded restaurant group, Quality Bistro serves brasserie-style French fare in a sprawling, multi-room space on West 55th Street. The kitchen is helmed by executive chef Chino Parilla, who created a menu featuring both traditional and contemporary dishes—including some of the city’s best French onion soup and steak frites—paired with a 400-bottle wine list and French-inspired beverage program. Designed by New York-based creative agency AvroKO, the whimsical establishment is rich with gold details, lush greenery and elements evoking the Belle Epoque era. Theater goers can select their ideal setting—from the conservatory-style main dining room to covered tables in the outdoor garden to topiary-inspired private cabins—to savor dinner and drinks before hitting Broadway this season.

There are currently three Sushi of Garis open in New York (and each is outstanding), but the 46th Street outpost is located in the heart of the Theater District. For a culinary spectacle before your show, opt for the indulgent omakase experience: a meticulous succession of artfully crafted signature bites of the freshest fish paired with creative enhancements such as seared tomato, poached quail egg, chopped jalapeño and white truffle oil. The master chef and owner, Masatoshi “Gari” Sugio, deserves a standing ovation for presenting some of the most innovative and flavorful sushi in town.

Since its debut in the ’80s, celebrity chef Eric Ripert’s seafood stunner has earned countless accolades—including three Michelin stars, maintaining a four-star rating from the New York Times for more than two decades, and more James Beard Awards than any other restaurant in New York—and remains one of the finest establishments in the country, and in the world. At Le Bernardin, superbly prepared seafood and French fare shines on exquisite tasting menus (including a vegetarian pre-fixe)—and the entire experience is as well-orchestrated as any Broadway number. In honor of live theater’s return, a specialty cocktail named Cabaret (made with gin, St. Germain, egg white, muddled blackberry, cucumber, basil and Champagne) will be offered starting September 17.

Charlie Palmer’s eponymous steakhouse opened in mid-April on West 42nd Street—in the space previously occupied by the celebrity chef’s former landmark restaurant, Aureole. Harnessing the dynamic energy of its Theatre District neighborhood, this modern American steakhouse serves up bold flavors in a stylish setting. Palmer and chef Harold Moore, who oversees the kitchen, created the menu which boasts succulent cuts of red meat—from a Wagyu A5 Miyazaki striploin to a 30-day dry-aged prime porterhouse for two—and abundant sides, along with lighter dishes and a variety of seafood (including a full raw bar, grilled stuffed lobster and Dover sole meunière that gets filleted tableside). An extensive wine list and craft cocktail program round out the offerings, and you can’t go wrong with the 3-course pre-theatre dinner menu.

Only a few short blocks from the Theater District is a midtown dining gem. Set in a former garment factory, the spacious bi-level restaurant transforms you to a bygone era with inspired decor as theatrical as a Broadway set. Fashionable touches evoking yesteryear—from colorful spools of fabric to a wall of vintage hat boxes—are everywhere you look. The Ragtrader has something for everyone with a diverse menu of elevated American fare, an exceptional cocktail program, welcoming hospitality, and ample indoor and outdoor seating. Pro tip: keep the entertainment going after your meal—or a musical—by booking a table downstairs to Bo Peep, the sexy underground cocktail den (often named one of the city’s best speakeasies) that has live performances five nights a week by the gifted resident pianist and talented singing staff that belt out hits spanning decades.

Translated to “among the flowers” in Italian, Ai Fiori showcases modern interpretations of classic French and Italian Riviera cuisine. Since it’s located on the second floor of the Langham Hotel, the restaurant was only able to be open for a brief period of time at the end of last year (when indoor dining was allowed) since it didn’t have usable outdoor space. Yet just as Broadway is, Ai Fiori is steadily making its grand comeback—and recently unveiled a new outdoor oasis on the 11th floor called Sky Terrace. Enjoy signature handmade pastas made with seasonal ingredients, regional dishes inspired by the land and sea, and an award-winning wine list in the main dining room, or venture upstairs for an unforgettable alfresco experience complete with magnificent views of the Empire State Building.