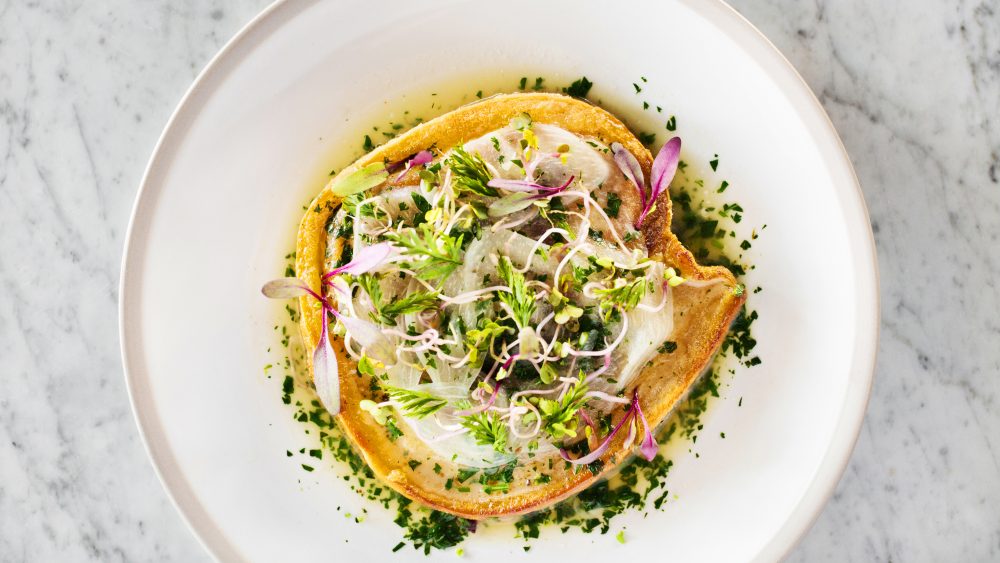 Garcia opened Broken Spanish five years ago after building a following running Fig inside the Fairmont Miramar in Santa Monica. He blended his fine dining training with growing up as a Mexican American kid in Los Angeles to create playful takes on foods like pork chicharrón and camote (candied sweet potatoes). The restaurant became part of a movement of Mexican fine dining, pushing the cuisine to get the respect it long deserved.

It wasn’t always easy, as the chef had to push up against the notion that Mexican food should be cheap. “I’ve overheard a customer in the restaurant say, ‘$14 for a tamale? That’s crazy!’” Garcia told Robb Report last year. “People see Spanish words or names of Mexican dishes and they assign value for what you pay for a tamale from the lady around the corner instead of what you pay for four ounces of grass-fed lamb, in-season mushrooms, corn, and someone rolling the tamales fresh. We’re still a lot less expensive than what our French or California cuisine counterparts charge for similar ingredients.”

But the tide did turn as the restaurant established itself as a Downtown LA fixture.  “We’re in a much different place than we were four years ago, when people would literally pick up the menu, put it down, and walk out,” Garcia said. When the pandemic hit, he quickly converted to takeout, even shipping his tamales nationwide. Now he’ll be opening his taco-focused ghost kitchen Mila, which will deliver across Los Angeles.

On Instagram, Zabala announced Somni’s fate this afternoon. “With a heavy heart, today after being opened for just 28 months, we have been told that hotel ownership will be permanently closing Somni,” he wrote. The 10-seat tasting counter nestled inside José Andrés’s restaurant Bazaar was also operated by Andrés’s ThinkFoodGroup. The two restaurants are closing after a contract dispute with the hotel’s owner, according to the LA Times.

Somni opened March 2018, serving a 20-course tasting menu that saw influences from both Zabala’s time at legendary restaurant El Bulli and the Basque food of his youth. The food was an inventive and playful twist on tradition and modernity. Zabala used modernist techniques in his food, but never tipped over into abstraction. More importantly, the dishes—like a little pizza that doesn’t have an actual crust, but a merengue made with tomato water that’s topped with cheese—were delicious. A real standout was a golden-brown bun that was almost like a light doughnut hole stuffed with braised pigtail.

When Michelin finally returned to Los Angeles last year with the advent of its all-California guide, the French tiremaker rightly deemed Somni worthy of two stars. During the Covid-19 shutdown, the intimate tasting counter didn’t really work to reopen when social distancing was required. “I strongly believe that this moment is only temporary,” Zabala wrote on Instagram. “We are now working to build an optimistic future. We have the talent, the resilience and we are strong.”