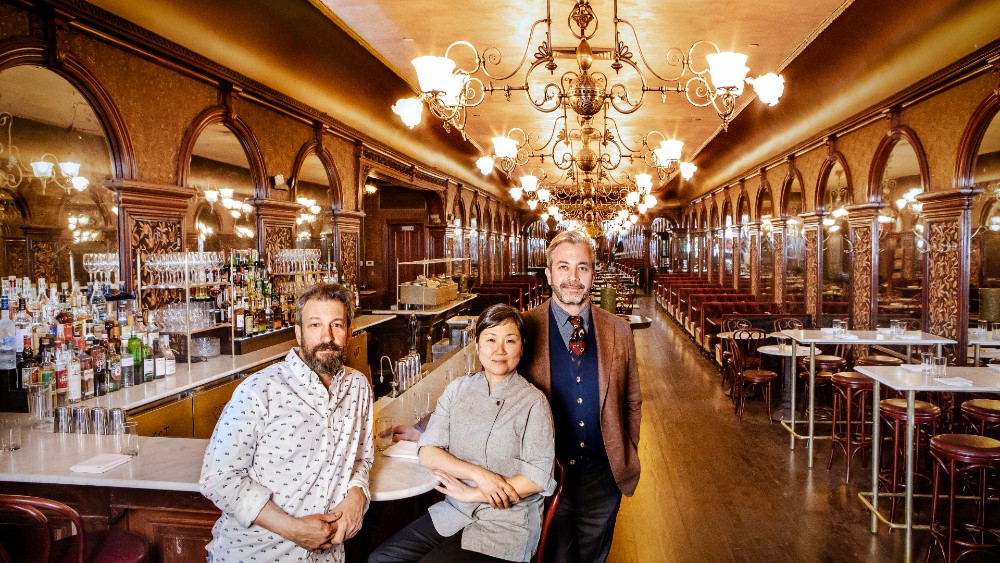 Restaurants have special significance in the lives of New Yorkers. Because apartments are so small, restaurants often provide the intimate environments for birthday celebrations, Little League parties, power lunches and even weddings. And for 125 years, Gage & Tollner chophouse in downtown Brooklyn was one of those venues, offering a grand physical space to match the emotional scale of those personal events.

The restaurant was so noteworthy during its time, in fact, with its cherry-framed mirrors and long mahogany tables, that it was designated a New York City Landmark. Yet, it shut down in 2004, leaving behind a four-story vacancy on Fulton Avenue and in the memories of many New Yorkers who considered it a second home.

But now, after a successful crowdfunding campaign led by a dedicated team of local restaurateurs, Gage & Tollner is coming back, restored to its original glory and serving a menu straight out of the Gilded Age. It will reopen on March 15.

“The goal was to create a place that when people who walk in here who haven’t been in this space in a long time, they kind of have a hard time remembering what’s new and what’s old,” co-owner St. John Frizell said. “We want it to feel very familiar to those people. We’re not trying to do something brand new.”

Built in 1875 as a private residence, the Victorian-style building was converted into a restaurant in 1879. For more than a century Gage & Tollner served luxurious dishes like steak and oysters Rockefeller in a glamorous dining room. In 1974 its interior was designated a NYC Landmark; the building was only the third in the city to be given the distinction, right after the New York Public Library and Grant’s Tomb. It was added to the National Register of Historic Places in 1982.

Then, about three years ago, Frizell, an owner of the Red Hook bar Fort Defiance, approached some friends about a new project: a tropical cocktail bar he would call Sunken Harbor Club. Those friends were Sohui Kim and Ben Schneider, a married couple, who own the Good Fork in Red Hook and Insa in Gowanus. Frizell would oversee the beverage program, Schneider the design and Kim would create the menu.

Kim had just finished her second cookbook and wasn’t looking to take on anything too intense, but a quaint cocktail bar sounded simple enough, so they agreed. Schneider and Frizell began looking for a structure to open it in. They toured building after building, but could never find the right spot. Then their real estate agent took them to a four-story brownstone in downtown Brooklyn. They were shocked when they walked inside.

“In New York restaurant circles, Gage & Tollner kind of had this mythical quality, especially after it closed, because then it existed in this quasi state—it was physically here, but it wasn’t a restaurant anymore,” Frizell said.

They wanted it. But not just for the cocktail bar. They wanted to rebuild it to its former glory.

“Immediately my response was, no, we can’t do that or I don’t want to do that,” Kim said. “It just seemed like a daunting project. But then, once I saw this space and we started talking about it, I got really caught up in the potential. And I was listening to the Hamilton soundtrack a lot, and I was like, why not us? We’re young, scrappy and hungry.”

They started off trying to finance the project the old-fashioned way: asking rich people for money. But they didn’t have much success.

“People were interested in it and they were positive about it and they were encouraging, but at the end of the day, they didn’t want to write the check,” Frizell said. “We felt like the project might be slipping away from us, that if we didn’t move fast, somebody else was going to.”

So, they took an unconventional route and launched a crowdfunding campaign in 2018, banking on the nostalgia of the place.

“It pulled at the heartstrings of a lot of people,” Kim said. “And because of that, our community grew from three people with this idea that we’re going to reopen this, to hundreds of people who believed in this project and really put their money where their mouth is.”

Community members were enthusiastic donors, contributing $1,000 here and $5,000 there. The partners ultimately hit their fundraising target—$477,000 from nearly 400 small donors—and were able to leverage that to get $1.5 million of traditional funding elsewhere, equity from large investors and even celebrities like actor Michael Shannon.

They signed the lease in 2019 and Schneider, the designer, began figuring out how to restore the 70-seat dining room, 40-seat bar and 60-seat private dining area. The interior is landmarked, so he couldn’t change all that much. Frizell threw himself into researching the space. He discovered a treasure trove of archive material that dated back to 1919 at the Brooklyn Historical Society. A descendant of one of the former owners had the foresight to donate boxes of ephemera to the organization.

“I don’t want to call them hoarders, but I think they were very conscious of the historical significance of the restaurant, let’s put it that way,” Frizell said.

There were 11 boxes full of menus, plates, press clippings, photos of the owners, photos of the employees, awards, bookkeeping ledgers and minutes of the corporate meetings, among many other items. They found even more boxes of historical material inside the restaurant when they began construction.

“It was always our intention from the beginning to be inspired by the past of this restaurant, not to try to create something wholly new, out of new cloth,” Frizell said. “So now, armed with all this research, we could use this as reference and go back and recreate as much of it as we wanted it to. The idea was to keep as much original that we could, while still building a restaurant that could function in the 21st century.”

Kim also consulted the trove of artifacts when designing her new menu. Reading through them was a history lesson in abundance and scarcity, law changes (like Prohibition) and evolving tastes. Some menus included oysters 20 different ways, sometimes dunked in butter, sometimes in cream, sometimes both.

“It was great to see all the menus of the past, but there was a bit of soul searching I felt like I had to do,” she said. “We don’t eat the way we ate 25 years ago, 50 years ago or 100 years ago. How is this world changing and what should we be eating? What should we not be eating? As a chef I grapple with these questions.”

She sought out more sustainable, local ingredients and sourced them from vendors she was familiar with, like greens from Zone 7 in New Jersey and lamb from Thistle Creek Farms in Pennsylvania. And she used a little less butter and cream.

Her menu, a collaboration with chef de cuisine Adam Shepard and pastry chef Caroline Schiff, ultimately nods back to the place’s history, but doesn’t replicate it. She pads the rest of the menu out with familiar and accessible dishes.

“I didn’t want to challenge anybody,” Kim said. “It was always the public house. The pub is very much where people gather to celebrate everyday things. And because we want Gage & Tollner to be that, we don’t want people to be here like once in a blue moon to celebrate something very special. We really want them to feel like they could come here just when the mood strikes.”

There are a few Korean influences on the menu, too. The clams kimsino is made with kimchi; broiled clam bellies are topped with miso butter; hen-of-the-woods mushrooms are paired with black garlic aioli and pickled chilies; and cauliflower soup is dotted with fermented shrimp. Kim, though, didn’t want to add too many Korean flavors; she feared “pushback” from diners questioning her skills in a chophouse kitchen.

“I gave some thought to what place an immigrant, Korean American female chef has in the larger history of Gage & Tollner. And I sort of put my foot down: a big one!” she said. “The professional kitchen or a really incredible cook’s pantry is very global now. Kimchi is not something that people hide in the corners of their refrigerators anymore. They sell it in vats at Whole Foods. It is an American condiment at this point.”

The drinks menu, designed by Frizell, highlights mid-century classics like martinis, sherry cobblers and Manhattans. He plans on opening his Sunken Harbor Club cocktail bar upstairs in the near future, along with a rotating display of the historical documents they unearthed.

Visitors have been streaming in before opening night, eager to tell the team about the times they spent in Gage & Tollner in years past. They don’t necessarily remember specific things they ate when they were inside, but they remember the way the place made them feel. In fact, many of them invested in the crowdfunding campaign.

Kim says people are so invested in them because New York is losing its past, especially its restaurant past. Decades-old restaurants are bought, stripped and reopened as trendy, modern hotspots. It’s palpable to old-timers and new transplants—the disappearance of the genuine, the precious.

“The more global we get, the way that we eat, the way that we travel and the way that we live, that uniqueness is somehow being lost,” she said. “I’m hoping that for a lot of people who are interested in the history of not just Gage & Tollner, but Brooklyn and, in a larger sense, New York City, you get to feel that here. And hopefully, we’ll have the service and the food and the drinks to match their expectation of how wonderful it really was.”

But that’s a lot of pressure, a daunting undertaking when people are investing—literally, with their own money—on memories.

“We’ve been trading on nostalgia in order to get the restaurant open, and now that we have everyone’s attention, we have to deliver, and that’s a lot trickier,” Frizell said. “It’s not going to meet the expectations of every single person that walks in here. But we think about it all the time and we’re going to try our best.”