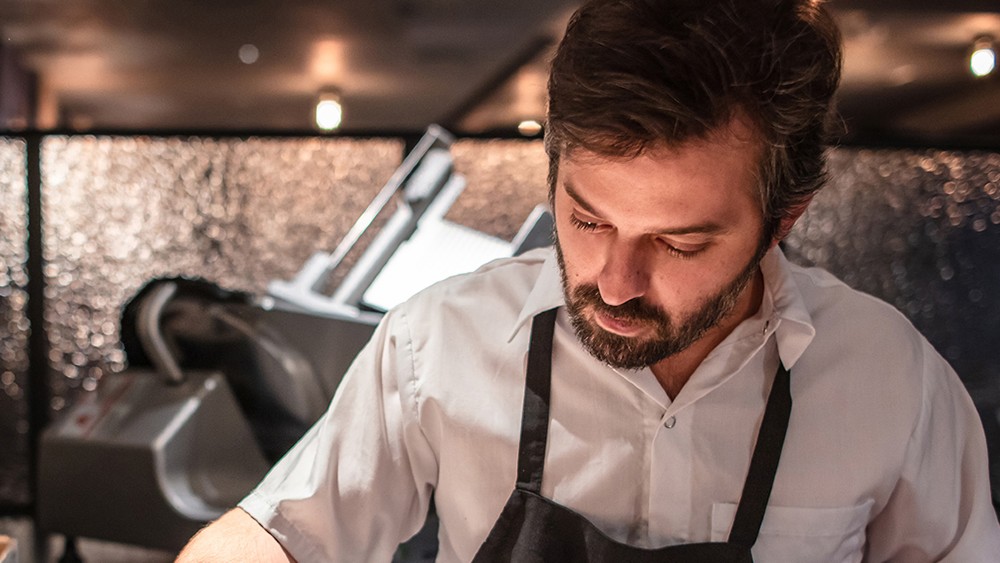 As season 12 of Top Chef barreled along, cheftestant Doug Adams could feel his discomfort growing. Part of him wanted out. “I was in so far over my head and I was lonely and homesick,” he says. “And not homesick for Portland—homesick like, ‘I want my mom in Texas.'” As he kept advancing to the next round, he couldn’t very well go home, but in the face of the pressure he connected with home in his food. The chef trained in classic French cuisine started finding success in cooking dishes like fried chicken for the judges. “I realized I didn’t have to do what I’ve been taught, I can take it and apply it to my own story.”

Doug was eliminated before the finals, but by winning the side competition Last Chance Kitchen, he returned and made it to the finale of the season. There, he just fell short against his fellow Portland chef Gregory Gourdet and eventual winner Mei Lin. But the experience had a lasting effect. The restaurant group he’d return to Portland to build became rooted in the Americana of his youth in a way he didn’t expect heading in.

He knew for his first restaurant, he’d want to scour Portland for an old building to house it. “It’s hard to find old spaces in Portland now, but with the food I do, I didn’t want some shiny new glass thing,” Adams says. He and his business partner Jen Quist found a home in two side-by-side building downtown from 1906 and 1920 that were being merged at the ground level and turned into the Woodlark Hotel. With an old building came some big problems though. “Connecting the buildings was a nightmare because one was wood-framed and the other steel and now with all the earthquake stuff, it took forever.” But they did all they could to preserve the charm of the old place, going as far as keeping the original penny tile from 1907 in the restaurant.

Betraying his roots, Adams christened the new restaurant Bullard—named for the small town he grew up in outside of Tyler, Texas. What he’d cook wouldn’t be limited to the Lone Star State though. He drew inspiration from everything between Texas and Oregon, and it shows in the menu and design. Like how in the little lounge out front of the restaurant, a nook filled with fishing rods and deep leather is so Montana-esque you feel like Robert Redford could have filmed a scene from A River Runs Through It there.

The array of influences converge in dishes across his menu. You can see the Texas in the smoked beef rib, but also an affinity for Tex-Mex in the smoky brisket tamale with cotija, as well as Gallic influence in the elk pot roast he braises in a classic French style with mirepoix and a pig’s foot that’s served with Robuchon mashed potatoes. And in a city where outstanding Thai restaurants like PokPok and Eem thrive you can see hints of it with his papaya salad.

Adams and Quist, under the banner of Holler Hospitality also opened the bar Abigail inside the Woodlark and run the all-day coffee shop in the hotel lobby. And yet, they managed to structure a deal where they’ve kept autonomy from hotel operations, bucking what had been negative connotations around hotel restaurants around town.

“Hotel restaurant was a bad phrase for a long time. Portland was a city that liked eccentric stuff in little pocket neighborhoods and not downtown,” he says. At a time when finding desirable real estate is tough to lock in for a restaurant in growing Portland chef restaurateurs have to look outside the norm. “For a long time, Portland was the city where Gabe Rucker could find a spot on East Burnside and buy it and smoke cigarettes behind the line and cook whatever he wants. But it’s changed, the joke now is that restaurants are owned by accountants.”

The duo are deep into planning for their next restaurant, which will also be a combination of the food Adams grew up loving and a savvy real estate partnership for the space. Holler will be devoted to fried chicken and be located inside a new apartment building. “In business and in the kitchen, it’s about making the most of what you have, and as the world changes, change with it.”

Texas, Oregon and a lot in between.  Photo: courtesy Christian Harder