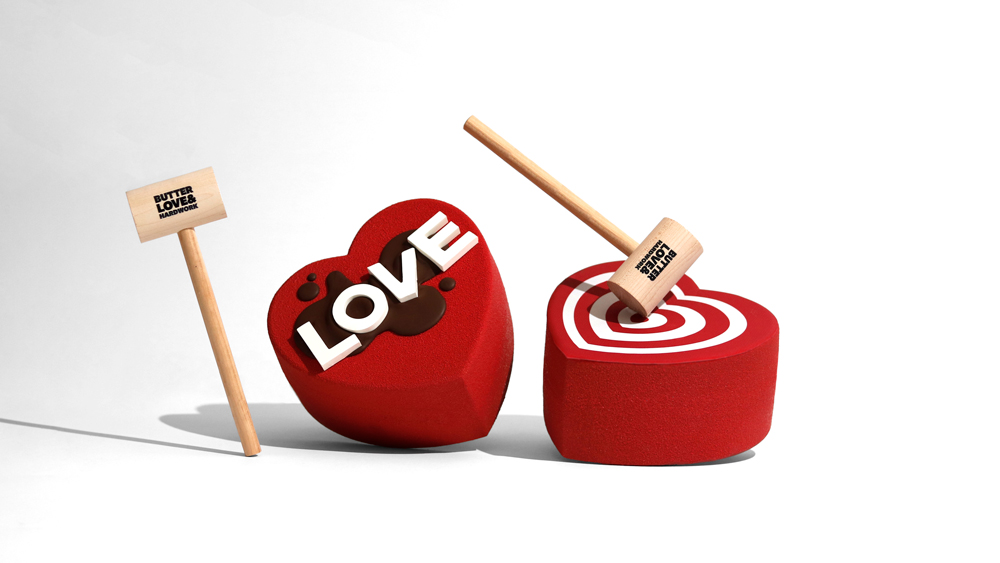 Valentine’s Day during the pandemic is going to hit a little different, so we totally understand if you feel like hitting back.

Chris Ford, a Los Angeles pastry chef known for his meant-to-be-broken desserts and his celebrity clientele like Kim Kardashian, just released a new collection of ultra-fancy chocolate treats that you smash with a mallet. The Valentine’s Day collection from Ford’s ButterLove&Hardwork brand includes a $150 bullseye heart (a play on Cupid and his arrows, of course) and a jumbo $225 teddy bear that’s nearly a foot long.

When you crush these treats, you’ll find candy including chocolate truffles inside. It turns out that breaking your heart (and maybe even posting about it on social media) can be a lot of fun. The former pastry chef at the Beverly Wilshire recognizes the restorative feeling of smashing something during the pandemic. After all, his recent Naughty Or Nice holiday collection included a “F*ck 2020” ornament with spiced caramel truffles inside.

“People want something experiential, and I think getting something that’s almost too beautiful to eat and then breaking it is definitely cathartic,” Ford says.

In LA, Ford’s shattering confections are something of a sensation. He has Chrissy Teigen to thank for the early boost. She contacted him in 2016 when she wanted to buy Easter baskets for her friends. One of the friends was Kardashian. Kim K became such a fan that she later Instagrammed about Ford—a major coup for any person or business hoping to boost their online clout—and so he kept the chocolate flowing to her Calabasas compound.

“I sent her something for Christmas,” Ford says. “And I was actually in Africa on my engagement trip when I got a call from her.”

Kardashian wanted Ford to create chocolate heart boxes with her new fragrance line inside. Tastemakers like Teigen and Busy Phillips swooned when they got their hearts and media outlets from People to Elle wrote about Ford’s creation. After the buzz surrounding that launch in 2018, Ford has stayed busy working for A-listers.

“A lot of it has just been word-of-mouth,” he says. “Through Kim, I did a collaboration for Madonna’s skincare line.”

Ford’s career in ready-to-break chocolate started with Easter eggs he made in 2015 when he was corporate pastry chef for Bryan Voltaggio’s Washington D.C. restaurants. After moving to Los Angeles, he started making chocolate hearts and other breakable treats at the Beverly Wilshire. His work has been a smashing success ever since. But he’s quick to point out that he understands how fortunate he’s been.

“I always say I didn’t invent anything—I just took it to a platform where it wasn’t,” he says. “This is very big in Spain. And even growing up [in America], you had like bunny rabbits filled with chocolate that you break. I really love things that are interactive and nostalgic.”

While his customers are having a good time destroying things, Ford has built a business that launched its own custom chocolate line last week. Known as Love, the new confection is a 66 percent baking chocolate that’s made in Paris with cacao beans from Ghana and Ecuador.

Ford, after becoming an ambassador for chocolate brand Cacao Berry, went to Paris in 2019 to develop his own blend. With a team including a chocolatier and a food scientist, Ford went through four tests of different chocolate from around the world. He ended up with something that should appeal to fans of both milk chocolate and dark chocolate.

“It’s very dark chocolate-forward, like you’re biting into a really dark, gooey brownie,” Ford says. “And then it finishes very milky. It kind of goes up and down the back of your mouth with these milky notes. Yeah, that’s Love.”

You can buy ButterLove&Hardwork’s items on its website, with nationwide shipping available for products including chocolate hearts and chocolate bars. (The teddy bear is exclusively for L.A. delivery.) And the new Love baking chocolate ($45 for a 1-kilogram bag, with $1 donated to Feeding America) will also be available for Valentine’s Day on the Williams-Sonoma website and later this year at Williams-Sonoma stores. He hopes this will grow his already devoted fanbase that keeps coming back to shatter his creations.

“For a lot of people, it’s become a tradition,” Ford says. “Almost everyone reorders for Valentine’s and Christmas, and it’s been a tradition for their kids and for engagements.”

It turns out that breaking things can be habit-forming. So here’s something that might cheer you up during the pandemic: After your chocolate is gone, you still have the mallet.