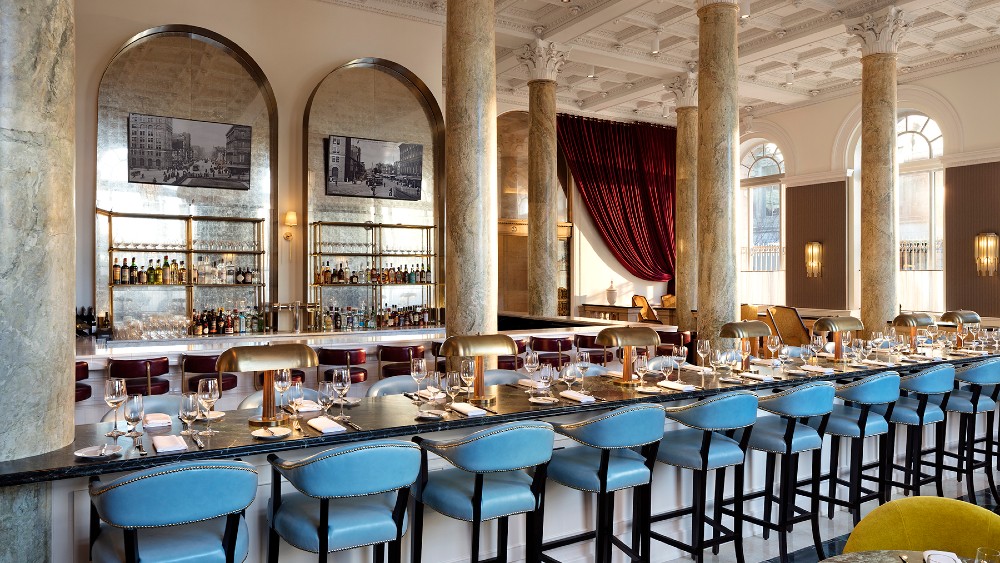 Walking into Café Riggs, it’s hard not to have your gaze wander up to the ceiling as your jaw ventures down toward the floor. Your eyes are drawn to the row of Corinthian columns that stretch 22 feet up to the ornate coffers above, while running parallel to them, large art deco chandeliers illuminate the dining room’s luxuriant furnishings. It would be hard to find a new restaurant space grander than the one inside Washington DC’s recently opened Hotel Riggs.

“I’d be absolutely lying if I said it wasn’t intimidating,” says Patrick Curran, the chef tasked with creating dishes that befit the architecture. Echoing the scale of grand European cafes, Riggs is the type of place you’d expect to have a caviar service cut from the same mold, with traditional accoutrements of blinis, crème fraiche and a mother of pearl spoon. Is that what Curran did? No. He’s kept any sense of stuffiness at bay and created a menu playful enough to feature a $98 caviar grilled cheese sandwich that people have actually been ordering.

That sense of whimsy is by design. After all, parked prominently by the entrance there’s a 15-foot-tall installation of faux flowers inside a towering wood and glass case that practically screams, “Don’t take us too seriously.” And in kind, Curran has brought a high-low energy to the month-old restaurant that would make him feel comfortable at off the clock. “I’m usually the guy who’s slightly underdressed at one of the fancier spots. When I’m not in my chef whites, I’m usually in jeans and Sperrys and a T-shirt,” he says. Hence, he’s made Café Riggs a restaurant that’s no stranger to dignitaries filling the dining room at lunch and Washington Capitals fans packing the bar before a game.

Curran has rooted his all-day menu in a classic French brasserie, but with a willingness to turn tradition on its head. He comes by that honestly, influenced by his time as the opening chef of David Chang’s first restaurant in the area, Momofuku CCDC. Chang has long had a fraught relationship to tradition, pushing hard against it at times, while also championing the classics when he feels they truly deserve it. On Café Riggs’ menu, Curran doesn’t always feel the need to improve on a good thing. “With our steak tartare I did a couple different versions and we ended up with a super classic with Dijon mustard, capers, a quail egg and shallot because it’s so good,” he says.

And yet, more often than not, he’s looking to tweak. Using the omnipresent Maryland crab found on menus throughout the region, Curran could have been content with a crab Louie or crab cake, as most would expect. “Crab is king here and if you mess with it incorrectly, you’re going to be crucified for it,” Curran says. He took the risk anyway, mining the Asian influences in his cooking career to create a chawanmushi—a Japanese egg custard—that has the flavors of a crab cake and is topped with a crab salad. “You have that classic DMV area crab cake, but it’s our spin.”

Another nod to modernity is the “Plant Dishes” section of the menu offering up vegetarian fare not as sides to go with your chops, but stars in their own right. And, of course, there’s that caviar grilled cheese sandwich that rethinks caviar service. It’s not as out there as Kraft singles on white bread with a quenelle of caviar. No, it’s toasted brioche filled with whipped vache (a cow’s milk cheese made in the style of goat’s milk) and then topped with an ounce of Ossetra caviar. And even one month in, Curran has found the excitement around the dish to be an effective advertisement to sell more. “I’ve been surprised,” he says. “It’s a little bit of the sizzling fajita phenomenon—someone sees it go out and they next table will be like ‘What’s that?’ Someone explains it and they’re, ‘I’ll try that.'”