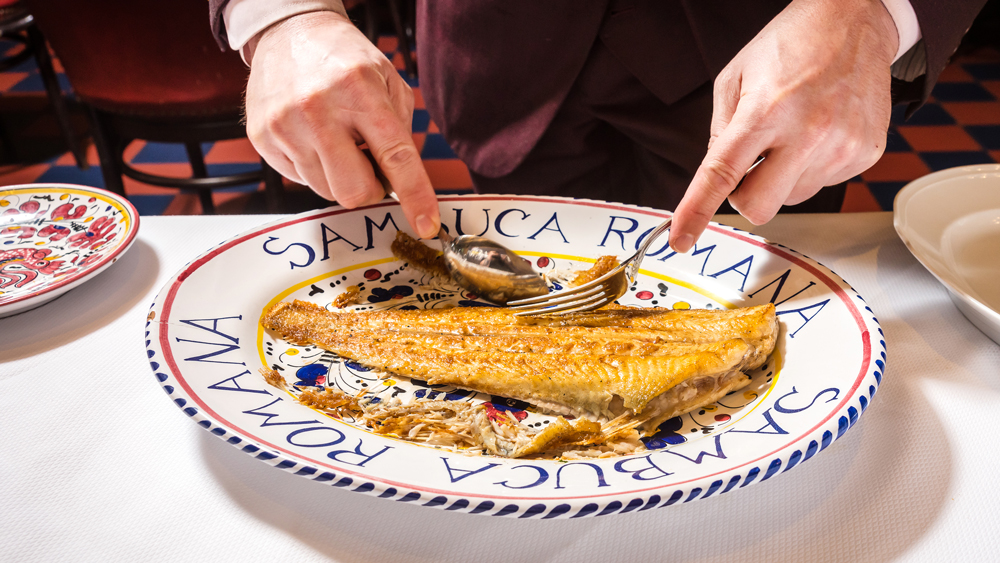 This new Carbone, which opened Tuesday in the ritzy South of Fifth neighborhood that’s home to numerous ultra-luxury condo buildings as well as dining mainstays that include Joe’s Stone Crab and Prime 112, aims to dazzle in many ways. The restaurant at 49 Collins Ave. has a lush and ornate Ken Fulk design along with artwork selected by Vito Schnabel. Captains dressed in custom Zac Posen tuxedos are here to guide customers through the menu. Guests can see their Caesar salad prepared tableside, of course, and then feast on big plates of pasta, steak and lobster fra diavolo.

This restaurant is the first piece of a massive Miami expansion for Major Food Group, the hospitality company run by Carbone, Rich Torrisi and Jeff Zalaznick. Major Food Group, which opened the original, Michelin-starred Carbone in New York in 2012 and then brought the upscale red-sauce brand to Hong Kong and Las Vegas, are also working on restaurants in Miami’s Design District and Brickell neighborhood.

First up in the Design District is a private member’s club with Japanese food. That space, which will open in March, will include a 20-seat omakase bar helmed by two sushi chefs. There will also be a 100-seat indoor/outdoor restaurant, a cigar lounge, a bar and what might be a backgammon room in the two-story building.

Major Food Group then plans to open a retro-style French-inspired steakhouse in Brickell this September. That will be followed later in the fall by a two-story Italian restaurant in the Design District. That space will have a relaxed-chic cafe vibe downstairs and elegant trattoria food upstairs.

Carbone and his partners have long been fans of Miami, and opening in such a major way here feels surreal to them.

“I remember vividly one of the first trips we took here together,” Carbone says of his 2012 visit for the South Beach Wine & Food Festival. “We had an absolute blast. If you told those kids who were drunk at La Sandwicherie back then that they would be opening on First and Collins, that would have been their dream come true. That’s as good as it gets.”

Carbone and Zalaznick both point out that they’ve had many trips to Miami where they immediately went to eat at Joe’s Stone Crab after getting off a plane. Having their own restaurant that’s a short walk away from Joe’s makes them want to pinch themselves.

“Miami is a place we’ve come to for most of our lives, whether it’s for Art Basel with Vito or other events and celebrations,” says Zalaznick, who now calls Miami home. “I think the location of Carbone in Miami is super iconic. I make this joke all the time: If you had told me I was going to be a restaurateur years ago and asked me where I wanted my restaurant to be, I would have pointed directly in between Joe’s Stone Crab and Prime 112. I can’t believe where we are now. That’s what I would make up as, like, the obvious answer of where you want your restaurant to be. And for Carbone, it just feels incredibly right.”

This isn’t a story about New York talent flitting down to Miami for a little while. Carbone says he sees himself being here “for the foreseeable future” while Torrisi holds down a lot of things in New York. And the team for Carbone in Miami includes veterans like executive chef Jonah Resnick and front-of-the-house superstar Louie Carbone (Mario’s cousin), who both also opened Carbone in New York, Hong Kong and Las Vegas. Resnick, in fact, moved from Vegas to be here. Mixologist Thomas Waugh is in Miami now too.

“We brought down an incredible squad,” Mario Carbone says. “We joke that it’s Ocean’s 11. It’s basically one person per micro-department, everyone from management to somm team, captains, back waiters, runners, chefs, pastry chefs and bakers. I think it actually is 11 people we brought down. A lot of them have been with us since almost day 1, so they’re coming up on a decade with us.”

Major Food Group will open another Carbone in Dallas later this year. The team also has its eyes on other cities around the country. But Miami is the one that truly feels like home now.

“I’ve been here for the last 10 months,” Zalaznick says. “As I spent more and more time here, I really realized that this city is an incredible place to live and work in a full-time capacity.”