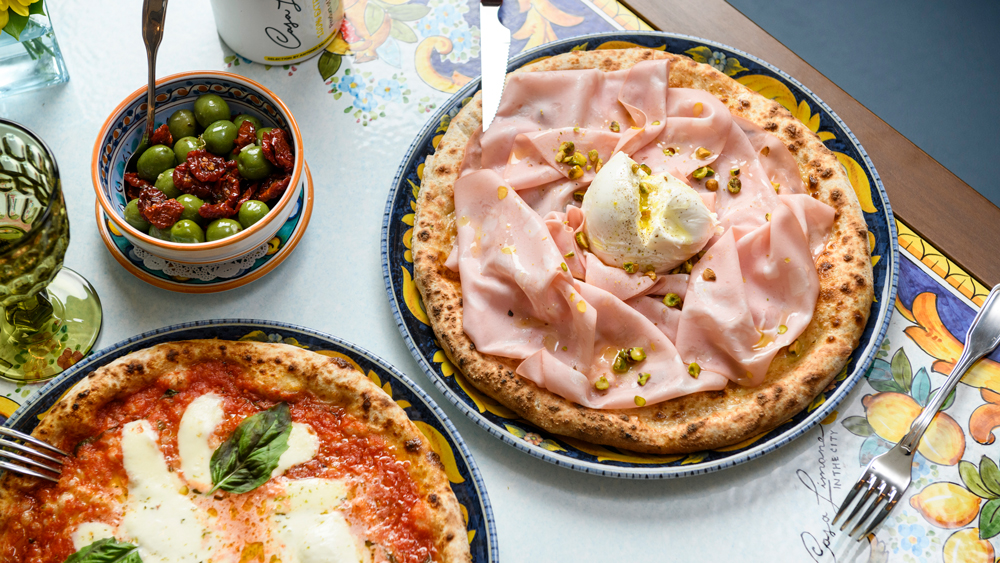 When southern Italian chef Antonio Salvatore recalls home, he smells lemons and oranges. He hears the tink, tink, tink of silverware and wine glasses on outdoor dining tables that line the charming streets. He tastes creamy burrata and charred octopus. And it’s those sensations, that ambiance and those flavors of the Mediterranean that the Michelin-starred chef wanted to import to his first restaurant in the U.S.

Salvatore, who was awarded his first Michelin star earlier this year for La Table d’Antonio Salvatore, located underneath the famed Monaco restaurant Rampoldi, will open Casa Limone in Midtown Manhattan June 8. He has been working on the project, his first in the U.S., for two years.

Growing up in Basilicata in the Italian Mezzogiorno, neighbored by Puglia, Calabria, Campania and Sicily, Salvatore remembers a lot of neighbors emigrating to New York. He had always fantasized about doing the same.

“For me, New York is like a dream,” the chef and business partner said. “I want to share my heart, my emotion with the American public … I’m humbled to open a new restaurant in the United States during these unprecedented times and this period of recovery. To be able to present versions of the dishes and ingredients I grew up eating to a world-class city like New York is a career highlight.”

In fact, many of the ingredients used in the kitchen—from tomatoes and salami to tuna and cheese—are imported directly from Italy. Those products are enhanced with local, seasonal produce like asparagus and eggs sourced in New York. Casa Limone will not only offer the tastes of home for Salvatore, but also the breezy atmosphere of dining al fresco on the Amalfi Coast.

The 133-seat restaurant is split between two levels. The ground floor contains a dining room with plush, orange velvet chairs, a white marble bar with blue velvet barstools, a forest green banquette and flower-covered lattice that peeks into the kitchen. The second floor resembles a pergola covered with vines and hanging flowers. The walls are paved with stones and dotted with authentic window shutters, bottles of limoncello and hand-made ceramics. The seating and banquettes—colored mustard yellow, royal blue and teal—look back into a Forza Forni wood-burning pizza oven.

Additionally, some tables are constructed out of Pietra Lavica from Campania, and each one holds Murano water glasses, hand-painted plates from Sicily, and a bottle of the restaurant’s custom, extra virgin olive oil blend from Puglia.

“We wanted to promote authentic, southern Italy, with dishes, with colors, with feelings,” Salvatore said. “I don’t think Casa Limone is casual. The products are very high quality, the best from Italy, the best from America. The dishes just look different [less formal, more contemporary]. Every dish is my vision. Everything I do is from the heart.”

How could you not want to eat dinner here?  Photo: courtesy Casa Limone

Later in the day, pasta and Naples-style pizza reign, but don’t expect rustic presentations; many are finished tableside. Take the hearty Timballo alla Trapanese pasta dish, for example. Anelli pasta is baked with thinly sliced eggplant, salami, mozzarella and peas and served atop tomato sauce with a dollop of pesto. Provolone fondue is poured over it at the table.

For dessert, look for gelato, cannoli and the chef’s take on Naples’ famous Rum Baba: Cake is soaked in Zacapa rum at the table, garnished with whipped vanilla cream and fresh berries and then spritzed with rum syrup from a vintage-style perfume bottle. On the beverage side, Casa Limone will offer classic Italian cocktails like the Aperol Spritz and the Negroni Americano, plus Italian wines by the glass or bottle.

Casa Limone is only the first restaurant for the new Monte Carlo Hospitality Group; they have also taken over operations of Lincoln Square’s Atlantic Grill, which will reopen later in the summer, and in 2022, they will open Monte Carlo Patisserie in New York and a second location of Rampoldi, the restaurant’s first and only expansion in 75 years.

A taste of the Amalfi Coast.  Photo: courtesy Casa Limone

For now, chef Salvadore is flying back and forth between New York and Monaco to work on his various projects at once. But he has plans to move his family to New York in the future, just as he did as a child.

“America has so much opportunity. There’s a lot of energy. It’s exciting,” he said. “I think, we’re still young. Why not?”

And his dream has taken on a distinctly adult slant as well—he wants to earn another Michelin star stateside.

“Of course, when you have one you want more,” he said. “With every challenge, I want to be the best.”