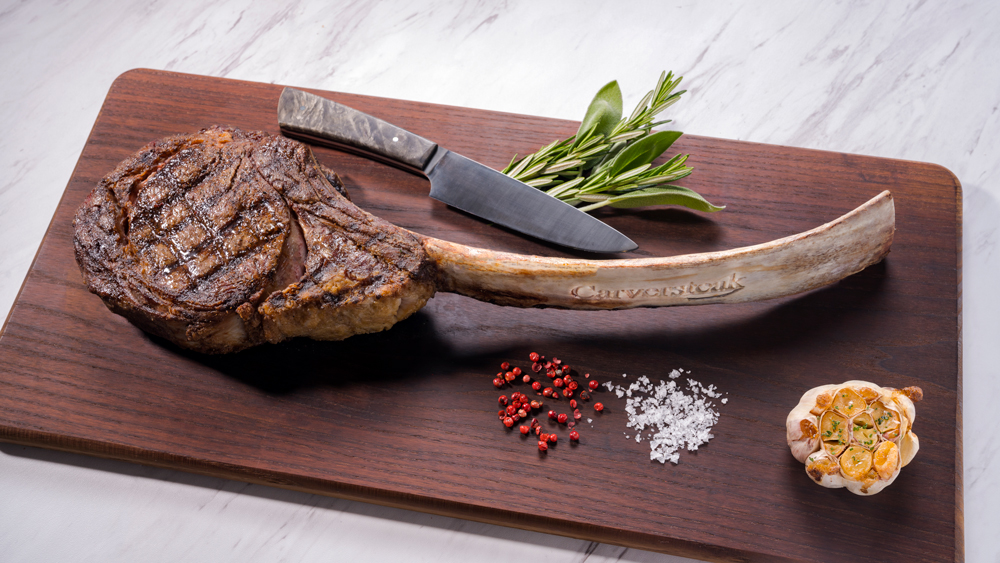 As a longtime hospitality entrepreneur and former casino executive, Las Vegas scene-builder Sean Christie has been deeply involved in blockbuster openings like Encore Beach Club, Roy Choi’s Best Friend and the Mayfair Supper Club. Now he’s got a new company, Carver Road Hospitality, that’s developing restaurants and bars all over the country. And he’s getting ready to put his spin on a quintessential Vegas experience: the steakhouse dinner.

Carversteak will open at the new Resorts World Las Vegas casino on December 30.

“I really want to go back to my core roots,” says Christie, who’s also creating the Flanker Kitchen + Sporting Club in Salt Lake City and both a restaurant and a rooftop bar at Jason Pomeranc’s forthcoming Civilian Hotel in New York City’s Hell’s Kitchen area. “What I really want to do is what I’m doing now, building a company from the ground up and really just trying to wow people.”

At Carversteak, this means spending almost $1.5 million on audio-visual elements, including a giant LCD screen that spans the length of a 70-foot bar and will display animated art. The screen could also be used for welcome messages during private gatherings or occasionally turn into a huge television for sporting events.

“The space has to be able to transform, especially in Las Vegas,” Christie says. “It changes depending on what convention, what fight, what concert’s going on.”

A rendering of the private dining room.  Photo: courtesy Carversteak

Christie and chef Daniel Ontiveros (who previously cooked at Bouchon, Joël Robuchon and the Scotch 80 Prime steakhouse) want dinner at Carversteak to be an interactive affair. Servers will present a wooden box with five kinds of custom-made knives featuring different blades and distinct handle designs.

“It’s kind of a ‘choose your own weapon,’ if you will,” Ontiveros says. ”I think it’s just a cool experience. It’s going to be a fun talking point.”

After selecting a knife, guests can enjoy Allen Brothers bone-in filets (part of a filet section of the menu that also features bison filets), dry-aged Flannery Beef rib eyes and American wagyu tomahawks with the Carversteak logo etched onto the bone by famed butcher Pat LaFrieda. Carversteak will also serve Japanese wagyu, including Miyazaki A5 strip loins, and Australian wagyu.

Steaks, brushed with a compound butter that includes shallots and reduced red wine, will be cooked on Montague broilers that can get up to 1,200 degrees. The butter is one of many thoughtful touches on a menu that involves Ontiveros merging classic steakhouse fare with his Vegas fine-dining background.

“It’s a challenge because there’s a lot of people who say you can’t do fine dining in steakhouses,” Ontiveros says. “I’m a firm believer that’s not the case.”

Ontiveros will put his stamp on the menu by pairing caviar with sourdough honey crumpets alongside traditional garnishes. He’ll make lobster en croute with a whole Maine lobster inside a puff pastry shell and some red-pepper cognac cream. He’ll plate hamachi crudo in an elegant fashion like he would at a tasting-menu restaurant that serves tweezer food. In addition to offering chilled seafood, he’ll have hot shellfish platters with lobster, shrimp, oysters, clams and mussels that are roasted in the kitchen and then flambéed tableside.

“The flame will kind of dissipate, and then we’ll just kill the rest of the flame with some garlic-yuzu chili butter,” Ontiveros says.

All the while, Christie and his front-of-the-house team will carefully calibrate the mood of the room.

“How do we create energy and adrenaline without being a quote-unquote noisy restaurant, right?” Christie says. “That comes down to design, layout and technology. We have control of every single one of our lights, every single pin spot. We control every single speaker, so we can meet the needs of the environment. If it’s 1 am and the restaurant is going late because there’s a giant Tyson Fury fight in town and there’s a bunch of celebrities, hoity people and execs that are entertaining people, there’s probably a lot of adrenaline going on.”

Carversteak is ready to adjust for moments like that, but Christie and Ontiveros want this to be a destination restaurant more than a party spot. Because Christie comes from a nightclub background, he’s been inspired by the work of Ian Schrager and how the Studio 54 legend went from nightlife to many different facets of hospitality. Christie has also seen how new-school hot spots like Catch Steak and Maple & Ash have turned steakhouses into a lively and modern dining experience where good food merges with an energetic scene.

Being in Vegas, of course, gives Christie an advantage.

“Las Vegas is about bigger, better and more aspirational,” he says. “If you just wanted your traditional restaurant, you can get that in your own neighborhood.”

Christie has run clubs where customers regularly spent tens of thousands on bottle service to flex their wealth, hang out with beautiful people and make memories while drinking $8 Fiji waters. At Carversteak, he’ll be ready to give high rollers a more tangible option. The steakhouse will offer a $40,000 cocktail package that includes a version of mixologist Francesco Lafranconi’s the B Signal cocktail (an agave-forward riff on an Old Fashioned) made with rare Clase Azul Ultra tequila. Order this and you get the drink, the entire bottle of tequila, a decanter, a cocktail class with Lafranconi and a Rolex GMT–Master II “Batman” two-tone watch that simultaneously displays the time in two time zones. Christie bought this watch at a Keep Memory Alive charity auction.

“We’ll actually lose money on this,” Christie says. “There’s always a lot of interest in those types of items when we put them out. We only have one of them. It’s a way for someone to go back home with a piece of Carversteak, with a story, with the experience of Las Vegas, which, again, is always bigger, bolder, brighter. And I love that the money went to a charity, which is the most important part of the story.”