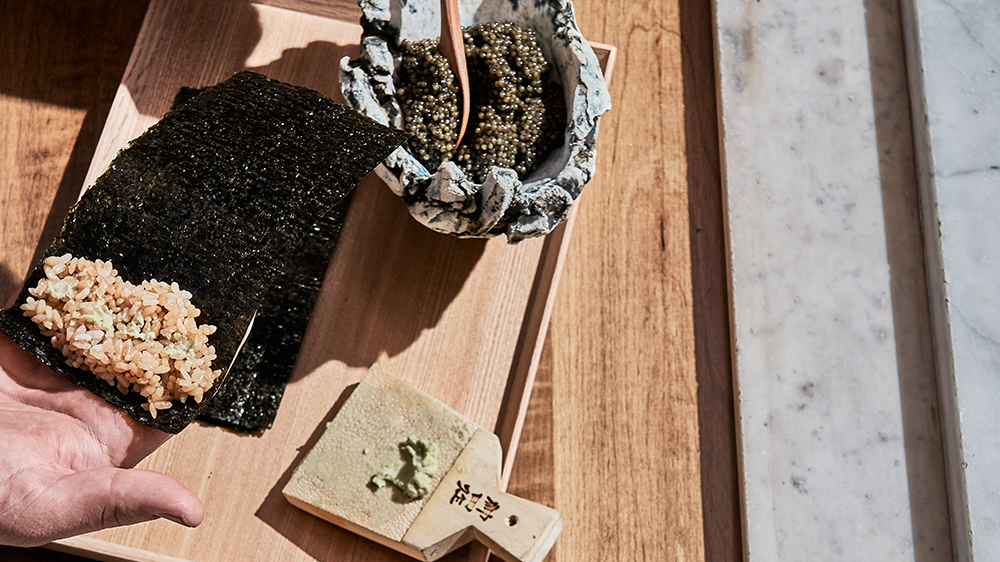 Forget mother-of-pearl spoons. It turns out caviar should be served on mozzarella sticks. That’s how Andrew Carmellini dishes it up at Carne Mare, in New York City, and he leaves no doubt that the bar snack is the supporting player: “I don’t put it on anything unless it’s about the caviar—that’s why the mozzarella stick works,” he says, noting that the fried cheese exudes the same soft, lactic tang of crème fraîche.

And Carmellini isn’t alone. Chefs are slinging caviar like seasoning salt, tossing it onto tater tots, waffles and arepas; there’s a full ounce in the hand roll at the new 63 Clinton on Manhattan’s Lower East Side. In San Francisco, at Tyler Florence’s steak house Miller & Lux, servers parade caviar-topped brioche doughnuts around the dining room on silver trays. “Chefs have learned how to communicate with caviar,” says the chef, restaurateur and Food Network host. “It doesn’t need to feel precious.”

And in fact, caviar is just not as precious as it once was. The US Fish and Wildlife Service banned the importing of caviar from endangered wild beluga sturgeon in 2005; consequently, farmed-caviar operations proliferated from the Florida Panhandle to Thailand to Madagascar.

A flood of farmed roe drove down caviar’s wholesale cost by 50 percent between 2012 and 2019. Much of it was from China, which, according to Edward Panchernikov, director of operations of Michelin-starred Caviar Russe, in New York, has now “taken over most of the world’s caviar production.” Chefs could suddenly afford to have fun with a luxury ingredient, and legacy importers found themselves competing with entrepreneurs such as Ariel Arce and Michelle Double, who launched direct-to-consumer Caviair in late 2020.

Arce, a New York restaurateur and sommelier, has worked for years to make Champagne more accessible, and she’s betting she can do the same for caviar. Her goal, she says, is to sell the “Provençal rosé” of caviar—young and approachable—and then help customers move on to the serious stuff.

The bar at Caviar Russe on Madison Ave.  Francesco Sapienza

Part of that proposition means selling at a lower-than-market markup across its inventory, from entry-level Chinese kaluga to a rare golden osetra from the Netherlands. “We noticed with these large companies that their whole brand was about luxury and wild caviar from the Caspian Sea, but now they’re selling farmed caviar from China,” she says, adding that while “Chinese caviar is excellent, depending on where you’re getting it,” her objection arises from the sometimes “egregious price point.”

Caviar Russe, one of the country’s largest caviar importers, with locations in New York and Miami, doesn’t buy Chinese caviar, sourcing almost exclusively from a single German farm with brood stock from the Caspian Sea, and chef Panchernikov himself is a staunch caviar traditionalist. Even so, the brand is adapting to these informal times with direct-to-consumer sales and a swanky new caviar café serving cocktails and, yes, bar bites below its Madison Avenue restaurant. If you can’t beat ’em…