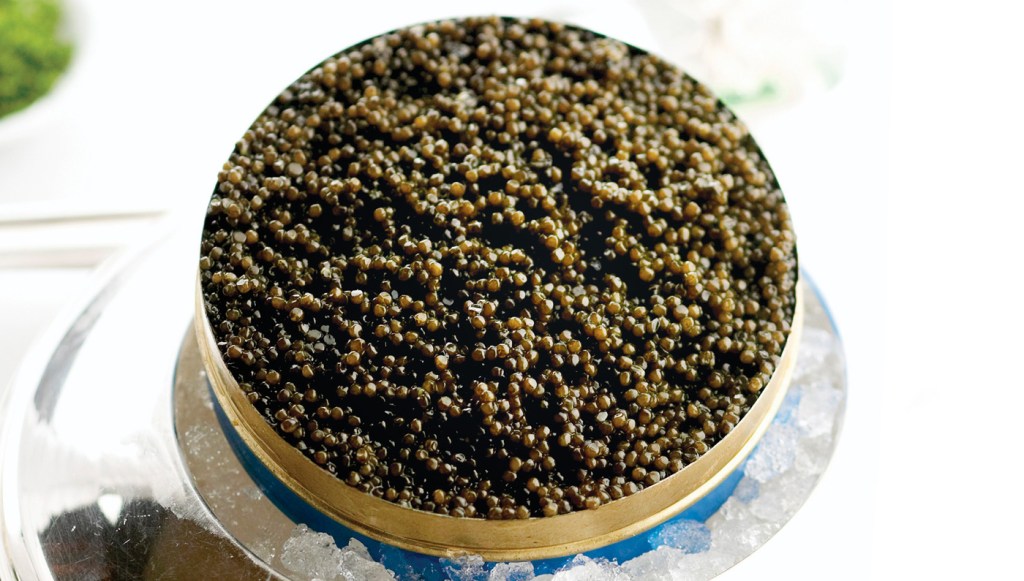 The second-largest freshwater fish, kaluga sturgeon is endangered in the wild but is being successfully farmed in China. Large and glossy grains range in color from dark gray to light golden green. Creamy, buttery, nutty, and mild in flavor. Latin name: Huso dauricus. It is crossbred for the U.S. market, and while it may be labeled as kaluga, it is usually a cross of Huso dauricus and Acipenser schrencki. ($210–$325 per ounce)

Farmed in Europe, Israel, and Asia, this is a favorite of many experts and comes from one of the medium-sized species of sturgeon. It is also known as Russian caviar. True golden osetra is the rarer and most prized variety, produced by an albino fish. Its medium-sized, soft grains range in color from a light brown to a warm, rich brown. It typically has a nutty flavor with marine saline notes and an elegant, well-balanced finish. Latin name: Acipenser gueldenstaedtii. ($150–$395 per ounce)

A smaller variety that is farmed all over the world. Soft, small- to medium-grain black beads—the most similar in appearance to sevruga caviar—have a fresh taste of the sea with a velvety finish. It is less savory and more briny than other kinds. Latin name: Acipenser baerii. ($90–$123 per ounce)

Native to the United States and the third-largest freshwater fish, this species is farmed in California and Idaho, among other states, and is sometimes mislabeled as American osetra. It has a medium-sized, firm bead with lighter tones of warm brown to light green, sometimes even closer to black. Earthy notes, nutty and buttery in flavor. Latin name: Acipenser transmontanus. ($60–$221 per ounce)

Other caviar of note is harvested from sturgeon hybrids, such as A. gueldenstaedtii/A. baerii and H. dauricus/A. schrencki, and marketed under brand-specific names such as platinum caviar or daurenki, depending on the supplier.