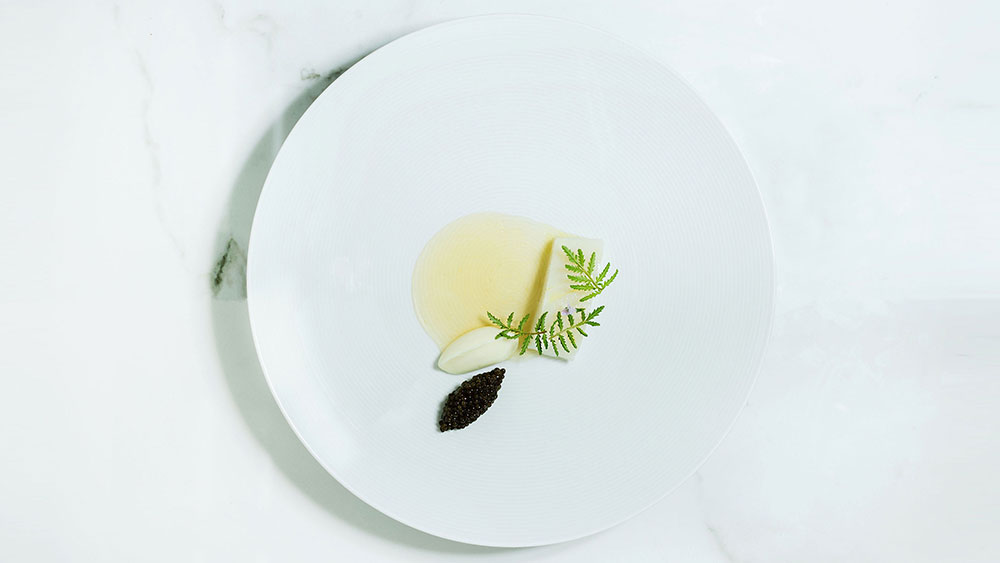 Don’t expect to order ’30’s-era cocktails or absinthe at New York’s newest speakeasy. She’s not that kind of girl. At HŪSO, a diminutive new 12-seat restaurant on the Upper East Side, servers are more likely to bring you a “flight” of ossetra and beluga than a tumbler of bourbon. That’s because this new spot is also the first NYC outpost of famed Florida caviar purveyor Marky’s.

Caviar lovers who proceed to 1067 Madison Ave. (near 81st) will find a selection of domestic and imported caviar, as well as many other gourmet groceries (foie gras, truffles, jamón ibérico) at the retail store. During the day, the HŪSO space will be open to all as a “fine casual caviar bar,” with an a la carte menu that includes caviar flights, a “HŪSO Dog” (Alaskan king crab merus roll topped with Golden Ossetra, pickled mustard and avocado in brioche) and Wagyu tartare with gribiche and Marky’s Russian Royal Ossetra. Then, at night, curtains will be drawn for the “speakeasy,” a $200, seven-course tasting menu, with caviar in nearly every dish (the restaurant gets its name from the Latin genus and species for beluga).

HŪSO’s executive chef is Buddha Lo, an Australian who’s worked at Eleven Madison Park and Gordon Ramsey, as well as at the Melbourne restaurant Mateo’s. Among the promised dishes are an Olivie Potato, which is a hollowed whole potato filled with beluga sturgeon meat, Russian potato salad ingredients (pickles, dill, egg and carrot), served on a layer of caviar, and topped tableside with dill and sour cream sauce. There’s also a fried chicken “oyster” (that tasty bit between the thigh and backbone) with cream cheese, wild garlic sauce and caviar, punnily served inside an oyster shell. Meanwhile, desserts are made with both Russian Imperial Gold Osetra caviar (a honey cake) and chocolate caviar pearls (tiramisu).

Marky’s and HŪSO both pride themselves on being “farm-to-spoon,” with caviar delivered from their own Florida aquafarm within days of harvest. Since 2005, when the U.S. banned beluga imports, the outfit has been especially focused on breeding and repopulating beluga, sevrgua and sterlet sturgeon. The store and restaurant expect to serve a line of domestic purebred beluga caviar by fall (it was originally supposed to be available now, but Hurricane Michael disrupted the process).

The Marky’s retail store is open seven days a week, from 8 am to 10 pm; HŪSO’s dinner service will be Tuesdays through Saturdays from 7 pm to 10 pm, starting April 23. Reservations are required.