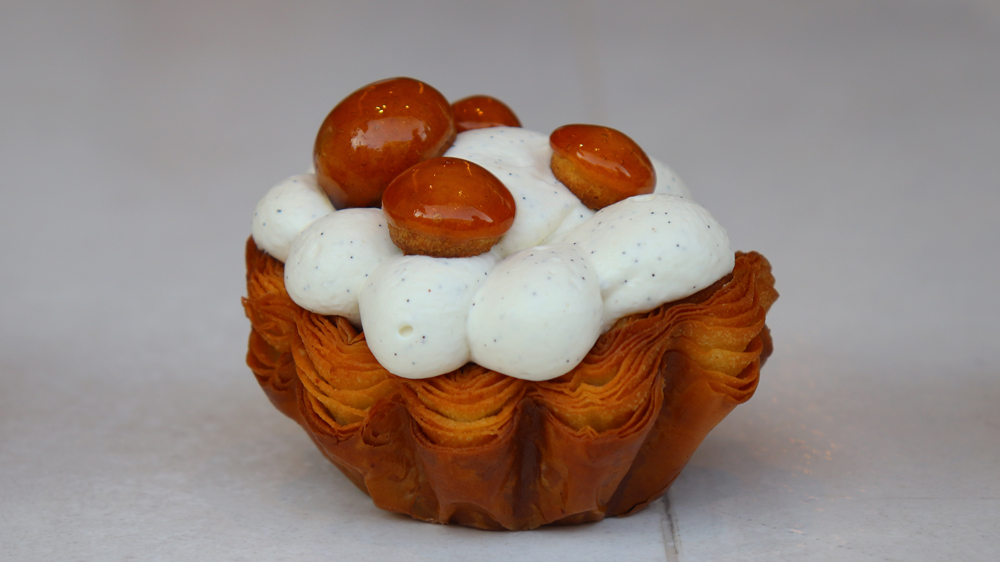 It’s 8:30 a.m. on a wintry morning in Paris, and there’s an unusual amount of commotion happening not far from the historic Palais Garnier in the city center. Around 150 people are standing outside 35 Avenue de l’Opéra in a long line that extends the next block up and wraps around the street corner, attracting the curious looks of passers-by on their Friday walk to work.

It’s only been about 15 minutes since the sunrise has brought the crowd out of the frosty November darkness, into the sun, and one step closer to their collective goal: to be among the first to step foot into arguably the hottest new opening in Paris this winter, pastry shop Cédric Grolet Opéra.

At 8:45 am, Elliott Peltier, 21, is finally at the front of the line after having camped outside the bakery overnight for more than seven and a half hours for the chance to meet his idol, Cédric Grolet, and nab a three euro ($3) croissant—around three times the price of a regular croissant in Paris.

“He’s an icon of contemporary French pastry-making,” says the young aspiring chef while clutching the fold-up chair he had been sitting in since 1 a.m. that morning. “I’ve been following him for years.”

Lines stretched down the block in anticipation.  Photo: Vivian Song

It’s the kind of reception and fan loyalty reserved for rock stars and actors. The anticipation and excitement over a pastry chef and gourmet desserts could be compared to Dominique Ansel, inventor of the Cronut. His hybrid croissant-donut also drew overnight crowds to Ansel’s boutique in New York after it quickly became a sensation in 2013.

And while the two also share the auspicious title of World’s Best Pastry Chef (Grolet received the award from the organizers of the World’s 50 Best Restaurants in 2018; Ansel in 2017), Grolet boasts a healthy lead over Ansel—and many of his pastry chef confrères—as one of the most popular pastry chefs on Instagram, by a large margin.

He currently has 1.4 million Instagram followers to Ansel’s 411,000. Even macaron maestro Pierre Hermé, who has more than 50 boutiques around the world (incidentally, one of which is four stores down from Grolet’s new bakery) has 398,000 followers. The only pastry chef to outrank Grolet is Franco-Swiss chef Amaury Guichon with 2 million followers. But in recent years, Guichon traded in pastry shops to open a new baking academy in Las Vegas and has no boutique of his own.

In France, Grolet gained the attention of the food glitteratti when he was named pastry chef of the year in 2015 by French magazine Le Chef, just three years after joining the luxury Paris hotel Le Meurice. Not long after, his carefully curated Instagram page featuring hyper-realistic trompe l’oeil fruit tarts and Rubik’s Cube cakes would gain the attention of the fickle Instagram audience and flood feeds with images of ludicrously realistic-looking cherries shellacked in glossy perfection; clementines with their dimpled peels; and flowering apple tarts, made with apple slice petals and painstaking precision.

But Cédric Grolet Opéra, the chef’s first independent bakery separate from the hotel, will not serve his signature fruit tarts. Instead, fans who follow him on Instagram know to expect a more modest offering that includes pastries like the Saint Honoré, rum babas, apple tarte tatin, 10-inch éclairs, revisited lemon meringue tarts and sandwiches for lunch.

Because like other chefs, restaurateurs and celebrities before him, Instagram has become Grolet’s main form of PR and communications strategy. As of opening, there is still no website for the bakery; just an Instagram page. Multiple press requests to interview the chef are met with glacial silence, and during a brief conversation, the chef explains he won’t be available during opening week.

The only real sit-down print interview he’s given to promote the shop is to the national newspaper Le Figaro. After all, who needs traditional media when he can leverage one of the most powerful branding platforms and speak directly to his legions of loyal fans?

The man himself.  Photo: Vivian Song

At 34, Grolet is a millennial who understands the Insta-friendly esthetic. The importance of curating an account visually arresting enough to stop index fingers from their incessant swiping. It’s what drew Stanford University student Marie Burnett, studying in Paris for the winter semester, to become a fan and wait in line at 7:30 a.m. on opening day.

“I love his Instagram page, the pastries are beautiful and the page is well-designed. I really like the aesthetic,” she said.

The next morning at 11:20 a.m., another line, albeit a slightly shorter one, has formed outside the bakery under grey skies and a steady drizzle. Passers-by are gawking at the people in line, casting looks of half amusement, half disbelief.

“All this for just a sandwich?” says an older Parisian gentleman in disapproval.

Not just any sandwich. A 14 euro ($15) ham and cheese sandwich—again, around three times the cost of a standard baguette sandwich in Paris—that comes with a selfie with the chef and bragging rights on Instagram.