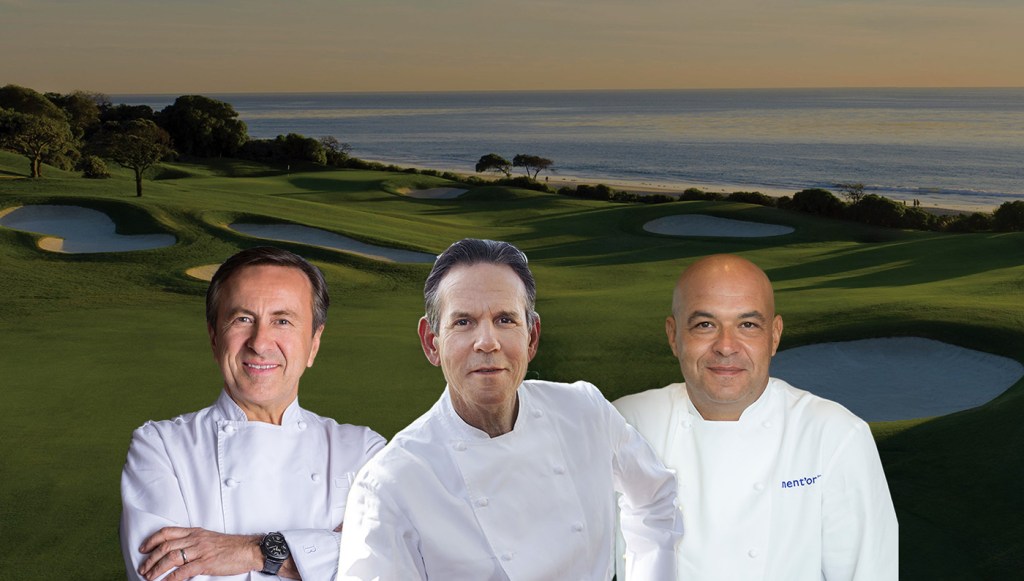 Robb Report’s annual Culinary Masters event brings together the most renowned chefs in the world for a deliciously inspiring and masterfully crafted experience. Up to 12 chefs—headlined by the culinary visionaries Thomas Keller, Daniel Boulud, and Jérôme Bocuse, alongside fellow Michelin-starred chefs and James Beard Foundation Award winners—contribute their culinary expertise to a six-course Gala Dinner at Montage Laguna Beach in Southern California.

The following morning, the chefs and guests gear up for a golf tournament at Monarch Beach Golf Links, a spectacular course designed by Robert Trent Jones, Jr., on the bluffs overlooking the Pacific Ocean in Dana Point. In the evening, the group will commemorate the experience with a celebratory dinner at Montage.

Thomas Keller, who is renowned for his culinary skills and impeccable standards, was first known as the chef and proprietor of the French Laundry, a Napa Valley landmark that opened in 1994 and has been hailed as the finest restaurant in the world. Ten years after opening the French Laundry, he debuted Per Se, which brought his definitive take on fine dining to Manhattan. Today, both restaurants enjoy three-star Michelin ratings, making Keller the first and only American-born chef to hold multiple three-star ratings from the prestigious dining guide. Keller has also opened Bouchon Bistro, Bar Bouchon, Bouchon Bakery, and Ad Hoc, each of which contributes to the new paradigm he has set within the hospitality industry. In 2011, the French government designated Keller as a Chevalier de la Legion d’Honneur in recognition of his lifelong commitment to the traditions of French cuisine and his role in elevating cooking in America. He is only the third American culinary figure to be so honored.

Daniel Boulud, a native of Lyon, France, is one of America’s leading culinary authorities and one of the most revered French chefs in New York City, his home since 1982. Boulud is the chef and owner of 13 restaurants around the world and is best known for his exquisitely refined restaurant Daniel, on Manhattan’s Upper East Side. Outside of New York, the chef’s cooking can be found in London, Singapore, Toronto, Montreal, Miami, Palm Beach, Washington, D.C., and Boston. Boulud is the author of nine cookbooks and the recipient of multiple James Beard Foundation Awards, including Outstanding Chef and Outstanding Restaurateur. He earned the Culinary Institute of America’s Chef of the Year Award in 2011 and the World’s 50 Best Restaurants Lifetime Achievement Award in 2015. Boulud was named a Chevalier de la Legion d’Honneur by the French government in 2006 in recognition of his contributions to the advancement of French culture. He has been a generous supporter and co-president of Citymeals-on-Wheels for more than two decades, and is chairman of the ment’or BKB Foundation.

JérômeBocuse is a native of Lyon, France, and the son of Paul Bocuse, the legendary chef and founder of the Bocuse d’Or international culinary contest. In addition to working with Bocuse d’Or since 1993, Jérôme Bocuse owns and operates Chefs de France and Monsieur Paul restaurants at the France Pavilion at Walt Disney World’s Epcot Center in Orlando, Fla. The restaurants debuted at the opening of Epcot in 1982 and were originally owned and operated by Paul Bocuse, Gaston Lenôtre, and Roger Vergé. In 2008, Daniel Boulud tapped Jérôme Bocuse and Thomas Keller to develop an organization that would create more awareness and support for the United States team competing in the Bocuse d’Or. Boulud, Keller, and Bocuse currently serve as the board of directors for the ment’or BKB Foundation (formerly the Bocuse d’Or USA Foundation). Bocuse is a graduate of the Culinary Institute of America.

The ment’or BKB Foundation is a leading nonprofit organization devoted to inspiring culinary excellence in young professionals and preserving the traditions and quality of cuisine in the United States. Ment’or aims to build a sustainable community of young American professionals who are knowledgeable and confident in their career pursuits and who will become lifelong ambassadors of quality and excellence in the world of gastronomy. The organization is dedicated to making the careers of serious young individuals more meaningful and successful by offering them unique educational opportunities, internships, and access to a Culinary Council of established mentors.

Perched on a coastal bluff high above the Pacific Ocean, the Montage Laguna Beach resort offers 30 acres of seaside luxury at the heart of Southern California’s preeminent artist colony. All guest rooms feature sweeping views of the sea, as well as Craftsman-style architecture and a museum-quality collection of art.

Few golf experiences can match the stunning natural beauty and wide variety of challenges presented at Monarch Beach Golf Links. The master architect Robert Trent Jones, Jr., has fashioned an intriguing layout in the Scottish links tradition on one of the select few oceanfront golf courses in California. With impressive views ranging across dramatic bluffs, this par-70 championship course offers an unending variety of play.

EXCLUSIVE: Raeburn and Aesop Are Collaborating

How Textile Firms Can Back Up Protective Fiber Claims