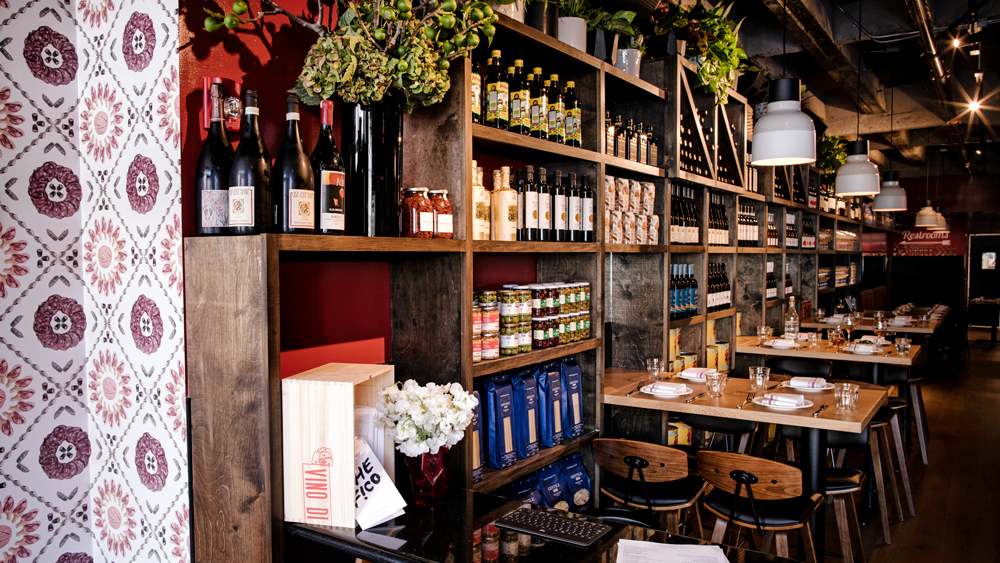 A reservation at Che Fico is still very hard to get. More than a year after the exquisitely designed San Francisco restaurant opened, people still line up outside the door just to get a shot at bar seats. Now there’s another way to experience—or attempt to experience—the Bay Area’s hottest Italian and Italian-influenced cuisine.

On April 30, the Che Fico team of chefs Angela Pinkerton and David Nayfield (both Eleven Madison Park alums) and Matt Brewer (formerly with Chicago’s Hogsalt group, which created Au Cheval) will open their version of a Roman wine bar.

Alimentari is downstairs from Che Fico’s second-floor NOPA space, replacing the more breakfast-focused Theorita, which was open just four months. (The Che Fico team hopes to reopen Theorita at another location, according to Eater SF).

Compared to the flagship’s California accents, Che Fico Alimentari is more traditionally Italian, with such classics as rigatoni amatriciana and bucatini cacio e pepe, as well as calamari, braised short ribs, and melanzana alla parmigiania (eggplant). There’s also champagne, house-baked bread, and many cheeses, including mozzarella di bufala with four different choices of of accompaniment (anchovy, pomodorini, speck or prosciutto), and burrata with either truffle or caviar.

The dinner, wine and dessert menus are already posted on Alimentari’s website; cheese, salumi and Italian pantry items will also be available for retail purchase, along with bread, a selection of Pinkerton’s gelato and desserts, and eventually, bottles of wine for retail sale.

If you want pizza, or some of Che Fico’s more elaborate dishes, you’ll still have to head upstairs. But at least now there’s another place to wait.

Reservations for Alimentari are released on a rolling basis, 14 days in advance at midnight Pacific time. That’s a shorter window than Che Fico’s, which is 30 days. Good luck getting that upstairs Che Fico reservation.