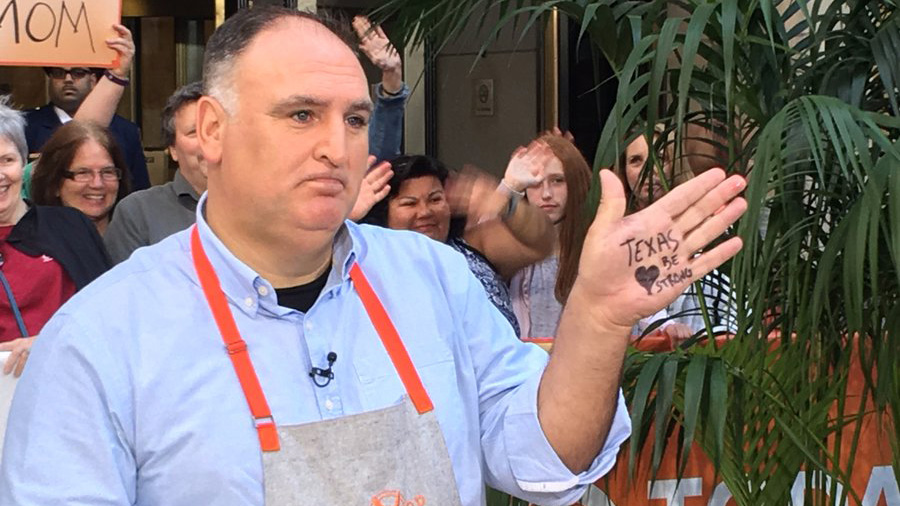 When the devastating earthquake struck Haiti in 2010, chef José Andrés sprang into action to help. In the aftermath of that disaster, he created World Central Kitchen to deal with the immediate problem of Haitians facing hunger. Soon after, he grew the organization to include health, educational, and job programs to provide more sustainable solutions to combat poverty. But even with these larger initiatives, World Central Kitchen still has a mission to respond in times of natural disaster to help those displaced.

So as Andrés saw the devastation unfold from Hurricane Harvey, he flew down to Dallas, Texas, loaded up with food, and drove down to Houston to start cooking for people in shelters.

His trip began with him dropping $1,900 at a Target to buy up as much pasta and sauce as could fit in his rental car. Andrés tried to get to the George R. Brown Convention Center, which has become a makeshift shelter, but water and barricades prevented him access. He was initially at a smaller shelter where around 100 Houstonians are making a temporary home; as conditions improved, he was able to make his way to the convention center to work in the kitchen and accept donations.

Ok! In Houston ready to cook! Thank you @Target your staff rocks! and the great people of @RedCross god bless you! @fema @WCKitchen pic.twitter.com/C5zpLhtkjP

Andrés also made a call out to fellow cooks via World Central Kitchen’s Chef Network, with the message: “We are looking for professional chefs and cooks who can pick up their knife kits and head to Houston immediately to prepare food, serve, clean, to help the many people in need of support through this challenging period.”

Numerous chefs have heeded his call, and now he’s encouraging donations of money and food so that cooks have the supplies they need to prepare meals. Andrés is coordinating with the American Red Cross to have food delivered, and he’s also partnered with Cuisine Solutions, which is sending 40,000 pounds of food to area shelters.

For those who are able to help, Andrés has been pretty responsive on Twitter and is using it to let people know in real time what supplies aid workers have plenty of and what foodstuffs they currently need.