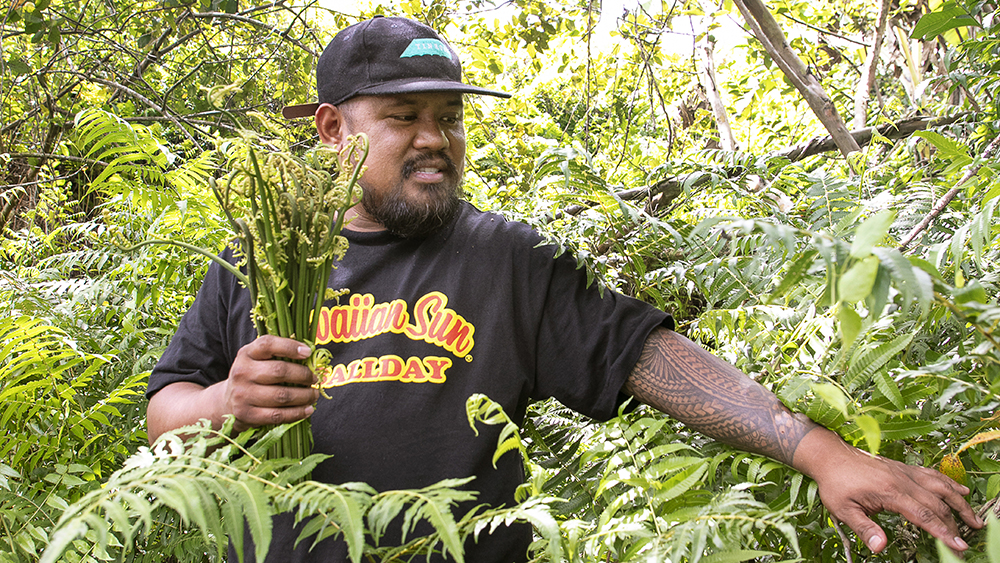 As Sheldon Simeon traversed the continental United States, he couldn’t help but notice his fellow Americans misunderstood Hawaiian food. Simeon had risen to prominence with two stints on Top Chef, during which he explored the cuisine of his native Hawaii, reached the finals and won the fan-favorite votes on both seasons. But, he found, it hadn’t made the impression he hoped for. “I went out to share my food, and people’s idea of the cuisine was that, if you put pineapple on it, then it’s Hawaiian,” he says.

Simeon realized that tourists have long had an outsize role in defining the food and culture of the islands. “We’ve created this industry where Hawaii is an amusement park, one big place that showcases an experience that’s totally different from what [local] families eat when they go home,” says the chef behind the restaurant Tin Roof in Maui.

That spurred him to write his debut book, Cook Real Hawai’i, which showcases a cuisine you won’t find at the resorts or the sriracha-mayo-happy poke shops that have sprouted up across the mainland. It’s a culinary sensibility that’s informed by centuries of immigration and colonization, and that could exist only on these islands.

The original settlers, Polynesians, arrived centuries ago and established foodways that made the islands self-sustaining, cultivating native crops such as taro and harvesting seafood from both streams and the open ocean. The arrival of European explorers, led by Captain James Cook in 1778, interrupted the balance they’d achieved, and business interests would eventually turn the fertile land over to cash crops. “It was all taken up for profit, growing pineapple and sugar instead of food for the people,” Simeon says. “Eventually we had to ship everything in here, which is crazy because a little over 100 years ago Hawaii was fully sustainable.”

The explosion of big business on the islands set off waves of immigrant laborers from China, Japan, the Philippines, Portugal and Korea. These cultures commingled, distinct but harmonious. “We can celebrate each other,” Simeon says. “I’m 100 percent Filipino, yet I celebrate Boys’ and Girls’ Day, which is Japanese, and I celebrate New Year’s in a Chinese tradition. We get to pull from all these cultures, and that’s in the food you find here.”

Workers trying to re-create the food they ate back home had to make do with whatever ingredients they could find; either native options or products imported by other immigrant groups. For example, the Hawaiian version of adobo, the national dish of the Philippines, uses Japanese soy sauce because the Filipino version wasn’t widely available. Likewise, when Filipinos in Hawaii couldn’t find coconut or palm vinegar, they turned to Heinz apple-cider vinegar. Sometimes, entirely new dishes are created, like hekka, a noodle-and-vegetable bowl that Simeon describes as “something between a braise and a stir-fry,” with roots in Japan but made using Chinese cellophane noodles.

For the most part, these were not dishes served to tourists, who mostly ate what they did on the mainland. That began to change a few decades ago when a collection of chefs, including Roy Yamaguchi, Alan Wong and Sam Choy, led the establishment of Hawaii Regional Cuisine, a local cooperation that pushed back on the import of ingredients from the Lower 48 in favor of showcasing the islands’ produce and cultures.

But even those forefathers largely saw Hawaiian food through a European—predominantly French—lens. Then a sea change in cooking happened. In the aughts, chefs around the world, from Magnus Nilsson in Sweden to Virgilio Martinez in Peru, looked to their own backyards for inspiration. Hawaiian chefs like Simeon are now focused on local customs as well, curing meats with native salts, reviving ancient fermentation techniques and exploring underground cooking beyond the whole-hog feast. Simeon’s book codifies such traditions while celebrating Hawaiians’ newfound pride in their cuisine.

“Before, you’d never see breadfruit served at a hotel or restaurant. You’d never see hand-pounded taro—it would always be some French sauce with beautiful mahi-mahi on top of it,” Simeon says. “But now we’re cooking with techniques based out of Hawaii, letting Hawaii be our inspiration.”