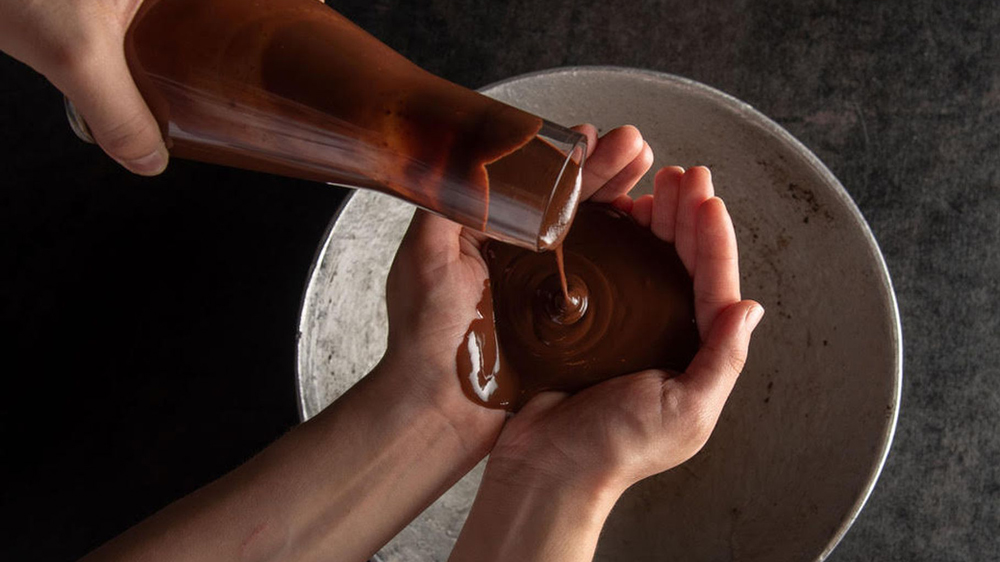 It’s a video that has amused and confused the Internet the last few days. A woman sits flanked by Champagne flutes, hands hovering above a large gray bowl when a waiter approaches with a white pitcher. He’s not not there to finish a plated dish with a sauce. He starts dumping chocolate sauce all over the woman’s upturned palms as she giddily lathers her hands with the confection. The waiter then moves to the gentleman sitting next to her and repeats the process. The duo shove their fingers into their mouths and the nod at each other with cheshire grins. It’s one of the stranger tableside service flourishes you’ll ever see.

On Twitter the video has crested 9 million views and people on the Reddit sub We Want Plates have been left in disbelief. “They already have bowls…just give them spoons,” one commenter pleaded, while another wondered if this was a joke the kitchen was playing on unsuspecting diners. It wasn’t.

The couple—Latin Grammy winner Mariaca Semprún and Venezuelan novelist Leonardo Padrón—were at the Miami location of El Cielo, an immersive tasting menu restaurant from chef Juan Manuel Barrientos that has a Michelin star for its DC outpost, while it’s Bogotá, Colombia, flagship is ranked No. 74 on the Latin America’s Best Restaurants list. The chocolate hand bath is a nightly occurrence on the $197 tasting menu, currently happening after the Blood Sausage Macaron and two courses before the “Tree of Life,” a piece of yucca bread served atop a wire bonsai tree.

Named “Chocotherapy” on the menu, the cacao rinse begins with a little towel to clean your hands, then the chocolate bath followed by water being dumped over your paws into the giant bowl and finished with a napkin to dry off. Its of a piece with the restaurant that aims for an avant garde cooking style rooted in Colombian culture as well as other Latin American cuisines. The course is an ode to chocolate, which was used as a currency in the days before European colonization. And the idea behind washing your hands with chocolate before licking it off is to “awaken the senses” at the beginning of the meal.

What seems more apt is that the Chocotherapy is meant to be a visual stunt ideal for the Instagram era, which is apparent when you search posts made from any of El Cielo’s locations. Diners are regularly showing off their cacao-coated mitts with the same “would ya get a load of this” expression that Semprún and Padrón sported in their video. Well, we’ve got a load of it. That doesn’t mean we want to do it ourselves.