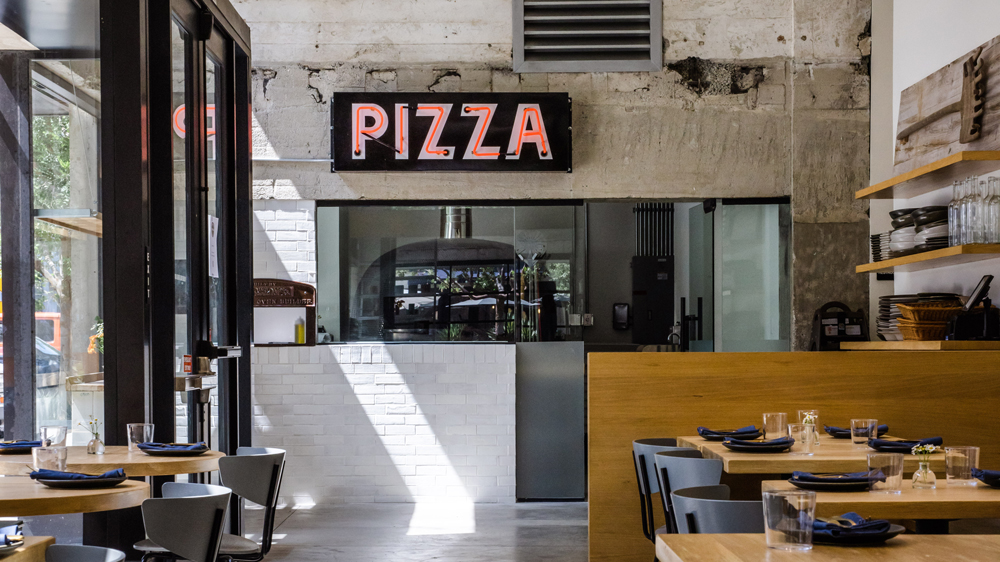 The highly anticipated Los Angeles outpost of Pizzeria Bianco opens for lunch on Thursday with New York-style slices, market salads and sandwiches on house-baked focaccia. Then in July, chef Chris Bianco will start dinner service with the born-in-Phoenix pizzas that turned him into America’s foremost pizzaiolo.

Pizzeria Bianco at the Row DTLA development has electric PizzaMaster deck ovens and, of course, a wood-burning oven. But more than anything else, this restaurant is powered by the passion of a spry 60-year-old man who has nothing to prove and everything to prove at the same time.

“I think at 60 years old, there are a lot of better ways to make money,” Bianco says. “I don’t need to do this, but I need to do it, right? The reasons are all personal, but I have unfinished business. When you swing and miss, it’s just hard.”

Bianco is talking about The Manufactory, the massive Tartine bakery/restaurant/coffee roastery complex that he and Chad Robertson opened at Row DTLA in 2019 and closed after 11 months. At Tartine Bianco, a restaurant inside The Manufactory, Bianco served slices that simultaneously resembled focaccia and Sicilian-style pizza. He called them flatbreads because he wanted to make it clear he was collaborating with Robertson and not making the pizzas that had made him famous.

Then Bianco opened Alameda Supper Club, another restaurant at The Manufactory, and didn’t have anything resembling pizza at all on the menu. He said at the time that his legendary pizzas might show up later, at a different Los Angeles location.

“I only blame myself,” Bianco says. “If you’re a musician, it’s fun to do experimental music. It’s fun to play songs no one has ever heard. But it just wasn’t what this part of the world needed at that particular time.”

So Bianco, who just won the James Beard Award for Outstanding Restaurateur on Monday, is getting ready to shut up and play the hits. In July, the new Pizzeria Bianco will launch a dinner menu built around the six wood-fired Neapolitan-American pizzas that he’s been making for more than three decades in Phoenix.

Three of these 12-inch pies have tomato sauce: a margherita, a marinara and the beloved Sonny Boy with fresh mozzarella, salami and olives. The pizzas without tomato sauce include the iconic Wiseguy with smoked mozzarella, wood-roasted onions and fennel sausage. For the Rosa, a red-onion/rosemary/Parmigiano-Reggiano pizza that Bianco admits wasn’t popular at first, he will use California pistachios instead of the Arizona pistachios he has in Phoenix. For the Biancoverde, an arugula-topped pizza that also took a while to catch on in Phoenix, Bianco is trying out different blends of three or four cheeses. These are his classics, but he still has the freedom and confidence to make tweaks.

“I love my roots, and they’re fucking great, but there are a few branches from those roots,” Bianco says. “I’m definitely about the totality.”

The Margherita and the Rosa.  David Loftus

Opening this restaurant is an emotional experience for Bianco. This is the first restaurant he’s debuting since his father, professional artist Leo Bianco, passed away.

The walls of the new Pizzeria Bianco are decorated with Leo’s paintings, including two that chef Marc Vetri purchased at an Alex’s Lemonade charity auction and recently gifted to the restaurant.

Bianco has been thinking a lot about his own “Forrest Gump fucking life” and the meaningful connections he’s made along the way. One thing he’s learned on this path is that he’s not the kind of man who runs away from failure. Instead, he’s humbly asking Los Angeles to give him another chance.

“I’m not here because LA needs us,” he says. “I’m here because I wanna be a part of what’s here. I hope I can, very respectfully and very softly, broaden what’s already great.”

Bianco knows he’s taking a gamble at Row DTLA again, even though this restaurant (with 40 seats inside and 40 seats outside) is a much more modest undertaking than The Manufactory. He understands that Los Angeles, compared to many other cities, is a hard place to do business. He knows that there are many LA chefs and restaurateurs who are dealing with staffing issues, rising costs, permitting delays and assorted pandemic-related woes. And he realizes that, despite lots of new development, many people still consider downtown LA as a suboptimal location where shininess is often steps away from squalor.

But he’s driven by the belief that the right restaurants, like Row DTLA’s Kato and Hayato, can thrive downtown. And honestly, he feels like he has no other choice but to try again here, with some of the DNA he previously had at Row DTLA. His LA head chef, Marco Angeles, previously baked at The Manufactory. Angeles stresses that Cairnspring Mills flour, which was used at The Manufactory, is a key component of the menu at Pizzeria Bianco.

Beyond having some unfinished business, Bianco is fueled by the energy of downtown LA.

“The reason I came back to the scene of my own crime, or whatever, is I love this place,” he says. “I believe in it. When people talk about downtown LA, they start twisting their head, like, oh fuck, dude, no one goes downtown.”

Hearing talk like this makes Bianco, a high-school dropout who grew up in The Bronx and has always been enamored with big cities, want to be in downtown LA even more.

The restaurant will open for lunch to start and then dinner in July.  Ashley Randall Photography

‘I’ve always been an idiot,” he says. “When I opened up in downtown Phoenix, I heard the same things. But our very cozy little corner was extremely busy. I fell in love with the building. And I thought if I could provide a space for people that would reflect my intention, it would have a chance of working.”

Los Angeles, Bianco admits, is “extremely hard,” but he doesn’t want to overthink things. He just wants to cook.

“Are you hungry at lunch?” he asks. “I’m fucking hungry at lunch. So I’m here. This is one of the great cities in the world. The reason I initially came here is because I was inspired by what was here: agriculturally, the coast, the people, the art scene, tons of culture, this downtown itself. Being here at this time, in the most ridiculous time to do a restaurant, is not easy. But tell me that everybody says I’m fucking crazy and I’m happy to take it in. The long game for a city, and this is me being idealistic, is to show what can be here in spite of everything. Let’s really celebrate what’s amazingly beautiful about this city. And let’s try to work together and just make shit better than we found it.”