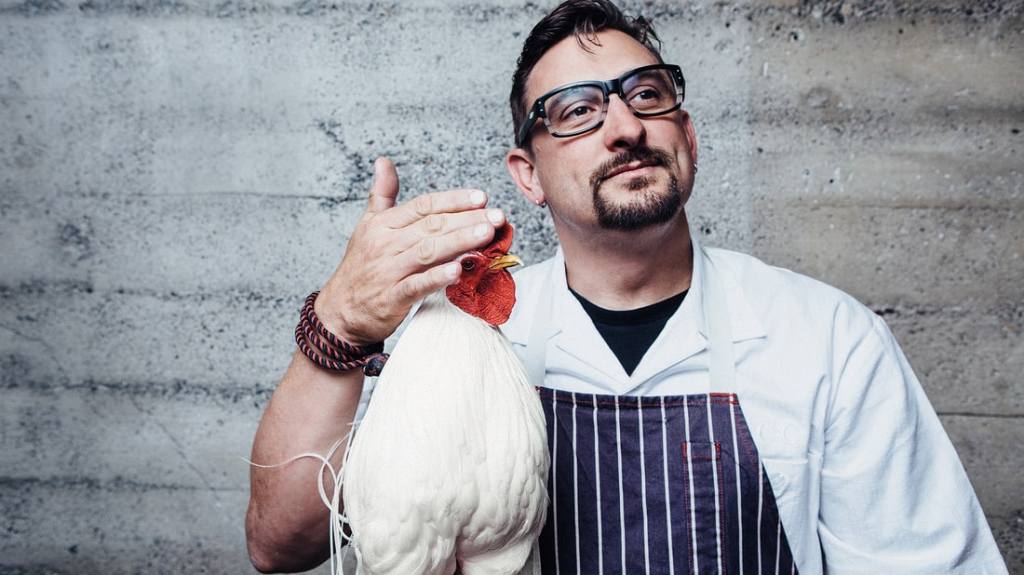 Delicate as lace, chambered as white coral—the cover photograph on Chris Cosentino’s recent cookbook is compellingly beautiful. It is also an ultra-closeup of a piece of tripe, and the book, Offal Good: Cooking from the Heart, with Guts, is the chef’s unflinching opus on the art of preparing off cuts.

Cosentino rose to fame with dishes like spaghetti made with thinly sliced pig’s ears, first cooked at his former restaurant in San Francisco, Incanto. He went on to win a season of Top Chef Masters and influence a generation of cooks to get gutsier with their menus. His book is sure to inspire more: In addition to a staggering range of recipes, it offers detailed instructions on how to prepare everything from duck tongues to cow udders—a compendium that Cosentino says doesn’t exist elsewhere in English.

Over the last three years, he has also opened three new restaurants on the West Coast: Cockscomb in San Francisco, followed last spring by Jackrabbit in Portland and, over the summer, Acacia House at the Las Alcobas resort in Napa Valley. He has won raves for dishes such as the beef heart tartare at Cockscomb and the luxurious schnitzel at Acacia house, ramped up with a thick, juicy slice of Iberico pork, an intense beurre blanc, and a watercress salad with “caviar ranch” dressing. “It’s playful but it’s also delicious,” Cosentino says of his cooking. “If it’s not delicious, playful is just a waste of time.”

Your restaurants are in three of the best food cities in the country. How did you create distinct menus to fit each of them?
At each property, the menu and the style is about time and place. In San Francisco, Cockscomb is 100 percent about the history of San Francisco. When the Gold Rush came, cultures came: Portuguese, French, Spanish, Italian, English, East Coast, Chinese—everybody poured in. Now everyone says they cook Cal-Ital or Cal-French, but that really negates what San Francisco is: We have our own style and that’s what Cockscomb is about. We have dishes that are Portuguese influenced, Spanish influenced, Italian. We have a huge oyster bar. So many dishes were created here that people have forgotten about, like tetrazzini, green goddess, Hangtown Fry, crab Louie, shrimp Louie. We let those things influence us and utilize those flavors.

And at Jackrabbit in Portland, and Acacia House in Napa Valley?
At Jackrabbit, the name is about the indigenous rabbit species in that region of Oregon. These jackrabbits are very unique: they like to come out and eat and play at night and are very convivial, which is what a restaurant is. A lot of the dishes on the menu have a joke, like Around the World in 8 Hams, or the 3 Little Pigs [country ham, “porkcorn” cracklings, and “trottertots” made with rillettes]. One cocktail is called the Coin Toss because that’s how Portland got its name; so we do a coin toss, and it’s either tequila or gin, heads or tails.

At Acacia House, it’s all about wine grapes. If you think about it, there is no California wine grape. All the grapes were brought from Europe: Portugal, Germany, Italy, Spain, and France. So all the food is based on those five countries, and it allows us to fluctuate through different regions of the different countries through the year and the dishes also work well with the wine. We do a crudité of the most beautiful vegetables available. Caviar with chips and dip is fun. Unfortunately, the consistent consensus of what Napa should always be is luxury. But the goal there is to create a convivial feeling. That is the most important thing.

You are so identified with offal and how creatively you use it. How central is it to your menus?
You realize that only 3 percent of my menu is offal? At Cockscomb, I’ll have three or four items on a menu of 45 items. You don’t have to yell at anybody to eat a carrot, but you really have to speak up loudly to have people understand that offal cuts are regular cuts of meat everywhere else in the world. Because I’ve spoken up about it, I’m now the person everyone wants to associate with it. And that’s fine. It’s just that everyone pegged me as a one-trick pony and it’s far from the truth.

We won’t do that, but you have led the way on nose-to-tail eating in this country and now you have a new book about it.
I’m proud of the decisions I’ve made to make offal be a part of everyone’s life every day, because it’s a really important part of the world. When I started cooking 15 years ago, no one would eat these cuts. Everyone would call them poor people food, immigrant food, dog food, garbage. But I’d like to be viewed as a chef who knows how to cook with these things, instead of as a chef who just knows how to cook guts. Thomas Keller and Daniel Boulud cook with these things and no one views them as that.

But Daniel grew up cooking them; it’s part of French history. We didn’t, and it took years for people here to open their minds and realize the bigger implications. If we started using more of these cuts, there would be less factory farming, less shipping meat overseas, less waste. It’s just the right thing to do. It’s called sustainable eating. And it’s also the way our grandparents ate.

I don’t know if grandma ever made chicories with “brainaise.”
It’s the thought process of using what’s there in front of you. Grandmas cook something that someone told you wasn’t edible and make it something delicious. Brainaise is just mayonnaise, or aioli, where you poach pig’s brain and whip it into the aioli. It’s super creamy and it’s served with a roasted pig’s head and a chicory salad. The chicories cut the richness of the pig head and the brainaise is for dipping the crusty skin.

That sounds delicious. So many of your dishes have a surprising twist, like making a dessert out of cockscombs.
Cockscomb is the rooster’s crest, and when you slow-cook them, they become really gelatinous, like a warm gummy bear in your pocket. So the idea was to cook them in a simple syrup made with pomegranate. The texture becomes really beautiful and it takes on a vibrant color. Then we serve it whole with a beautiful, warm rice pudding scented with bay leaf and vanilla, and tart pomegranate seeds.

In the book, you talk about growing up in an Italian-American household in Rhode Island, and how you couldn’t stand it when your grandmother cooked tripe. Was there a moment when that changed
My grandmother from Naples—who I made pasta with growing up—would make sofrit, which was liver, lung, kidney, and heart, and it was delicious and I didn’t know what it was. But the tripe, I couldn’t stand the smell. The changing moment was the first time I went to France, and ate andouillette in Lyon. I realized somebody else can make this delicious.

So why can’t we? Because it wasn’t an option in culinary school to learn how to work with these things and it wasn’t an option where I was working at the time. All throughout France, I ate tripe everywhere. I went to Italy, and it was even more apparent. That was when I dug deep and really started learning. There were no traditional tools, other than Richard Olney’s Time Life series book on variety meats. I was using cookbooks from Japan, Italy, France. All the Japanese books had pictures, but all the French and Italian books were just text and I would have someone translate. I have a cookbook library of 3,500 books, and I might find two or three [offal] dishes per. I was also reaching out, talking to people in the markets abroad, and learning it that way too. It was self-education.

How do you seduce people into eating these cuts for the first time?
I don’t ever try to seduce, never ever. And I never try to mask what’s on the plate. People have to eat it on their own accord and they have to appreciate it for what it is. If someone tries to force something on you, it’s like sitting at the dinner table with your parents forcing you to eat your Brussels sprouts. You’re instantly going to have an aversion to it.

Are there any foods you won’t eat?
There are three things I won’t eat. Natto—it’s fermented soy beans, look it up and you’ll see why. I won’t eat balut—it’s a preformed duck with feathers on it and you eat it in the shell. Pretty gnarly. And I don’t like stinky tofu after a certain age. It gets really astringent and almost stings your palate. But anything else? Seriously, I’ve eaten seahorses on sticks. Scorpions. Beating cobra hearts. It doesn’t bother me. You have to be willing to open your eyes and try things.