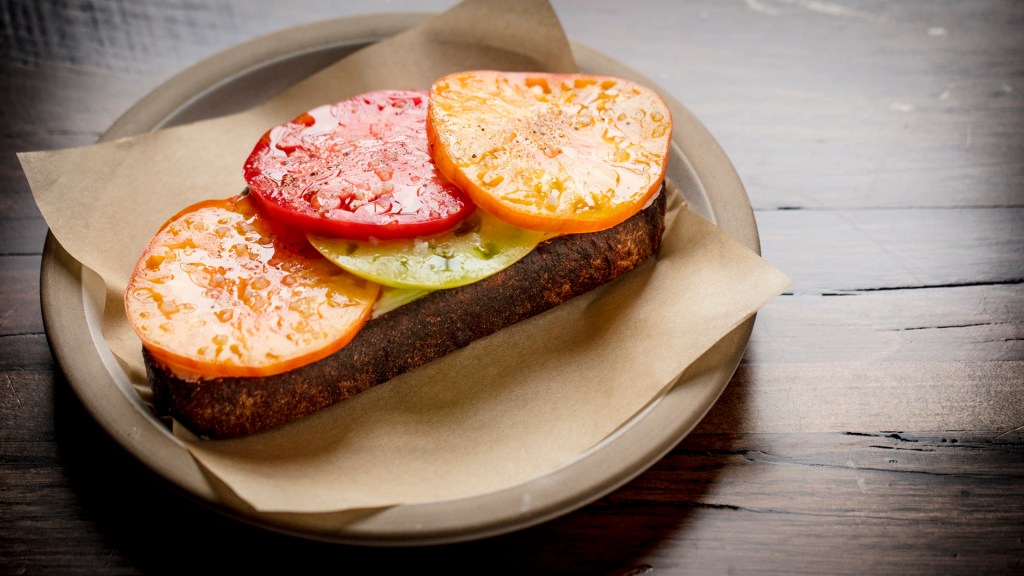 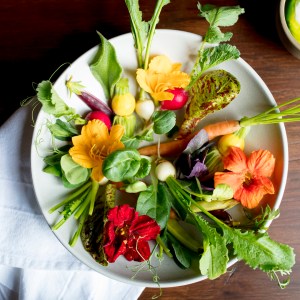 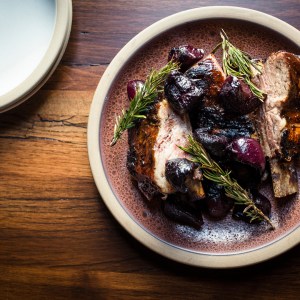 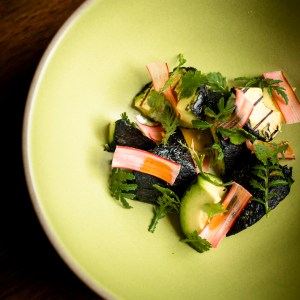 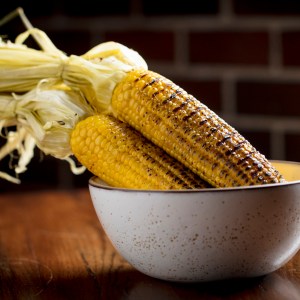 With its charcoal-colored walls, worn wide-plank floors, and ruddy exposed brick, The Charter Oak looks like it’s been a fixture in the Napa Valley for decades. But Christopher Kostow just unveiled his take on a casual wine-country restaurant over the summer, in one of the year’s most anticipated openings. Kostow, of course, is the chef behind the Restaurant at Meadowood, where he earned three Michelin stars for his intensely artistic approach to a locavore menu. At The Charter Oak, which he created in partnership with Nathaniel Dorn, he’s pushing the limits again, this time with a radically simple menu served in a pared-down but breathtaking space anchored by a roaring hearth and a nearly floor-to-ceiling photo of a 1902 train wreck that happened just outside the doors.

Located in the former Tra Vigne—the stately stone landmark that launched Michael Chiarello’s career—the entire space has been rebuilt using wood from a single barn in Ohio. The menu emphasizes the bounty of the valley, particularly the produce from the restaurant’s nearby farm. A bowl of perfect, just-picked vegetables is served with a savory fermented soy dip; a starter of eggs arrive boiled, sliced, and set upon the plate; and cabbage roasted over the coals is dressed with clam stock. Carnivores, never fear: There are also plenty of dishes like a big bone-in short rib smoked over Cabernet barrels and a crisp crusted pork shank roasted with saba and spices. The house wine is drawn from a single barrel blended specifically for the restaurant, using Cabernet Sauvignon, Merlot, and Petit Verdot grapes sourced from Beckstoffer Vineyards, which has some of the most expensive grapes in the valley.

Kostow paused for coffee before Sunday brunch service to talk about being an innovator in a place that puts a premium on history and tradition. Kostow is anything but complacent. “If we don’t do well,” he says, “there’ll be a train wreck on the wall of the restaurant!”

The locals seemed pretty nervous about you taking over the Tra Vigne space. How did that affect you?
It was annoying, because we’re not outsiders. We’ve done work in this community for a long time—very good work. We’re strong advocates of the valley and good citizens. But there’s a fear here that you don’t see a lot elsewhere. It’s a Napa-specific phenomenon. It’s really provincial and annoying.

What is the big fear?
Change. For a lot of people here, change represents moving away from an idealized past. But we’re doing things different because Napa needs different things. I mean, the restaurants in Napa are all fine. But on the casual front, there’s nowhere I want to go. We want to do something different, and when you do that, not everyone’s going to love it. We’re doing service charges. We’re baking all our own bread and charging for it. And people are going, “Oh my god!” Maybe it hasn’t happened in Napa yet, but god, it has happened everywhere else.

There are a lot of subtle differences in the experience.
We wanted to create a more hands-off, less-fussy, less-ceremonial dining experience. So that’s why we have the silverware drawers built into the tables, why the wine service and the water service operates the way it does. We really want it to be like, “Here’s the food; knock yourself out.”

How does the wine service work?
If you bring in Napa wine, we don’t charge you corkage, but we also don’t open the bottle for you. So we bring a box that has a wine opener and some glasses and you’re good. If you’re ordering something off the wine list, which is all Napa and is broken down by regions, we open the bottle and leave it on the table. We do the first step of the wine service and we leave it.

You leave a beautiful Laguiole opener on the table? Do they disappear?
Yeah, they do. And that’s okay.

Offering a strictly Napa Valley wine list, including aged bottles, was a brilliant idea.
No one’s ever done an all-Napa wine list! Isn’t that crazy? A lot of places will say they do, but when you look, there are also Madeiras and Champagnes. That’s the sort of thing we want to do to fully showcase Napa Valley. Napa has a lot of depth, but it can also have a thin veneer. It’s important to break through the veneer a little.

Is that your goal for the restaurant?
We want to create the next legendary Napa Valley restaurant. We want a more elevated experience but not at the price point—at the level of product we source and grow and at a perfect level of service. And in doing so, we want to create a place that becomes a Napa institution. That’s the ambition.

What are the defining elements?

Most everything we serve, we grow. The farm, as the crow flies, is about a half a mile away. Every day we get stuff from the farm for food and for cocktails, too. The fire is on for 20 hours a day. I was here ’til midnight last night, and at 5 am it went on again.

How would you describe the menu?
I want us to do things as simple as possible and to see what extreme we can take that to. We live in a region where the product is second to none, complemented by the way that it grows year-round. So this is what we tell the sous chefs: Imagine you’re having a dinner party. You have a farm at your house. A nice big table. And guests come over and you walk through your garden and you grab some stuff and you cook some dinner. What’s on the table? But it’s hard because to do that well, you have to cook really well.

Is that how you cook at home?
Yeah, I think so. It’s certainly how I want to eat when I go out. I think everyone is doing too much to food. Leave it alone!

It takes a lot of confidence to just slice two boiled eggs in half and serve them with a little salt.
It takes confidence, but it also takes a desire to teach young cooks. No one is teaching kids how to boil an egg perfectly or how to receive product from a farm or how to store and rotate fruit. The eggs come from Taramasso Ranch—Joan Taramasso raises beautiful eggs. We boil them for 6 minutes, and then they’re shocked, peeled, and halved. The cut is really important. You don’t want it yolky like a ramen egg, but you don’t want it yellow. It has to be bright orange. Then you saturate the yolk with olive oil from Hudson—Lee Hudson was sitting at the table in the corner last night—and a bunch of sea salt. The olive oil is produced beautifully. The egg is raised beautifully. And it’s really nice sea salt. What more am I going to do?

How does that compare to your cooking at Meadowood?
Up there, the restaurant is about ceremony; it’s about cleverness and innovation. This is about beautiful products and the idea that this is a celebratory experience. If we’re doing our jobs well, you’ll have the sense that aren’t we all fortunate to be in this beautiful state, in this beautiful part of the world, eating these beautiful things? That’s luxury. That’s luxury more than 2 oz of caviar, because it’s luxury predicated on having people who are good at cooking really good eggs perfectly for you. That’s luxury. When we say it’s casual, and you say it’s more elevated than you thought, perhaps in the end it’s just an egg; it’s just done really well.

How about the avocado that appears to be unpeeled, with a black exterior?
That is probably the most technical thing we’re doing. We marinate the avocado in a pesto-herb marinade, and then we just burn the whole thing over the flames so it looks like the skin is still on there and serve it with rhubarb and mayonnaise and something called ember oil [infused with herbs, chilies, and embers from the fire]. So okay, that dish is pretty cheffy.

There has also been talk of you starting a dining program at Promontory, the new winery in Oakville owned by the Harlan family, who also owns Meadowood and The Charter Oak.
I don’t know if I’ll be doing it, but there’s a lot of potential to move the needle in that setting. For one thing, the food we pair with red wine doesn’t dovetail with how people want to eat now. Short ribs for lunch with a big bottle of Cab? So I want to reinvent food and red-wine pairings using umami, fermentation, and smoke, so you can eat light and healthy with red wine. There are a million projects I’d like to do here.