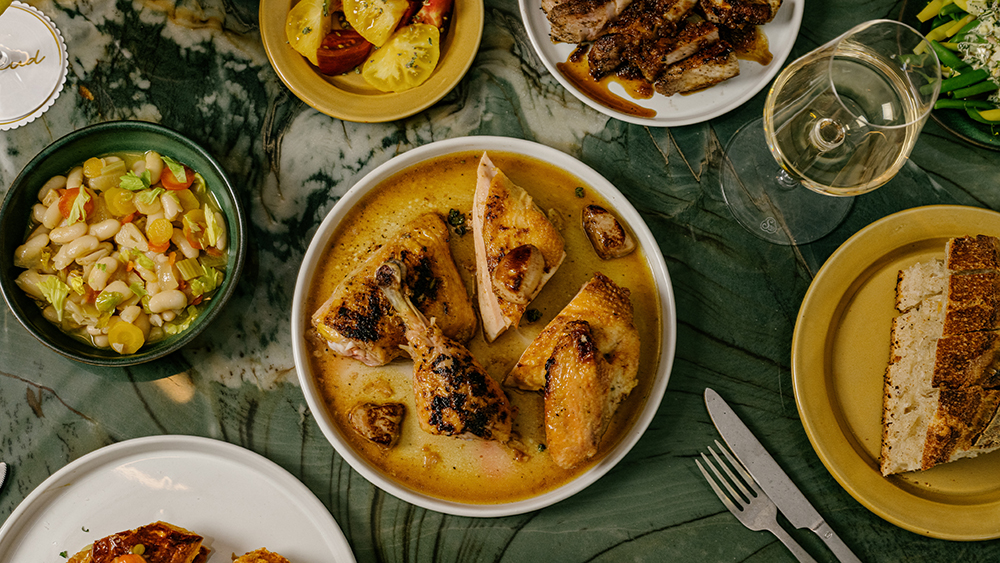 Some fine dining veterans are ready to get a little more casual, as a pair of Momofuku Ko alums are opening a European-inspired restaurant in the East Village on Tuesday.

Claud is the brainchild of chef Joshua Pinsky and wine director Chase Sinzer, who met while working at David Chang’s Michelin two-star tasting-menu spot. Now branching out on their own, they’re hoping to bring the casualness of neighborhood cafés in European capitals such as Paris and London to New York’s downtown scene.

A sampling of the menu  Teddy Wolff

Pinsky is translating that into a menu focused on simple cooking that will complement the wine list. Smaller plates include classic dishes with a twist, such as escargot croquettes and foie terrine with honey vinegar. Moving down the menu, you’ll encounter vegetable-forward plates like barbecue summer squash and cauliflower and sunflower, as well as larger proteins such as a pork rack with smoked onion jus and swordfish au poivre. And the pièce de résistance might well be the aged and roasted duck breast with confit duck legs for two, which is accompanied by maitakes, crudités, crepes and crème fraiche.

As for the drinks, Sinzer has curated a wine list that includes everything from benchmark, classical producers to newer, contemporary ones. More than 1,000 bottles will be kept in the cellar, but only about 200 wines at a time will be presented to diners, allowing for a more approachable offering that encourages conversation when selecting a bottle. The by-the-glass list, meanwhile, is similarly robust, with options spanning both taste and price, from a $13 Viñedos del Jorco, Cebreros Las Cabañuelas 2020 to a $39 Robert Barbichon Blanc de Noirs NV.

And the European influences don’t just stop at the menu. The restaurant’s design drew inspiration from 1950s English pubs, French New Wave architecture and Northern Italian cafés. That last one is most evident in the bar top, which is a beautiful slab of Bramante Maestro made of swirled emerald. Overall, Claud is hoping to be your neighborhood go-to, where you feel comforted by the food, the wine and the space.

“We want you to really feel like you’re just hanging out with us and enjoying the restaurant in a very nothing-to-hide sort of way,” Sinzer told Resy. “It’s a very transparent experience hopefully for everyone.”

Claud will be open Tuesday through Saturday from 5:30 to 9:30 p.m., with hours eventually extending to 10.

Click here to see all the photos of Claud.