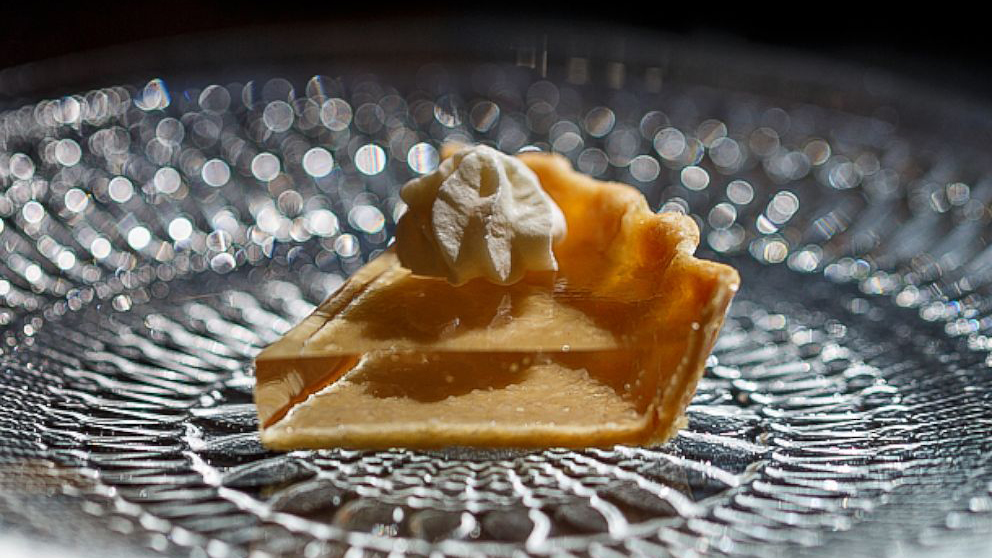 I don’t have any conceivable explanation as to why, but in the 1990s Pepsi decided to take its dark brown cola and make a clear version called Crystal Pepsi. The ad announcing its arrival, featuring “Right Now” by Van Halen, was so ‘90s that it should be sealed in a time capsule and reopened in a century so that future generations know exactly what living in that moment of time was like.

Now, as children of the ‘90s ascend to positions of power and influence in the culture, residue from that decade still coats the present day. For instance, my infant son has a Nirvana onesie. And at Alinea in Chicago, they’ve created crystal clear pumpkin pie.

The three-Michelin-starred temple to molecular gastronomy has taken the classic Thanksgiving dessert and refracted it through their creative lens. Created by executive chef Mike Bagale and chef de cuisine Simon Davies, the bite-sized dessert appears on the fall tasting menu. The crust is a traditional pâte brisée, but the filling is a distillation of the tradition spiced pumpkin custard you eat on Thanksgiving.

“I wasn’t sure how I wanted to serve the distillation, and Simon suggested setting it in a pie crust.” Bagale told Vogue. “What’s cool about the dish is the juxtaposition between modern technique coupled with very classic technique, and when you taste it you get to appreciate the qualities of both.”

To make the pie, they create a traditional filling, mix it with water, then place it in a rotary evaporator. The vapor from the boiling mixture rises to separate from the solids, then is cooled and returns to liquid form. That pumpkin water is mixed with gelatin then set in a crust to create the translucent confection.

If you’re not able to make it to Alinea in Chicago to try it, Vogue has included the recipe in the story, just in case you have a rotary evaporator sitting around.

When you serve it on Thursday, don’t go halfway with your devotion to clear. Be sure to pick up a jar of Crystal Gravy while you’re at it.