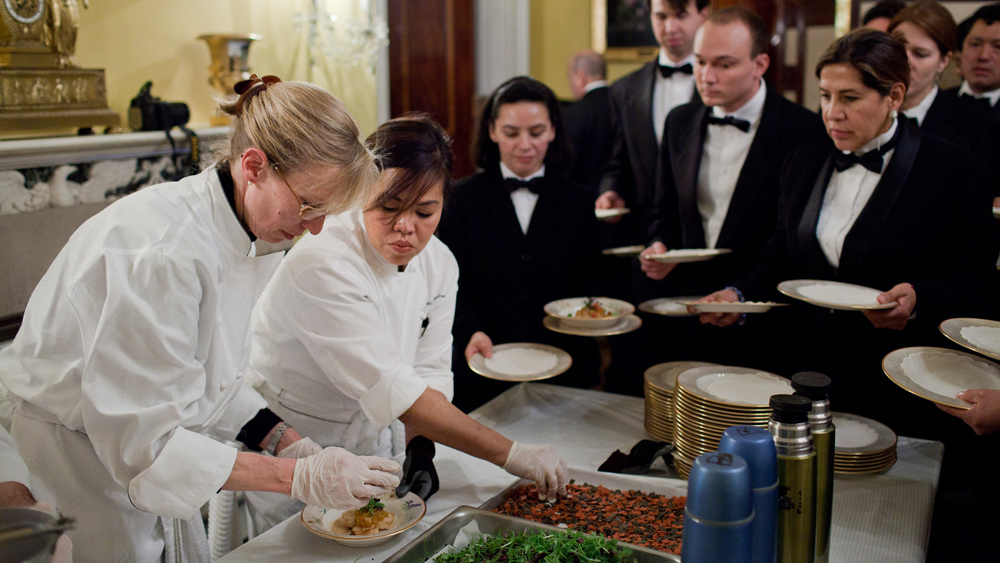 They call themselves the most exclusive gastronomic society in the world.

Because in order to gain membership into the Club des Chefs des Chefs, all candidates must fill one single criteria: They must be a personal chef to a head of state.

In French, the name Club des Chefs des Chefs is a play on words, using the double meaning of the word “chef” which can mean both boss, and kitchen chef. A loose translation would be “the Club of Chefs to Heads of State.” The group is also sometimes referred to as the G20 of the gastronomy world, in a nod to the G7 which was also a French initiative.

Last week, around 20 chefs to the world’s most powerful decision-makers—presidents, prime ministers, chancellors, kings and queens—gathered at the glitzy Hotel Plaza Athénée in Paris to resume a 44-year-old tradition of coming together at a host country every year, which had been thwarted by Covid-19 last year. Chefs from China, South Korea and South Africa were also unable to attend this year due to the pandemic.

“The great benefit of talking with other chefs at these events is we share a lot of similarities and challenges,” said Cristeta Comerford, who has been the executive chef at the White House since 2005.  “For us it’s about conferring and learning from each other. Visiting each other’s countries also helps us understand that particular head of state at the same time.”

It’s also a rare opportunity to meet chefs from around the world who know the most intimate details of the most powerful people in the world, and who carry these secrets close to their chests like classified dossiers: the comfort foods their leaders crave late at night; their food aversions; and any strange or surprising food combination requests.

“Even though we’re all classically trained chefs it’s about the people we serve and the people we’re trying to please,” Comerford said. “It’s all about what they like and their preferences. It’s not about the chef. It’s making sure that everything we do is executed well.”

Predictably, Comerford speaks in generalizations and deftly dodges questions about cooking for different administrations, be it the health-conscious Obamas to Donald Trump, who has an affinity for well-done steaks, KFC and, of course, McDonalds.

But Joseph Korson, chef to the recently ousted Israeli Prime Minister Benjamin Netanyahu, was able to speak more freely about the five years he spent serving the former leader’s family, now that he too has left the prime minister’s official residence.

Unlike Comerford and Mark Flanagan, personal chef to Queen Elizabeth and the Royal Household, who are both public figures, Korson had to keep a much lower profile for security reasons. Only his family and closest friends knew about his job, and he deliberately went dark on social media throughout his residency.

“Israel is a small country and it’s not the kind of place where you want to publicize that you’re close to the PM,” he told Robb Report. “It could be dangerous. So I kept silent about where I worked.”

Korson was a one-man show: along with being the family’s personal chef preparing three meals a day, every day, he served all the meals himself as he had no staff. Compared to chefs for bigger heads of state, Korson describes an unusually intimate, and by consequence, “intense” working environment.

It was a huge departure for the American-born chef who had worked most of his life in the restaurant business, be it running his own place or working for big-name chefs, including Raymond Blanc in the UK. As a personal chef to the Israeli prime minister, Korson’s new role was no longer to show off his creativity or culinary prowess in the kitchen, but to cater to the whims and needs of the most powerful man in the country. And it’s here that he rediscovered a simple but important aspect of being a chef.

With Netanyahu, that meant feeding him foods rich in immune-boosting ingredients like garlic, ginger and lemongrass-infused Thai meals before a busy international itinerary to help keep him healthy on the road; creating meals that came under calorie limits; and starting a weekly tradition of serving the chief of state his favorite meal of chicken schnitzel every Friday at lunch.

Because Korson saw his role as more than just a chef.

“I would tell anyone who wants to work for a head of state, that if you have an ego, get rid of it. Be humble. You can’t go into a place like that with an ego or try to prove yourself or get a name for yourself because ultimately you’re there to serve. You’re serving your head of state, your country and your people. If you have an ideology behind it all, you can weather the storms.”

French chef Guillaume Gomez echoed similar sentiments. After 25 years of working as the executive chef at the Elysée in France, Gomez was a faithful servant to four presidents and their families, who he said were all “attached” to French gastronomy in different ways: some enjoyed generous portions, others lighter fare, and others still were impressed by creative, technique-driven meals.

Earlier this year, Gomez traded in his chef’s coat for a suit and tie, after being appointed an “ambassador of gastronomy” by French president Emmanual Macron, a new position created for Gomez and a first for the country. His official title is “Personal Representative of the President of the French Republic” and his role will be to promote French gastronomy, local products and producers both within France and internationally.

When hosting foreign leaders, Gomez said that certain ingredients were likely to stay off the table: game meats, offal or giblets, for instance, which don’t sit well with many people.

And while kitchens will always receive a list of foods that the foreign leader dislikes or can’t eat as part of protocol, members of the Club des Chefs des Chefs have a secret tool at their disposal for preparing meals their VIP guests will enjoy: a dedicated “blue line” that allows chefs to call one another for intel on their respective leaders’ food preferences, Gomez said.

“This blue line allows me to call up Cristeta at the White House or Mark Flanagan at Buckingham Palace to find out what foods their leaders like.”

It was via the blue line that Gomez consulted with Comerford on one of his last meals for a US president: black pork ribs from Bigorre in the Haute-Pyrénées region of southwest France, and apple pie, Gomez said.

The meal was for Donald Trump.