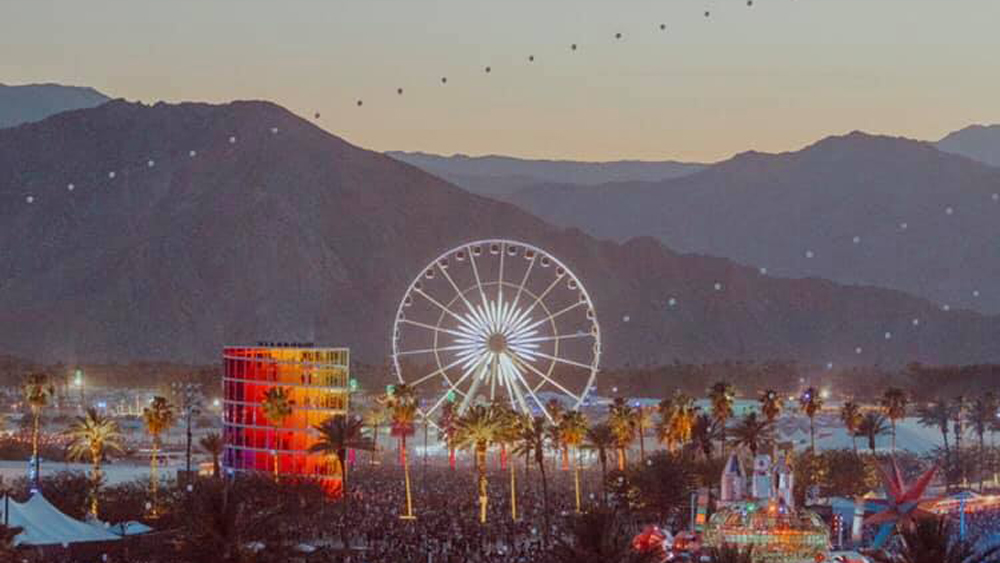 It’s not just bands sojourning to Indio, Calif. to bask in the desert sun as adoring fans flock to them. At Coachella some outstanding chefs—from Curtis Stone to Brooke Williamson to Ray Garcia—leave their restaurants for a couple weekends in April to create food that can match the music at the festival that’s become a cultural touchstone (and occasional punchline). And just as a $999 VIP pass gets you better bathrooms and a better view of Ariana Grande, you’ll also have all-access to a lot of better food. Here’s what to eat and drink as you you’re watching Khalid to Kacey Musgraves.

All-Star Collaboration Dinners
Call it festival-to-table. This sit-down dinner offers a respite from the crowds to enjoy a meal that concludes before the headliners take the stage. The farm-centric, family-style multi-course dining series Outstanding in the Field returns to Coachella with a first weekend line-up that is entirely woman chefs: Shirley Chung (Ms. Chi Cafe) and Casey Thompson on April 12, Nyesha Arrington and Jessica Largey on April 13, and Elisabeth Prueitt, Katie Hagan-Whelchel and Leah Chin-Katz (all from Tartine) on April 14.

These are full-service, four-course meals in the VIP Rose Garden, and you also don’t actually have to have a VIP pass—buying a ticket for the dinner makes you Coachella upper-class for just one day.

Celebrity Chef Pop-Up
Curtis Stone temporarily transports his acclaimed, meat-centric Hollywood hotspot Gwen out east for a full-fledged pop-up (but sorry, no on-site dry age room or butcher shop). He and his brother Luke are offering a prix fixe menu that’s pretty far from your typical festival fare. There are dishes like a grilled little gem salad, smoked brisket with red cabbage slaw, orecchiette with marinated mushrooms and a dark chocolate cremieux. Reservations are available at Open Table, but you will also need a VIP pass just to access the location.

Quick Bites
For those moments where you don’t want to venture away from the music too long, there are plenty of options. Only Coachella VIPs will be able to experience LA-based modern deli Freedman’s high-low pastrami crunch wrap supreme. To enjoy some sushi in the searing heat, head to the hand roll specialists KazuNori, which was created by the same team behind Sugarfish. And LA Chef Chris Oh returns to Southern California with Chingu, his Koreatown-inspired Honolulu restaurant. They’ll be serving fried chicken and spicy ramen.

Drink Up
As the weekend wears on, some high-quality coffee may be required to muster the energy to make it to some of the day’s earlier sets. Acclaimed Venice coffee shop Menotti’s will be on hand to fuel the crowd.

When it’s time to transition to the hard stuff, your best bet will be the Freehand Hotel’s can’t-miss cocktail bar Broken Shaker, which will be on the scene with a full staff of bartenders and fresh ingredients. If you’re in the mood for Tiki—and also want a little speakeasy adventure—you’ll have to work for it. PD Tiki, from New York City’s famed hidden cocktail den, PDT (Please Don’t Tell), will be somewhere amidst the festival’s food and drink area, though it’s a secret for the moment. Judging from past festivals, however, you’ll find it (it will be outside VIP).