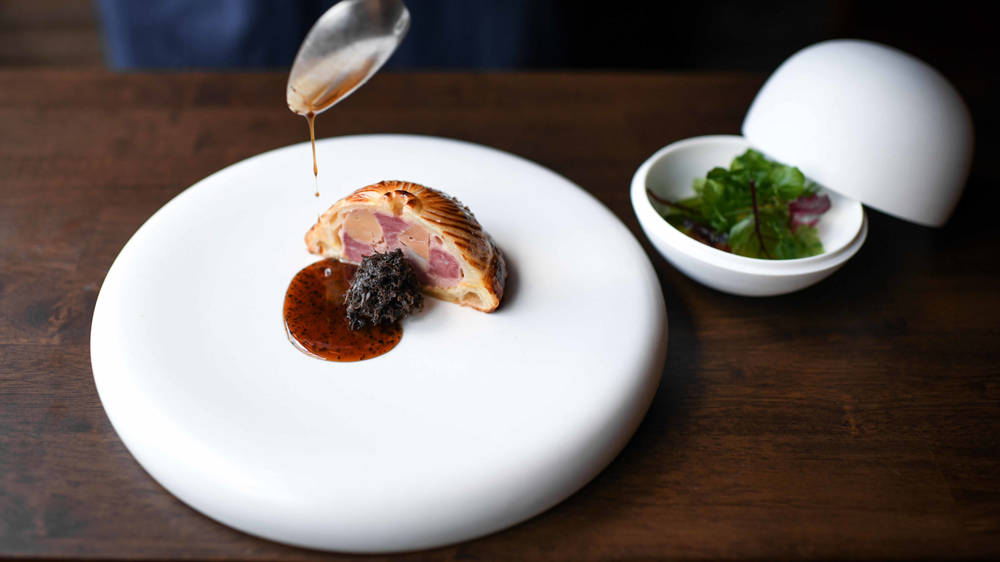 Erik Anderson has put himself in an unenviable position. In the wake of Coi finally earning its third Michelin star a year ago, the restaurant revealed something the outside world hadn’t yet known. The chef behind the achievement, Matthew Kirkley, had quit to compete in the culinary Olympics known as Bocuse d’Or. The San Francisco restaurant needed a new chef, so they turned to Anderson, an award-winning cook in his own right. He would face the daunting task of defending three stars he hadn’t won for the restaurant in the first place.

When Michelin bestows a third star on a restaurant, it’s an exhilarating moment, but one that’s soon replaced with dread. The staff learns the battle to stay at the top may be more fraught than the fight to get there in the first place. From the lofty perch of Michelin’s highest honor, there is only one way to go. It’s why chefs like Sebastien Bras have said they want to return their three stars. And some have even committed suicide when faced with the prospect of losing the third.

There is no easy way to hold on to three stars. Yet, you could say there was a path of least resistance for Anderson to keep them, and that would be to channel Kirkley’s cooking and run back his game plan for a year. That’s not what he did. After taking the job he told Robb Report that he’d built a first menu where “Nothing is the same, everything is different.”

Anderson had the pedigree to back up his move. The Chicago native got his start at Thomas Keller’s French Laundry before heading back to the Midwest to work in Minneapolis. Eventually, he ventured south to Nashville to open the ambitious Catbird Seat. There, 22 diners perched around a U-shaped bar watch the chefs cook their multi-course tasting menu. His time in Nashville earned him rave reviews, numerous accolades, and the respect of his peers. Eventually he went back to Minneapolis to open the more casual ode to classic French, Grand Café, with Jamie Malone. But he still had the fine dining bug, and pursued the opportunity with Coi when it came open.

The subsequent year has been a challenge that he doesn’t shy away from talking about. We sat down with Anderson ahead of Michelin announcing its stars for San Francisco to discuss his time on the job, breaking through a creative block, and dealing with the pressure of running a three-star kitchen.

How has this first year at Coi been for you?
I felt like I hit this creative wall a while back. I was just thinking about stuff and thinking about stuff. I’d do a dish and I’d hate it and I’d throw it out. I started thinking about people for inspiration. I was actually dating this girl at the time, she was super into artichokes, so I thought why don’t I try doing an artichoke dish basing it off of that? And, then I had a friend who was making coffee and I was like, I’m going to do something based on coffee.

It was a weird way to break through that, but I really liked it. I’d say, “All right, I know this person, they’re kind of interesting and they do this.” I would literally build a dish off of them. Inspiration is a weird thing. I’m definitely not one of those people who will tell you, “Well, I was walking outside and I saw a…whatever.” I think that’s just such a bullshit answer. It really is.

When did you hit a creative wall?
Probably right around when I was getting to Coi and Matt had just gotten a third star there, and those are big shoes to fill. I just started being hyper critical or everything, like I’d do a dish and absolutely hate it. I’d do this and I’d hate it.

When you’re younger you have all these ideas, but most of them are garbage because you’re just younger, and the older you get the more you want to edit yourself. You’ve seen a lot more and you’re not going to throw like 90 garnishes on this dish like I did when I was young. It’s just silly.

So, that could be part of it too. The whole process of taking what’s in your mind and reproducing on the plate is difficult. It very rarely works how you want it to, which isn’t a bad thing, but it’s definitely an interesting process. There are things as a cook you’ll focus on and absolutely freak out on and only another cook would understand it, and then half the time the people pick it up and throw it to the side. You obsess about this one little thing and nobody gives a shit about it except you or the person who’s cooking next to you.

But you feel you’ve pushed through that phase?
I really like the menu right now—we’re constantly moving, constantly changing. You just lean on what’s around you, get to know the purveyors better, and get to know the seasons a little better. The biggest shock coming from the Midwest—where six, seven months a year, it’s frozen—and coming out here, you still have strawberries in the fall. Which is nice.

Every menu I try to take a look at some of Daniel’s old dishes, and kind of redo a couple of Coi classics. He has this lamb dish, and my version looks absolutely nothing like what his, but it’s the same basic flavors. I don’t do that for everything, just for one dish on the menu. Coi is an important restaurant that Daniel started, so I think it should still reflect him a little. Not necessarily a lot, just a little. I like having a nod to him on the menu—I don’t know whether he likes it or hates it.

What do you think about Michelin and the stars?
It’s my first time ever really putting my foot in these waters, so I don’t know. It’s definitely a lot more stress. You think about it whether you want to or not. You just do. It’s kind of like that lingering thing in the back of your mind all the time—when I wake up, when I go home. I try not to let it consume too much of my thinking but it’s pretty prevalent. I think about it quite a bit.

What will Michelin do with Coi when the new San Francisco guide comes out?
I’m sure we’ll lose a star, that’s not going to be any big surprise. I think stars belong to the chefs. I have zero, so if I get two, I’d be super excited. Everyone is going to be like, “Oh he lost one.” No, I gained two. Those were Matt’s stars.