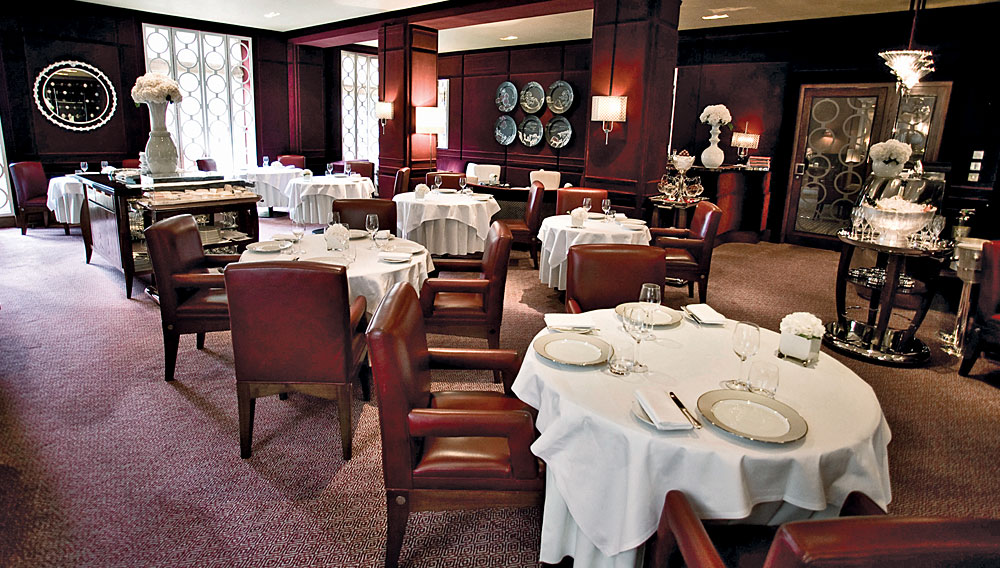 ALAIN DUCASSE AT THE DORCHESTER Michelin three-star French cuisine from the renowned chef in a “contemporary and relaxing” space at The Dorchester. The four-year-old restaurant stands out both “for the food and for the style of the room.” For an elegant and adventurous evening, reserve Table Lumière, an oval table (seats six) situated in the center of the main dining room but shrouded in privacy by a wraparound, luminescent, shimmering fiber-optic curtain. Meals at Lumière feature a surprise menu created by executive chef Jocelyn Herland and served with Hermès china, Puiforcat silverware, and Saint Louis crystal that is exclusive to the table. (AD) +44.20.7629.8866, www.alainducasse-dorchester.com

BAR BOULUD LONDON “Best burgers in London and fantastic charcuterie” at the Mandarin Oriental Hyde Park’s French-inspired bistro and wine bar from acclaimed Manhattan-based chef Daniel Boulud. “Guests bite your arm off to get in” to this happening “hot spot” with “a good vibe.” Lounge in one of the red-leather banquettes and order from a wide selection of Rhône and Burgundy wines. Try the “fantastic” Tunisienne spicy lamb merguez sausage. (CS, MW) +44.20.7201.3899, www.barboulud.com

BENARES “A large, open” Indian restaurant with “unique” dining spaces, this sophisticated spot in Berkeley Square is as popular for its ambience as it is for its aromatic spices and flavors. A private chef’s table (seats six) provides a front-row view of the busy kitchen via a glass wall; in the wine cellar, a sommelier’s table (seats 10) is attended to by head sommelier and wine buyer Costanzo Scala. “Indian cuisine has come along leaps and bounds in the last five to 10 years, but Benares stands out.” (ST) +44.20.7629.8886, www.benaresrestaurant.com

C LONDON The “red-hot” C London outpost of the Cipriani chain is “one of the top tables in town” for its “hustley-bustley” main dining room and “great” Northern Italian cuisine. House-made pastas are a highlight, but “all the dishes are very good.” Formerly Cipriani, the restaurant changed its name in 2010 (at this Mayfair location only) after legal tousles with the unrelated Hotel Cipriani in Venice. (AD, CS) +44.20.7399.0500, www.cipriani.com

CECCONI’S “Just chic enough, but not too crass,” this Italian eatery, centrally located near the main shopping areas of Old Bond and New Bond streets, is “the place to be seen.” Head chef Simone Serafini creates “good, straightforward” Italian cuisine, including cichetti (Italian tapas). If the weather is nice, ask to sit in the “popular outside park.” (MDC, ST) +44.20.7434.1500, www.cecconis.co.uk

THE GREENHOUSE “You can’t go wrong” with this “romantic” charmer on Hay’s Mews. “Fantastic” modern French cuisine and an award-winning wine list with more than 3,000 labels. Executive chef Antonin Bonnet, who trained under French master Michel Bras, invites a small group of guests into his kitchen six times a year for a private cooking demonstration and four-course menu. (AH) +44.20.7499.3331, www.greenhouserestaurant.co.uk

HAKKASAN HANWAY PLACE This basement-level former parking garage is “the most successful restaurant in London in the last 10 years.” Its “exquisite” modern Cantonese cuisine (“the best soft shell crab”) and “very sexy, super-cool crowd” keep this “impossibly glamorous” “oriental wonderland” “packed every night,” despite its being notoriously “difficult to find.” The space is “visually stunning,” a popular draw for “fashion, music, and media” tastemakers (“everyone wears black”), but be forewarned: The acoustics are “quite noisy” and so is the predominantly “younger clientele.” A second Hakkasan, in Mayfair, opened in November. (MB, MDC, AD, AH, GM, MW) +44.20.7927.7000, www.hakkasan.com

HÉLÈNE DARROZE AT THE CONNAUGHT “Very popular” formal French restaurant with cuisine inspired by Hélène Darroze’s native Landes region of southwestern France. Protégé of Alain Ducasse, Darroze has a Michelin-starred flagship on Paris’ Left Bank and now oversees all dining at the Connaught. This namesake eatery at the hotel offers an extensive selection of wines and cheeses, a seasonal truffle menu, and “good people-watching” when you “sit at the window near the front.” (MB, AH) +44.20.3147.7200, www.the-connaught.co.uk

THE IVY “An enduring favorite” with modern British and international cooking, this “most famous” of West End restaurants “doesn’t do any one thing special” but “does the simple things well.” Popular for pre- and post-theater dining, the venerable eatery features stained-glass windows and plenty of “celebrity-spotting.” Private dining on the first floor, complete with a piano player, is available for parties from 25 to 120, and a private members’ club occupies the second, third, and fourth floors. (BM) +44.20.7836.4751, www.the-ivy.co.uk

J. SHEEKEY “Beautiful fish and seafood” at this restaurant on St. Martin’s Court in Covent Garden. West End–adjacent location makes for a “perfect pre- and post-theater” option with its “cozy” main dining room that has a “wonderful, old-fashioned feel.” No reservations? Try the J. Sheekey Oyster Bar next door for more casual dining around an elegant horseshoe-shaped bar. (GM) +44.20.7240.2565, www.j-sheekey.co.uk

KAI Chinese fine dining in Mayfair. What it lacks in ambience, it makes up for with “amazing” cuisine including wasabi prawns, aromatic crispy duck, lamb with Szechuan peppercorns, and lobster essence noodles. Call five days ahead to place an order for what may be “the most expensive starter” in London: Buddha Jumps Over the Wall (approximately $170), a soup of abalone, dried scallops, sea cucumber, ginseng, corn-fed chicken, Chinese mushrooms, and gold. (AH) +44.20.7493. 8988, www.kaimayfair.com

LA PETITE MAISON Cuisine Nicoise at a “beautiful, relaxed restaurant that is really as South-of-France as you get” in London. Located on Brook’s Mews Street, this eatery makes a “chicken dish and a lamb dish you have to pre-order, 24 hours in advance, that is extremely popular.” Mediterranean dishes—thinly sliced octopus in lemon oil, grilled lamb cutlets with aubergine—served with local produce and olive oil procured from the Maritime Alps all add up to “sunshine on a plate.” (MB, ST) +44.20.7495.4774, www.lpmlondon.co.uk

L’ATELIER Joël Robuchon’s London outpost in the Covent Garden theater district features three enticing options. The lower-level L’Atelier brasserie has counter seating “for more casual dining,” while La Cuisine on the first floor provides a “fine-dining” experience and a front-row view of the open kitchen. Start or end an evening at the top-floor Le Bar with Champagne and seasonally flavored macaroons. “Every dish is art on a plate.” (BM) +44.20.7010.8600, www.joel-robuchon.net

MARCUS WAREING AT THE BERKELEY “Very, very fine dining” and an “excellent wine list” from the acclaimed English chef. The decor—deep red leather, dark woods—has a rich, sophisticated feel, more “like a membership club or a gentlemen’s club, not clubby like the modern type of club.” The private chef’s table in the kitchen seats as many as eight. (MB, CS) +44.20.7235.1200, www.the-berkeley.co.uk

NOBU Nobu London, at the Metropolitan London hotel, opened in 1997 as the first European venture for famed chef Nobu Matsuhisa. Go for the understated ambience and traditional Japanese fare with views of Hyde Park. The racier David Collins–designed Nobu Berkeley Street, in Mayfair, opened in 2005 and is where “all the celebrities go,” as much for the “huge” lounge and “knowledgeable bar staff” as for the sushi, hibachi, and wood-oven selections such as duck breast with wasabi salsa and Wagyu rump tataki with dried white miso. (CS) Nobu London, +44.20.7447.4747, www.noburestaurants.com/london; (AD, MDC) Nobu Berkeley Street, +44.20.7290.9222, www.noburestaurants.com/berkeley

RESTAURANT GORDON RAMSAY The notorious chef’s flagship restaurant debuted in 1998 in Chelsea. “Gordon Ramsay has opened many restaurants, but that still remains where his heart is.” It also remains the “envy of everyone in the city. There are very few places on Earth that can touch it.” French-based “state-of-the-art” cuisine and a “superb” wine list make for a “gastronomic experience rather than just dinner”—and a “difficult” reservation to land. Three Michelin stars. (MDC, BM, MW) +44.20.7352.4441, www.gordonramsay.com/royalhospitalroad

THE RITZ RESTAURANT One of the “most asked-about restaurants in London” for its considerable reputation, “elegant” dining room, and “excellent” palace-style cooking. Executive chef John Williams combines traditional British dishes (squab, duck, veal) with fresh, light seasonal ingredients. Live at The Ritz on Friday and Saturday nights features a four-course menu and a live orchestra. “Right now there is no other restaurant in London that offers dinner and dancing.” Jacket and tie required. (MDC) +44.20.7493.8181, www.theritzlondon.com

SCOTT’S A “very trendy” Mayfair mainstay known for London’s “finest” seafood, but also great for seasonal game, meat, and vegetarian dishes. Carefully choreographed seating “properly balances the room,” but it is “very difficult” to get a table. Book well in advance or try to grab a spot at the “elegant” oyster and Champagne bar. For special receptions, the private Art Deco dining room seats 12 to 40. “Good for Anna Wintour and that type of clientele.” (MB, MDC, CS) +44.20.7495.7309, www.scotts-restaurant.com

SIMPSON’S-IN-THE-STRAND This “old-school” British eatery, originally opened as a chess club and coffee house in 1828, claims to have welcomed such patrons as Vincent van Gogh and Charles Dickens. Although the “smallish” restaurant “isn’t what it used to be,” locals like to “go for the roast beef” and the “very traditional English-style bar” that has a “good atmosphere.” (MDC, AD) +44.20.7836.9112, www.simpsonsinthestrand.co.uk

THE SQUARE This 20-year-old French restaurant in Mayfair, helmed by chef/owner Phil Howard, is “consistently at the top” and may just be “the best in the whole of London.” Appeals to “power brokers and gourmands” alike, with a dining room where “every seat is nice” and a wine list that is “like a bible.” Ideal for important business lunches (“You’ll close that deal no matter what”) or more personal pursuits: “In the evening, it becomes quite romantic. Ask for a banquette and sit next to each other to people-watch.” (AH, GM) +44.20.7495.7100, www.squarerestaurant.com

ST. JOHN “Very, very good” British cuisine of the nose-to-tail style at this restaurant and bar located “in the heart of the city,” around the corner from Smithfield Market. Owners Fergus Henderson and Trevor Gulliver took over the former smokehouse in 1994 and divided the meat-packing room into a main room, a private dining area, and a kitchen with a bakery, all of which have been well received: “It’s very difficult to get a table.” (MDC) +44.20. 7251.0848, www.stjohnrestaurant.com

TAMARIND “Tantalizing” Moghul-style Indian cuisine prepared in an authentic tandoor oven and served by an “effortlessly charming” staff. “It’s the gastronomy of Indian [food].” Executive chef Alfred Prasad—the youngest Indian chef to receive a Michelin star, at 29—makes lavish curries and kebabs that “will blow you away.” Many patrons decide it’s “not even worth contemplating the menu” and instead just ask, “Can you choose for me?” (MB, AH) +44.20.7629.3561, www.tamarindrestaurant.com

WILTONS Opened in 1742, this “unashamedly old-school British institution” is notable for its oysters, game, seafood, and “that old-England club feel.” Head chef Andrew Turner’s Dover sole “is the finest in the world,” but he also excels at more obscure dishes such as “seagull eggs, which have a very short season and are difficult to get a hold of.” Meat is carved tableside. “If you’re alone, it’s the kind of place you want—where you can go in and sit at the bar.” (BM, CS, ST) +44.20.7629.9955, www.wiltons.co.uk

THE WOLSELEY This “huge but always lively” brasserie in Picadilly, just opposite The Ritz, is “wonderfully buzzy all day” and ideal for “business breakfasts, lunch, tea, pre-theater dining, and Champagne.” Originally a motorcar showroom in 1921, then a Barclays Bank, the space was taken over by “master” restaurateurs Chris Corbin and Jeremy King in 2003. Redesigned by David Collins, the “very, very grand” café/restaurant is now a perennial favorite. “Americans love The Wolseley . . . because it feels like Grand Central Station. You can go after the theater, and they’re not putting up the tables.” (CS, BM, GM, ST) +44.20.7499.6996, www.thewolseley.com

ZUMA This 9-year-old Knightsbridge hotspot serves “the best sashimi in the world” in a sleek, contemporary-Japanese setting that draws an even sleeker crowd. Surprisingly “friendly service, not snooty at all,” contributes to a “chilled-out” atmosphere that is always “good fun.” Escape the scene in two exclusive-use dining areas set off by wooden partitions. For any table, make reservations “at least four weeks in advance” for a Friday or Saturday night. “When Zuma first opened, if we couldn’t get people into Nobu, we would book them at Zuma. Now that’s flipped.” (MDC, AD, CS, ST, MW) +44.20.7584.1010, www.zumarestaurant.com