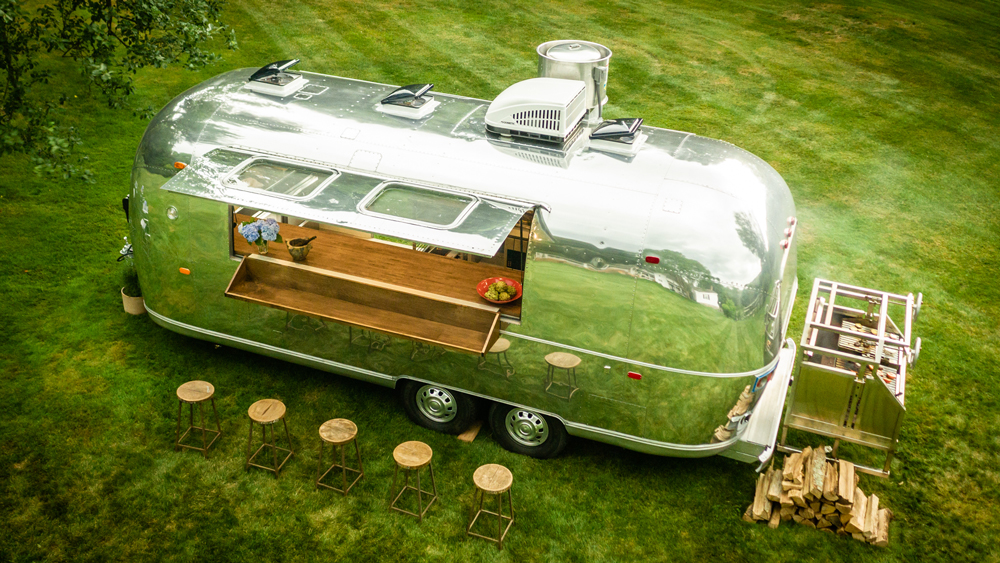 In March, chef Yann Nury’s catering business evaporated overnight. The French-born chef had spent a decade building his American reputation, throwing sophisticated soirees for discerning private clients and big corporate brands like Dior. But when the coronavirus pandemic hit, no one wanted to party anymore.

He spent the first month in denial. It would go back to normal soon, he thought; he just needed to wait it out. By the second month, he realized he needed to start thinking about what comes next.

“It was like, do we do food deliveries? Do we do prepared food?” he said. “But that’s so not us. We didn’t want to reinvent ourselves. We wanted to find a solution that actually matches these times.”

A friend suggested Nury flip burgers on Fifth Avenue, but that wasn’t his style. The food truck concept stuck with him, though, and he reached a solution: Build a rolling kitchen inside a tricked-out 1971 Airstream, drive it around the country and inject some joy back into outdoor entertaining.

“The idea was to create the first really incredible upscale kitchen in an Airstream,” Nury, an architecture buff, said. “[An Airstream is an] incredibly beautiful, shiny object. Everybody recognizes it and loves it. It’s like an old 911 or a Rolex chronograph.”

He drew out his plans by hand, designing it to look like a Parisian galley kitchen, and circulated them to Airstream renovators. Everyone projected the job would take up to a year to complete, but he found a customizer in Ohio—Scott Bowe from Pioneer Vintage Trailer—who promised it done in two months.

“He was so tired of me asking that I think he just surrendered,” Nury said, laughing. “And that’s how it came to life.”

Working in partnership with Dom Perignon and Moët Hennessy, Nury launched the Airstream in mid-July, offering glamorous backyard parties for corporate and private clients in the Hamptons, Philadelphia and Rhode Island, among other East Coast locales. The events have been kept small, in accordance with CDC guidelines, and he and his staff take Covid-19 tests regularly.

“Clients are so excited to have this and to be able to go back to socializing,” he said. “This Airstream is special. Seeing the faces of people when it pulls into a garden is priceless. It creates excitement, helps people to find the joy of doing something again.”

This fall, Nury will embark on a cross-country road trip, first bringing the Airstream back to Ohio where it was born and restored; then going down the California coast, visiting San Francisco, Napa and L.A.; and then hitting Texas, Miami and Aspen, Colo. He may write a book about his travels.

“I’m European obviously, and while I’ve been here for 14 years, a road trip across America is kind of the ultimate dream for all Europeans,” he said.

He wants the Airstream to become a unique part of his catering business for the long term, offering it as a summer and outdoor option. He may even build a second Airstream so that he can have one on each coast. Nevertheless, he is confident the catering business will return to some sort of normalcy—eventually.

“It will and it has to,” he said. “People have been partying and gathering for the totality of life. The Romans, the Egyptians, everybody. Big gathering, feasts were always part of social life. It’s not going to disappear because of a virus.”

There’s a 700-lb. grill attached to the back for live fire cooking.  Photo: courtesy Ben Eisendrath