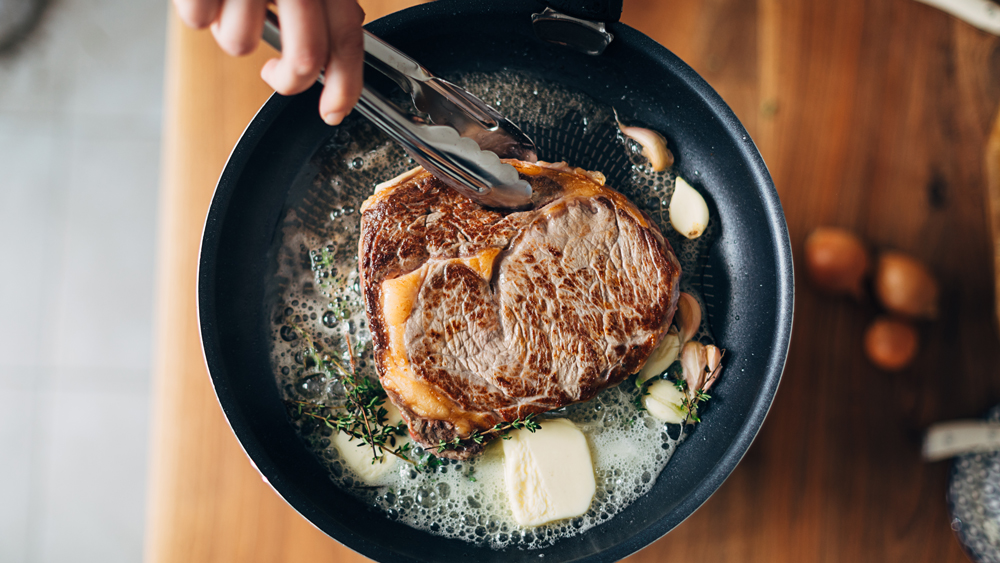 Hilary Henderson misses steak. As chef de cuisine of CUT by Wolfgang Puck in Beverly Hills—one of America’s best steakhouses—she’s used to firing hundreds of chops and filets a night. But the Michelin-starred restaurant has been closed since March due to the pandemic, so Henderson’s been stuck at home, cooking for herself and trying to stay busy.

“I’m doing a lot of watercolor painting,” she said, laughing. “I miss being in the restaurant, in the kitchen—it really becomes a part of who you are. It’s so weird. I have dreams about expediting service!”

While she’s not ready to lead an art class just yet, she does have plenty of steak-cooking advice to give. Robb Report chatted with Henderson about how she cooks the perfect steak at home, from picking out the best piece of meat to slicing it for serving. Here are her top tips and tricks for doing it yourself.

How to Source Your Beef

There’s a reason why steak tastes so much better at a restaurant (besides the skill in the kitchen): Restaurants have relationships with meat purveyors, whether that’s with a particular farm or with the person who is hand-selecting cuts, and they get the highest-quality meat available. CUT has a long-running relationship with Snake River Farms, who Henderson says has “incredible” beef.

You can employ this technique at home by befriending your friendly neighborhood or grocery store butcher. (Of course, if you don’t have a great butcher nearby, great steak purveyors ship nationally) To start the conversation, Henderson recommends asking questions. What’s good that day? What would they buy for themselves? When’s the next shipment coming in?

“I don’t make it about me; find out what they like,” she said. “Because someone who’s in that profession has got to be so passionate about what they’re doing and know so much information. Get to know them.”

Having someone looking out for you at the grocery store is especially helpful today, when shopping can be fraught and browsing the aisles can seem like an unnecessary risk. When Henderson shops, she makes a beeline directly to the meat case (even if she isn’t planning on buying anything) to see if her butcher has anything special. She’s always got her eyes out for grass-fed sirloins with a lot of marbling and a deep red color that’s characteristic of prime beef.

“Learning what you like is probably the most important [element] when it comes to choosing the right cut,” she said. “And then find the best that you can afford. It doesn’t always have to be Wagyu.”

She prefers a New York strip because you can get it cut thick, but it can still resemble a reasonable portion size. Fatty rib-eyes, on the other hand, always tend to be big cuts. She also recommends bone-in cuts, which can be more flavorful and juicier, even without a lot of fat.

“This gets into the cooking method, but super high heat is important. If you still have the bone in your steak, it protects part of the steak,” she said. “Even if you have a little less marbling with the bone in, you’re still maintaining moisture and really able to get that high-heat sear perfect.”

What to Do to Prepare Your Cut

If Henderson is buying a steak, she’s either cooking it that night or the next. She wants it to be fresh. So before cooking, she pulls it out of the refrigerator, brushes it with extra-virgin olive oil and then seasons it with her secret stash of CUT’s signature steak salt.

“It’s running low and I’m starting to panic,” she said.

When she’s out of that, she relies on her tried-and-true seasoning blend: minerally gray sea salt, coarse-ground black pepper, granulated onion and granulated garlic, which she says chars a bit during cooking and is the key to getting a really nice crust on the steak. Then you let it rest.

“The longer you let it sit, it’s going to come up to room temperature, which means it’s going to cook faster,” she said. “If you’re prepping the rest of your meal, pull your steaks out and let them come up to room temp; they’re going to take less time to cook and they’re not going to be the one thing you’re waiting for. I’m very impatient when I’m cooking at home and I just want to get it over with. I’m going to let mine sit for probably 10 minutes at most.”

Henderson prefers cooking a steak on a grill, which gives it a deep, dark char. But when she’s cooking at home, she reaches for either a well-seasoned cast-iron pan or a stainless steel All-Clad pan. She knows she can get those pans really hot, which helps create some char sans grill.

“I want my pan to get as hot as it can,” she said. “I turn the gas on, my pan is on the fire, and I add a little bit of olive oil to the pan at that point. Then once the olive oil starts smoking, literally smoking right before it catches fire … Right before you’re about to burst into flames—make sure you have the hood fans on in your kitchen—I put the steaks in the super-hot pan.”

This causes the temperature of the pan to drop, so it shouldn’t actually catch fire (hopefully).

The Proper Way to Cook Your Steak

Once the steak is in the pan, just let it go. It’s tempting to keep checking it or flipping it, but don’t. This is how it forms its dark char. Henderson observes what’s happening with the rub. Some of that granulated garlic and onion floats off of the steak and into the olive oil and then it starts to burn. And the bottom edges of the steak begin to get darker. That’s when she takes a peek. If the color isn’t even, she’ll adjust the pan on the heat. If it’s ready, she flips it.

Cooking times vary depending on the thickness of the steak and what temperature you want it cooked to. For that perfect medium-rare, let it get a dark char on one side, flip it, let it get a little bit of color on the other side and then pull it off the stove. For a thick, bone-in New York, it will be on the stove for a total of five minutes. Then put the pan into an oven that’s preheated to 425 degrees to 450 degrees. It will remain in there for at most 10 minutes.

Checking the doneness is pretty intuitive to Henderson at this point—she uses the poke-it-and-see-how-much-it-bounces-back method—but for the non-pro cooks at home, she recommends using a cake tester at about the five-minute mark.

“You don’t have to know temperatures; you can insert a cake tester into the center of the steak, pull it out, and rest it on the side of your hand,” she said. “If it’s still cold, then your steak is still blue. If it’s warm, you’re medium-rare going into medium. If it’s hot, it’s probably well-done.”

Baste and Rest Your Steak

Don’t ruin all your hard work by cutting into it right away.  Photo: courtesy Suteren Studio

Once it’s nearly to your liking, pull the pan out of the oven and throw in some cold butter, a smashed piece of garlic and some fresh thyme or rosemary, if you’d like.

“Those add some nice extra flavor, but it just depends on what you have,” she said. “It’ll pop and crackle. So satisfying … Once the butter melts, I baste it a little bit with the melted butter, but I’m not looking to cook it anymore. I’m just giving it that butter love.”

This step should take you less than a minute. Then transfer the steak to a plate for it to rest. Let it chill out for about five minutes. Resting the steak allows the juices to redistribute.

“When it’s cooking, the juices all run right to the center of the meat, which gives you that perfect medium-rare,” she said. “Then when you pull it off the heat and let it sit, it allows the meat a chance to relax and redistribute the juices. If you don’t do that, you cut into it and you’re going to watch your perfect medium-rare steak go to medium right before your eyes. It will change the texture too. It’ll be tough because all the juices just leaked out onto the plate.”

“If you don’t let it rest, all that time you took to select the perfect steak, season it and cook it was totally futile,” she added.

How to Finish and Serve

Henderson sprinkles a bit of fleur de sel or flakey Maldon sea salt on top to give it a bit of crunch, and then serves the steak whole. At the restaurant, they prefer Laguiole steak knives for a perfect slice. Henderson admits to reaching for her favorite chef’s knife to cut her steak at home; it reminds of her being back at work.

“Having an excuse to use my knife always makes me feel good,” she said.