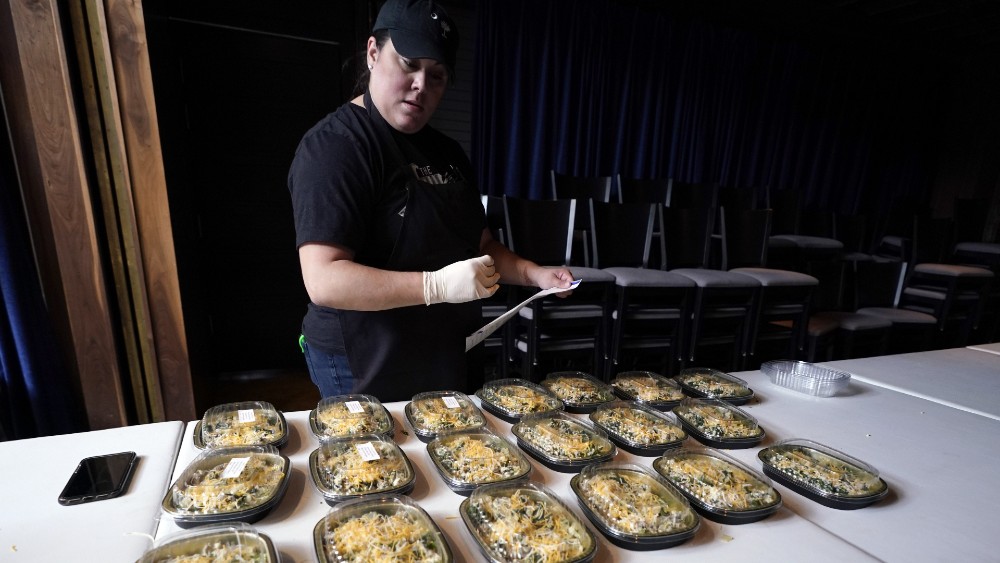 I walk up to the door of the restaurant and see the sign telling me not to come in. I’m there to get my takeout order, so at first, I’m a little confused how this will work. I read further and the sign assures me that someone will eventually come out to help me. I take a few steps back and see a stool sitting on the sidewalk, and another diner approaching me, keeping their distance. After a few minutes of twiddling my thumbs nervously, a woman wearing a mask and gloves emerges from the restaurant. She asks me my name then darts back inside, reappearing with a large bag she sets on the stool so we don’t have to invade each other’s personal space in order to hand off the bag. I’ve already paid online, so the transaction is done. Despite the abundance of caution I still have to wonder: Is it safe to be doing takeout?

It’s not the easiest question to answer, considering that some of the world’s best scientists are still trying to understand the nature of Covid-19 and how it spreads. And restaurateurs themselves have debated whether it’s wise for their businesses to open at all right now, especially after groundbreaking chef Floyd Cardoz’s passing personalized the disease for many in the industry. But the risks of restaurant takeout and delivery are becoming clearer.

“There’s no evidence I’m aware of that there’s a foodborne risk,” says University of Washington professor Scott Meschke. “You don’t get infected by ingestion, but inhalation.” Meschke, a microbiologist studying disease transmission, has transitioned his lab from researching pathogens such as poliovirus and salmonella to focusing on Covid-19. He emphasizes that the virus spreads by droplet transmission, which happens via coughing, talking or sneezing. You may be exposed by contacting a surface with a droplet and then touching your face.

“The dominant way to transmit is likely droplets,” he says. “But the evidence is becoming more compelling for an airborne route, too.”

What does that mean? Researchers at the University of Nebraska Medical Center have discovered evidence of Covid-19 transmitting through breathing, not just droplets from people coughing and sneezing. That research echoes what has been found with a choir in Mount Vernon, Wash., where 45 of 60 people have tested positive for Covid-19 and two died despite observing social-distancing guidelines at their practice in early March.

“It’s pretty impressive in terms of its infectivity,” Meschke says when asked to compare Covid-19 to the flu.

For Tom Colicchio, chef-owner of multiple restaurants, including Craft in New York, this set of facts left him unwilling to do takeout at his establishments. “I thought about it for maybe two minutes,” the Top Chef judge says. “It didn’t make a lot of sense to me, though I’m not casting aspersions on those who have made that decision to do it.”

Restaurants that have remained open have taken measures to minimize contact between staff and diners. Like at LA’s Broken Spanish, where chefs wear masks and gloves and will place food directly in your trunk then close it in order to keep social distance.

It’s those types of measures that lower the risk of contracting Covid-19 from ordering takeout. Because despite how efficiently the virus can spread, it’s not the food part of dining out that is the concern. “You don’t want to have people crowded into small spaces,” says professor Marilyn Roberts, a microbiologist at UW’s Department of Environmental and Health Sciences. “Restaurants were shut down because of crowding patrons, not because of who is doing the cooking.”

If you’re ordering from a restaurant with good sanitation practices and you don’t stand in close proximity to others while picking up your food, your risk for infection is greatly minimized. But that doesn’t mean takeout is completely safe. It’s the restaurant workers themselves who should be worried. “The biggest risk is employee-to-employee transmission,” says Meschke.

You may not get sick because someone with Covid-19 prepares your food, but it’s possible airborne transmission would put all of that person’s coworkers at risk. In a tight kitchen, trying to prepare enough takeout orders to help a restaurant stay afloat, it’s hard for chefs to keep a safe distance from one another.

“I thought it was a dangerous situation,” Colicchio says. “I’m not willing to come to work, then how can I have my team take public transportation and come to work? You are seeing companies force their employees to come to work, and if someone on my team got sick and died, I couldn’t live with that.”

Chefs such as Kyle Connaughton of Michelin three-starred SingleThread in Sonoma have sought to keep diners and workers safe through an almost monk-like devotion to social distancing. Cooks keep separate from one another in the kitchen, food is received from suppliers in a separate room and workers essentially self-isolate, with the restaurant going so far as to shop for cooks’ basic supplies like toilet paper. But those are extraordinary measures that a lot of chefs simply wouldn’t have the room to execute. To try to free up more room, Chris Shepherd, chef-owner of multiple Houston restaurants, has divided the team up into two units, so only a limited number are working at a time. And if it isn’t your turn to work, you can’t go in and out of the restaurant.

Despite all the evidence, I still felt a sense of trepidation. So I asked Roberts, the infectious disease expert, if she was willing order from restaurants herself. She remains undeterred. “I don’t do takeout often, but I did it once last week,” Roberts says. “I’m trying to support independent local restaurants.”