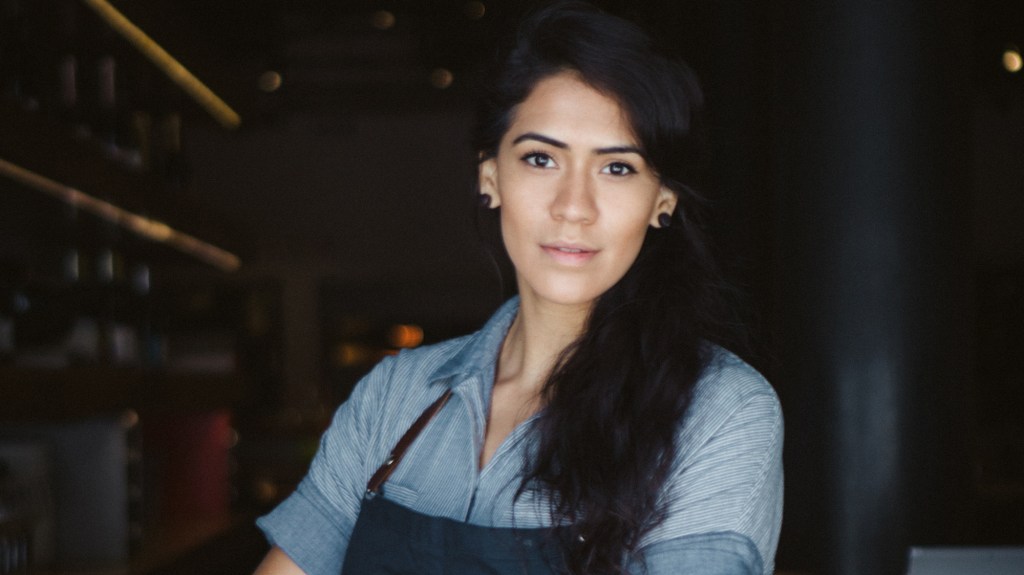 Daniela Soto-Innes has that ability to make you assess how much you’ve accomplished in your life. She’s not actively trying to make you feel bad, but when you stack up what you had accomplished by the time you’re 27 against her resume, it’s hard to not shudder at the comparison. She’s running two New York restaurants—Cosme and Atla—for Mexican master Enrique Olvera; she’s already won a James Beard Award and Cosme is on the World’s 50 Best Restaurants list. But she’s not measuring her career with the accolades others are bestowing upon her.

Starting out in kitchens when she was 14, she’s already logged 13 years in the industry, learning from some of the best (like Olvera and Chris Shepherd in Houston). At Cosme, she and Olvera are serving modern Mexican fare, pushing the cuisine into the fine dining realm, while at Atla it’s one of the city’s hippest all-day cafes, serving classics like chilaquiles and enchiladas.

As she was getting ready for a day of hopping between the two restaurants, we sat down to discuss overcoming burnout, what she thinks of Michelin, and how she and Olvera work together to make their New York restaurants go.

What first got you interested in cooking?
The people. I just like meeting new people; meeting farmers, learning how things grow. And food is something you will never know everything about. Also, I like traveling a lot and the only way you get to really know a place or country is by the food because the food tells you about the culture. And I love to eat. That’s why I keep doing it.

But there was a time in your career when you felt burned out, right?
You have so much stress every day in a restaurant that sometimes you just don’t want to keep doing that to yourself. I’ve always loved my job. I think at that time a few years ago I started getting tired. I was doing a lot of repetition and I was taking things for granted. I was not opening my eyes more. And I’m usually a very positive person. It also happened a little bit when we first opened Cosme. Like, I just wanted to quit. I remember I looked up at Michelin, because the dream of a chef—I don’t think now, anymore—is to have a Michelin Star. And the minute that Michelin got my name on the recommendations wrong, I was just like “Why am I worried about this?” It’s all about a game; a game that you have to play.

Where you start to feel like you’re just checking boxes to get ahead.
Yeah, in order for you to be liked or for you to be on top of a list. But the minute I forgot about that game was the minute that more recognitions came. I didn’t need to try extra hard to be something that I’m not. That’s when I was able, I’m able to do well having to do so much work. But sometimes I’m still like, “This is crazy—I’m running two restaurants at the same time.”

Does Michelin or World’s 50 Best have too narrow of an idea of what a good restaurant is?
I just don’t even worry about Michelin because I don’t know what they want. You know, I see what the qualification of becoming a three-star Michelin restaurant needs to be and I hate tablecloths. I don’t know what a Michelin star takes anymore, so I don’t even try. My biggest interest is for the people that I work with to be happy, because if they’re happy, they make really good food.

As far as 50 Best, it has helped a lot. The minute that we got on the top 50, Cosme was fuller, but we don’t hang a plaque up on the wall. If we get in on the 50 again, I promised the cooks I would put it on the refrigerator. But, we’re not going to put it on the door. Like, why? Because we shouldn’t work just for that. When I did work for that, I got burned out. Because when you work so much where that thing is an achievement, the only person that remembers that achievement is yourself. And you feed your ego. But like, nobody really cares.

I’ve been in restaurants that you work for just to be on top, and it’s so stressful. The work in this kitchen here is stressful, but it’s stressful because, “Don’t screw up the greens, they’re beautiful. Make them nice, man. The farmer was working really hard.” So it’s about that. It’s not about any list. Would it be nice to be on the list this year? Yeah. But, we’re not looking for that at all.

When you and Enrique were creating Atla, what were you hoping to build there?
We wanted to create somewhere to eat every day. Cosme is delicious, but we needed an everyday café. So that’s where Atla started. And it’s been great so far. I think we change the menu more often than we change it at Cosme because it’s so exciting to cook that style of food. Because, sometimes I cook for the cooks, not for myself. The cooks want to learn how to make these things and different techniques. And people that are coming want interesting things too.

But I eat avocados, eggs and some type of fish every day, and coconuts. So, I will open a restaurant with avocado, fish, eggs, and coconuts. And some type of greens. As if I was cooking for myself. And you have to think about the people that are eating in your restaurant. So the people that are eating in Atla, they want healthy food. They want something delicious that takes 10 minutes to eat. And they want to get a cocktail and get out in 45 minutes.

So it’s a distinct experience from Cosme.
Cosme, you can eat the guacamole, and a starter in 45 minutes. And then you’re going to look at the menu, and you’re going to say, “What the hell is this? Green chorizo? Never heard of it. Maybe I’ll try it.” So, there’s the difference. Atla is easy. Atla is something easy, you know what it’s going to look like. You can find it on Google. Like chilaquiles. But Green chorizo, there’s no way, because it doesn’t exist. So, that’s the difference between the two places.

Cosme, you come have dinner and on a special moment, or drinks at the bar and maybe a snack. And Atla you can be there all day long. Because it’s like easy and you can bring your computer or you can have meetings and have something familiar. People are familiar with eggs, avocados, chilaquiles, or a quesadilla. We want to read our crowd and serve them what they want to eat. We want them to be happy.

*An earlier version of this story stated that Cosme has a Michelin star, but it does not. The story has been updated to reflect that.