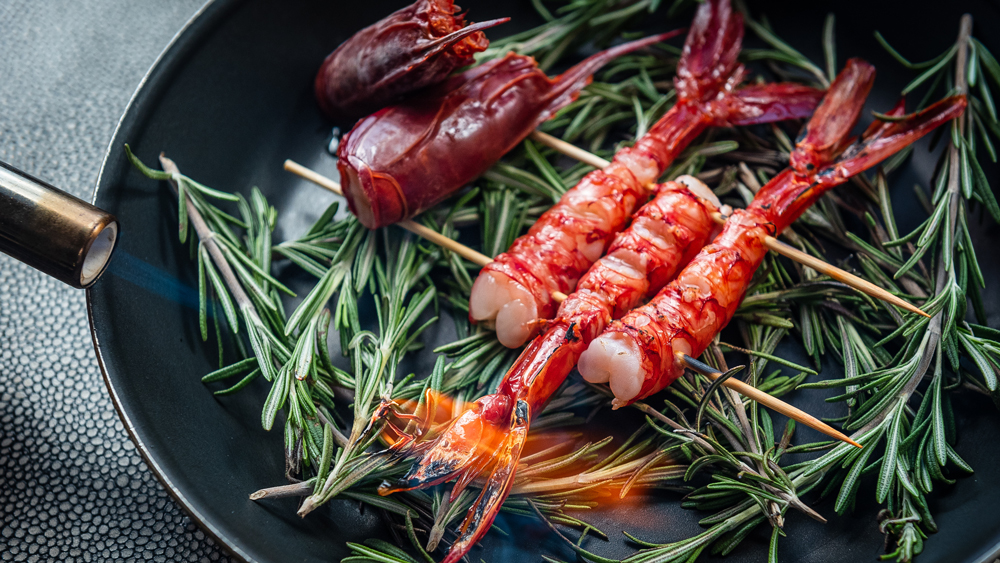 Chef Pepe Moncayo is gushing over Maine uni that he’s never worked with before, which a supplier introduced him to this morning.

“Wow, wow, wow, I want this!” he tells the seafood dealer. He’s been discovering new ingredients like this for the past year, when he moved to the U.S. from Singapore, intent on opening his first restaurant on American soil using American ingredients.

“I’m surprised there are fishermen here that kill the fish Ikejime-style [humanely, through the brain] like they do in Japan, and that they sell products that are very uncommon for non-Japanese cultures like ankimo—monkfish liver—and shirako, which is fish sperm,” he said. “They are super good quality. I was blown away. If I buy this in Japan, it is going to be six times more expensive. Same ingredient, it’s domestic, it’s beautiful and I’m so happy. A dream come true.”

Moncayo, who is originally from Barcelona, Spain, will open his dream restaurant, Cranes, in the Penn Quarter neighborhood of Washington, D.C., on Feb. 8. Cranes will serve Spanish food the Japanese way (kaiseki) and Japanese food the Spanish way (tapas), both incorporating Mid-Atlantic ingredients. (Cranes are migrant birds; Moncayo says he is a migrant chef, traveling the world and sharing cuisines.)

“Spanish kaiseki is a natural combination,” Moncayo said. “Japanese cooking is well-represented in the culinary scene in Singapore, and I fell in love with it the moment I moved there. The more I learned about Japanese cuisine, the more similarities I saw with the cooking I grew up with in Catalonia.”

The chef and co-owner comes to D.C. from Bam!, his omakase restaurant and sake bar in Singapore. He had previously worked under Michelin three-star chef Santi Santamaria in Singapore, among other Michelin-starred Spanish chefs including Javier and Sergio Torres during a decade-long stint in the country.

Built inside a what used to be a Ruth’s Chris Steak House.  Photo: courtesy Cranes

“When you look at the two cuisines, there are so many shared elements, from the cooking techniques to the way we combine ingredients and flavors,” he said. “I embraced a Japanese sense of simplicity, cleanliness and focus on ingredients, but with a Mediterranean approach, and, of course, the other way around as well.”

At Cranes, plates are small and tapas are available à la carte or omakase-style with six seasonal courses. On the opening menu, fresh oysters are topped with ponzu and extra-virgin olive oil. Baby squid are fried and served with soft-boiled egg, chorizo and sake-sherry vinaigrette. Padró peppers are dressed with sesame sauce and bonito flakes.

Desserts include churros with miso caramel and black sesame chocolate, and a pistachio-matcha layer cake.

While in Singapore, he exclusively worked with imported ingredients because, according to him, nothing grows there. This is why he became so enamored with Japanese ingredients. (“It happened organically,” he said. “If I look back, I know why it happened, but I didn’t decide to do it.”) He’s excited to work with comparable versions in the U.S., new things he’s never seen and foraged items that he didn’t have access to before.

Cranes will also have a sake lounge. Moncayo says rice wine’s low acidity and high umami pairs naturally with his dishes’ natural fats and acids. He contrasts it to drinking Champagne while eating jamón or prosciutto: The acidic bubbles rinse your palate and prepare you for the next bite. But when you drink sake, instead of clearing the flavor of the ham out of your mouth, it enhances the taste, heightening the flavors.

The bar will offer diverse and rare bottles of sake such as Kotsuzumi Rojo Hana Ari “Aoi” Junmai Daiginjo and Yamada “Everlasting Roots” Tokubetsu Junmai, as well as cocktails and West Coast and European wines.

The restaurant is 12,000 square feet and seats 250 (it was formerly a Ruth’s Chris). Moncayo says, initially, it will be a herculean task to feed that many people at once, so they are limiting reservations until the kitchen’s execution can be adequately streamlined.

He’s also had difficulties getting through the bureaucratic and legal red tape of opening a restaurant in D.C. In Singapore, he says, he can get an alcohol license in five minutes just by walking into a police station and showing his ID. And he can get a certificate of use, or occupancy, for $500. Here, it has taken months, a lot of money and an entire legal team to get his paperwork in line.

“Food is very important, but it’s just a part of it,” he said. “I am a very lucky man. I have a lot of people behind me, supporting me. This is not a destination—it’s a trip that I’m starting and embracing and God knows where I’m going to end up.”