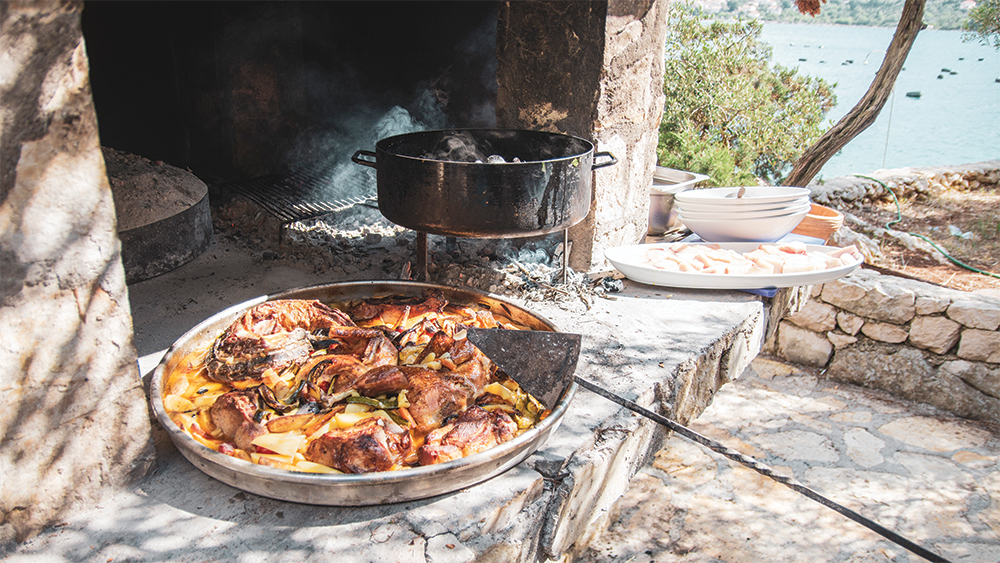 Long a destination for the yacht-and-jet set thanks to its azure Adriatic waters and the historic charm of cities such as Dubrovnik, Split and Zagreb, Croatia has recently seen an uptick in travelers seeking out the country’s vibrant dining scene. And fall is prime season to eat and drink your way across the land, well after the hordes of visitors in search of cheap beach bars and Game of Thrones tours have departed.

The West Virginia–sized nation of just 4 million people has certainly caught the attention of the Michelin Guide, which has awarded stars to seven restaurants, including Restaurant 360, in Dubrovnik, which offers breathtaking views atop the city’s famous walls and a menu that showcases ingredients from across the Dalmatian region. Sea bass is accompanied by pastry purses full of cuttlefish, called fagotini—a nod to crni rižot, the black risotto found all along the coast—while lamb is paired with a cheese custard from the island of Pag, a rocky and mostly barren strip of land that’s nonetheless renowned for its lamb and its sheep’s milk cheese.

A red prawns dish served at the Restaurant 360 in Dubrovnik.  Veronica Arevalo

Noel, in the capital Zagreb, offers two tasting menus featuring contemporary takes on dishes from across the country. An updated version of the traditional brodet fish stew still includes eel and frog’s legs, here sourced from the nearby Neretva River Valley, while a dish of Jadransko More—literally, Adriatic Sea—combines the best of coastal Croatia in a single dish of octopus, shrimp, stonefish and olives. In the town of Korčula on the island of the same name, LD Restaurant, at the Relais & Châteaux property Lešić Dimitri Palace, features a menu inspired by the surrounding waters as well as Korčula’s famous vineyards and olive oils, giving life to the old Croatian proverb that “fish should swim three times: in the sea, in olive oil and in wine.” Adriatic tuna is served sashimi style, while prawn gyoza are topped with mousseline sauce, chilies, daikon radish and sesame.

Oysters and wine on a floating dock, with the shellfish harvested from the surrounding waters.  William Tortillo

Speaking of wine, the local viticulture history dates back more than a thousand years, and a new set of wine hotels are beckoning traveling oenophiles. In the Italian-influenced northern peninsula of Istria, Meneghetti Winery and Roxanich Winery each operate boutique lodgings: The former is built around an old stone farmstead, with suites and villas laid out along lavender-lined gravel paths that lead to the main restaurant, while Roxanich, in the historic mountain village of Motovun, features eclectic, contemporary design alongside traditional wellness amenities—choose between a Turkish hammam or Finnish-style spas—plus a restaurant celebrating Istrian cuisine with ingredients such as homemade pastas and black truffles. Pair your meal with one of Meneghetti’s aromatic, mineral reds, a product of the area’s rocky red soil, or a bottle from Roxanich’s selection of long-aged natural wines, including rosé and orange varietals.

Further south, in Dalmatia, the Pelješac Peninsula is Croatia’s most famous wine-growing area, known for steep mountainsides that spill into the sea. The Plavac Mali grape, a direct relative of Zinfandel, reigns supreme here; grown in limestone soil under the intense Adriatic sun, it produces a spicy, full-bodied red that’s prized throughout the region. Enjoy it during a stay at Korta Katarina Winery, owned by American entrepreneurs Penny and Lee Anderson, which recently opened an elegant eight-key inn housed in a sprawling stone villa with stunning views of the Adriatic Sea—or book a stay directly on the water by chartering the Andersons’ six-cabin, 201-foot megayacht, the M/Y Katharine.

And there are other culinary adventures to be had. Back in Motovun, travelers can start their day truffle hunting with Miro Kotiga, of Miro Tartufi restaurant, followed by lunch, which comes complete with a history lesson on Croatian truffles from his wife, Mirjana. A short drive away, winemaker Marko Fakin offers excellent vintages at his eponymous winery, including examples of the dry local reds made from the Teran grape, which have been produced in the region for centuries, or the floral and acidic Malvazija white. (He also recently invested in giant clay qvevri pots, so lucky visitors may soon have the chance to sample some of his orange wines.) Or for a customizable, small-group experience, try one of the many culinary tours and cooking classes that can be arranged through outfits such as Eat Istria and Dubrovnik’s Captivating Croatia, owned by Croatian-American chef Richard Gruica, which can span anywhere from a few hours to a full week. With the country’s dazzling beauty and wide-ranging culinary traditions born from a diverse array of geographies, from the Istrian peninsula to inland Slavonia and the hills surrounding Zagreb, even the latter option won’t seem like time enough.