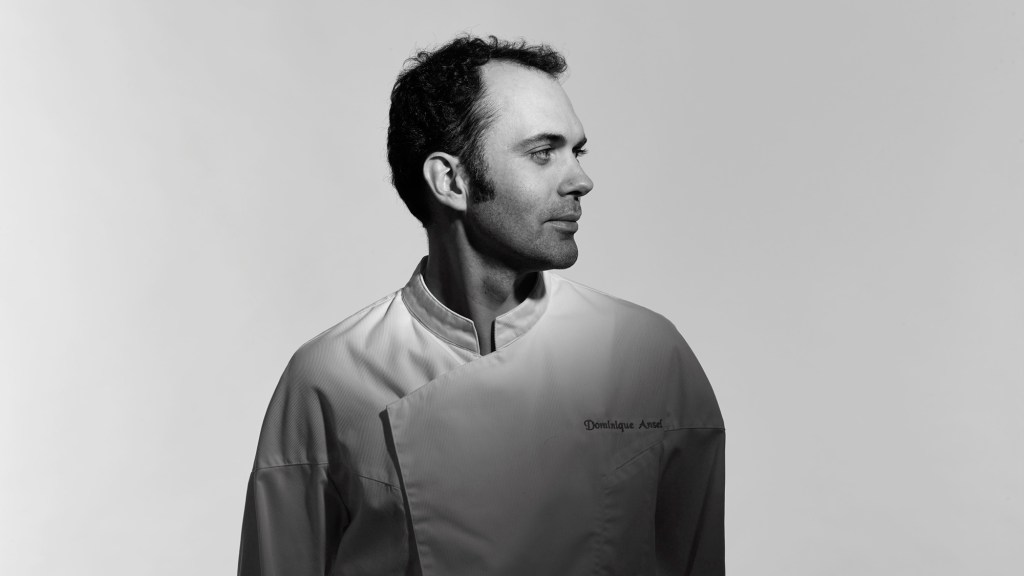 The first sentence of Dominique Ansel’s obituary is probably already written and it includes the phrase, “creator of the Cronut.” It’s not a bad legacy to leave behind. But ever since the French baker’s famed portmanteau pastry went viral five years ago, he set about to make sure the subsequent lines about his professional career in his obit go beyond what he refers to in conversation as “the creation.” And he’s also out to prove that he can cook more than just dessert.

Ansel’s introduction of the doughnut-croissant confection took the world by storm, but his start in food was much less auspicious. There were no idyllic scenes of cooking beside his mother in Beauvais, France, about 50 miles north of Paris. Life in the kitchen came about out of necessity. “My mom was a horrible cook. She’s so bad, like really, really bad. You don’t want to eat her food, and that forced me to be in the kitchen,” Ansel says. “I cooked with my grandmother, doing simple things when I was 12.”

The family just scraped by, living on his father’s factory worker salary. “My dad would work and my mom used to stay home with four kids. The end of the month was difficult. Sometimes we had barely anything to eat,” Ansel said. “I left school at 15 and decided to support the family and get a job. I thought that restaurant work would be easy. I was wrong.”

During his first year in the kitchen, Ansel struggled, cooking mainly for a paycheck under shoddy conditions. “I had a boss who was abusive,” he says. “I was burned with a spatula, insulted, pushed around. A lot of bad things that were totally unacceptable.” But when he began working for a young chef who’d moved north from Paris to open his first restaurant, Ansel’s approach to cooking changed. He learned how to really craft food, and he started enjoying the work.

Soon, in addition to cooking on the line he also tackled pastry. “I loved the precision, the details. It’s a precise science and there’s no shortcut. No cheating. There’s no fast forwarding a step.” Ansel eventually moved over to the sweet side of the kitchen full time, but eventually the obsessive rule-following of working pastry in France made him long for less restrictions and more creativity.

At the age of 28, Ansel moved to New York and began working for fellow Frenchman Daniel Boulud. The change of locale sparked his creativity. “Daniel has a different approach to food, he wanted to see new things all the time,” Ansel says. “This is when I started expressing myself and thinking differently. I was looking a lot at what the chefs on the service side were doing, how they were smoking meat, how they were infusing, marinating things, and it inspired me a lot into working with pastries the same way.” The restaurant underwent a full remodel in 2008 and the team at Daniel was pushing for a third Michelin star, further incentivizing Ansel to get creative with his desserts.

In the 2010 Guide, the third star arrived. By 2011, Ansel was gone. He ventured downtown to open his eponymous bakery in SoHo. The sensation that was to become the Cronut didn’t happen immediately. Inside the small shop, he and his four employees toiled. “Everybody thinks there’s something downstairs, but beyond walk-in fridge and a freezer, there’s nothing,” says Ansel’s partner Amy Ma of the bakery’s tiny kitchen. “So that upstairs kitchen and a small oven is all we had.”

Wanting to explore his creativity further, Ansel started experimenting with laminated dough—dough that’s layered with butter, folded, rolled thin and then repeated to create those telltale flakey layers in a croissant—to see what would happen if he fried it like a doughnut. After around 10 versions, he got the recipe right and in May 2013, he started selling it. The day before it would be available, New York Magazine published a post on the doughnut-croissant hybrid and people started clicking on the story like crazy. People wanted to get a taste of this thing called a Cronut.

Next came huge lines, late night TV appearances, knock-offs happening left and right, celebrities thinking they could cut the line, Cronut trademark needing to be defended—and they had to do this all with that original small space and tiny group of people. “The craziness that happened came by surprise.” Ansel says, “I created the Cronut not with the intention of creating something big. It was another creation to put on the menu, like we’d been doing since we’d opened the shop.”

The success of the Cronut and the attendant fame allowed him to expand to Tokyo and London, but he didn’t want to just travel the world as The Cronut Guy. Looking to be more than a one hit wonder, he sought inspiration in interesting places. “I’m into fingernail art. I look at the patterns, the styles, the effects,” Ansel says. “And I’m fascinated by pottery. I had a pottery class and I loved it.” But his greatest muse may be nostalgia. “We all grew up eating candies, chocolates, birthday cake and it makes it exciting and a lot of emotional connections are made with dessert,” Ansel says. “It’s sugar. It’s the taste of a childhood memory.” Even, it turns out, if the memory isn’t his own.

At SXSW in Austin he debuted a cookie shaped as a shot glass filled with milk. “Cookies and milk is an American tradition. I didn’t know about it, but learned that when I came here,” he says. Same goes for his frozen s’mores—the normally hot treat is instead served cold. He created a dessert on a stick in which ice cream is covered with a chocolate wafer and a marshmallow cream that’s torched to recreate the effect of the campfire. “I’m rarely impressed with what I do, but I took a bite and was like, ‘this is great,’ and I actually finished it,” Ansel says. “I’m a Frenchman that grew up in France, was trained in France, but came to America and learned about something cultural, emotional, and local, then made it into something popular. It’s what I love to do.”

Three years ago, on a rare rainy day in Los Angeles, Ansel and Ma prepared to do a pop-up at The Grove, the luxe mall in the center of the city. With the weather not in their favor, people warned them no one would show up to open-air shopping center. By 2 AM, someone was already in line, driving from nearly 100 miles to be there. By the time they opened at 10 AM, 700 people were queued up and it planted an idea—perhaps they should open in LA.

Meanwhile, back home in New York, Ansel’s ambitions grew. He started hosting events at which he served a dessert tasting menu. “There was a taco shop next to us and everybody ate there after,” Ma says. “When we found that out, we started serving a whole meal. It was nice to provide a beginning-to-end experience.”

“Whether I’m baking or cooking, it’s to have this emotional connection with people,” says Ansel. So he decided that they wouldn’t create just another bakery in LA, but build one with Ansel’s first full-service restaurant there as well. It wasn’t just the fact of opening the full-service restaurant that surprised people, but the kind of restaurant he wanted to create. “Everybody though it was going to be a French, because he’s French,” Ma says. “We come from pretty conservative markets like in Tokyo, where your sushi chef makes sushi, and you’re a ramen guy and that’s all you do.”

But Ansel didn’t follow that path of making classic French, instead, he wanted to draw from his new city. “LA is very eclectic,” he says. “New York’s super eclectic, but people stay in their tradition of what they know, what they cook. I worked in France and Paris for 10 years of my life, where you learn just do one thing, do it perfectly, and not to try anything crazy, which was a very military way of working. LA is like a lot more into being super open-minded, whether it’s the ingredients or the chefs and their background. You don’t have to have one style and stick to it.”

He built the menu at 189—a name inspired by the address of his original SoHo shop—with executive chef Hyun Lee with a mix of influences that include Mexican, Korean, Vietnamese, and French cuisines, as well as those clever touches that define Ansel’s approach to food where he takes the familiar and twists your expectations. Like the octopus corn dog, or “clam chowder” that is actually little neck clam tortellini. Or the chicken dish that draws on the two chefs’ childhoods. “I grew up eating rotisserie chicken in France, and Lee grew up in a Korean family, so we created a rotisserie chicken with Korean influences,” Ansel says. “It’s rubbed with chili, served with black garlic rice and a spicy scallion salad.”

Since opening at The Grove last November, the upstairs restaurant has been serving dinner (and more recently, weekend brunch), while downstairs is an all-day café. To manage, Ansel and Ma bounce between coasts to keep LA and New York operations going, while also tending to the London and Tokyo outposts. Sure, it’s still the Cronut that has lines forming in the bakery downstairs, and getting people in the door. But they’re doing their best to not let that define them.

“I decided to not let that creation kill our creativity, and to keep on moving forward, keep on creating,” Ansel says. “Will a singer always sing the same song? Of course, they won’t. The Cronut is not everything I do and it’s not everything I have.”