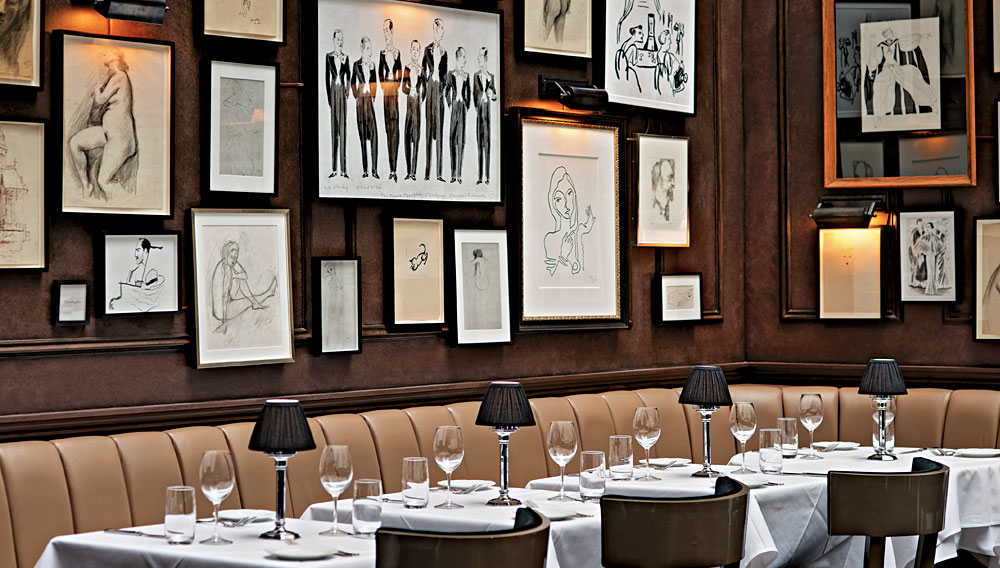 Every neighborhood in New York has its inimitable flavor, as John DeLucie learned growing up in Brooklyn. Places—buildings and their surroundings—have influenced the restaurateur’s cuisine since 2006, when he and a group of partners reopened the Waverley Inn in the West Village. DeLucie put his personal spin on the American classics that, beginning in the 1920s, were once served there—a feat he repeated in Greenwich Village at the Lion, where the nostalgia has a subtle Italian accent. Not surprisingly, his latest endeavor, Crown, also takes culinary cues from its setting: a Gilded Age townhouse on the Upper East Side.

Diners enter Crown through the bar, a narrow corridor with gray velvet walls inspired by the lounge car of the Orient Express. The intimate dining room’s Tudor-style wood paneling, arched limestone fireplace, leather banquettes, and profusion of paintings and drawings suggest a London dinner club from a bygone era, while the adjoining atrium, with its glass ceiling and wall, recalls an expatriate artist’s Parisian atelier.

Old-world and old New York elements also meet on DeLucie’s menus, which are sophisticated and playful but never precious. Whether one selects a tender loup de mer with artichokes and olives or simply a dry-aged Delmonico steak with bone marrow and béarnaise sauce, one always feels very much at home—thanks to the restaurant’s staff and residential address. Crown, 646.559.4880, www.crown81.com