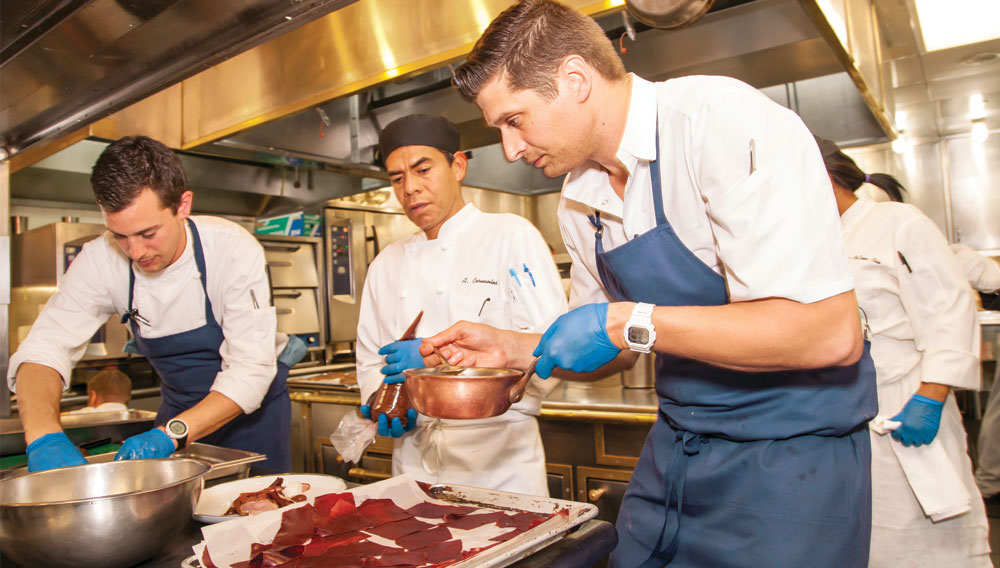 The Event: Delaroque “loves vegetables,” as master chef Nancy Oakes noted, and his first course—carrots with chicory powder and a puree of parsnips and white chocolate—certainly proved it. As did his take on corn pudding, so luxuriously smooth and rich that a whisk left a trail on its surface as though it were soft whipped cream. Delaroque deftly transformed this hearty classic into a California-French delicacy, serving the corn pudding with bosky chanterelles, a 65-degree egg, dried black garlic, and a scattering of popcorn seasoned with malt-vinegar powder, smoked paprika, and Espelette pepper.

But the dish of the evening from this young chef, who was born in Normandy and studied in Paris, showcased his ability to coax sublime succulence and flavor from meat. Delaroque began preparing the course—called simply Duck, Fig, Shallots—more than a week before, when he procured the birds from Sonoma’s Liberty Farm. He cured the legs with paprika, orange zest, mustard, and Espelette pepper, then cooked them sous vide for eight hours in duck fat, creating a contemporary version of confit. He hung the breasts to cure for a week before roasting them.

The subtle, gamy flavor was enhanced by sauce built just as deliberately: Delaroque slow-roasted shallots overnight and then strained and pressed them to form an intense jus. “It is just shallots,” the chef insisted, before elaborating. “And a little verjuice and salt. And I put a little foie gras fat in, to round out the flavors.”

Next Delaroque added a note of sweetness by cooking fresh figs with port and Grand Marnier, and making fig puree and strips of fig leather. He finished the dish with deeply flavored matsutake mushrooms,  shaved into thin slices, for an earthy bass note. “We use what we have in California,” Delaroque said. “The best of it.”