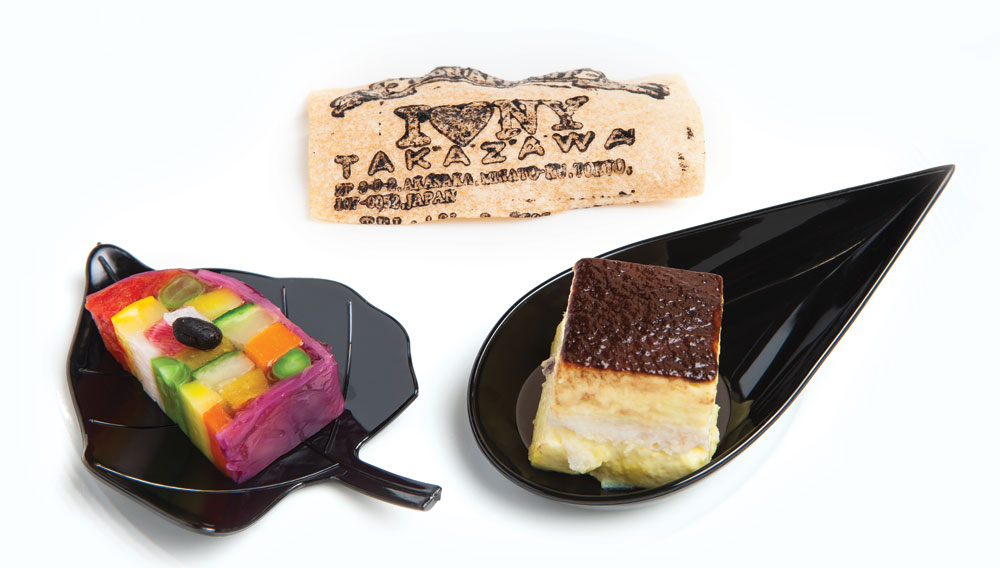 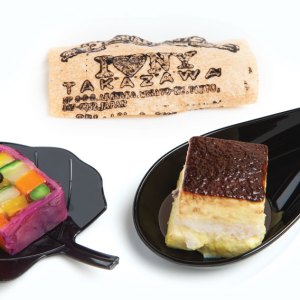 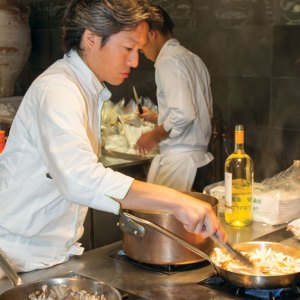 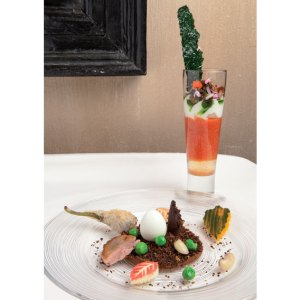 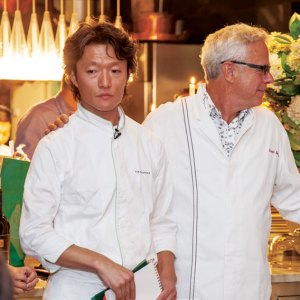 The Event: The centerpiece for Takazawa’s dinner was a long swath of farmland—more precisely, a strip of live micro herbs that stretched the length of the table—and each place setting included a set of gardening gloves and a tiny pair of clippers. Other chefs may talk about farm to table, but Takazawa was taking the notion to a literal extreme. And this was just the opening move in one of the most exciting meals in the history of the Culinary Masters Competition.

Takazawa, whose Tokyo restaurant serves only 10 guests a night, cleverly translated his witty theatrics for Manhattan, making the most of the dramatic open kitchen in the Bouley Test Kitchen loft space. As guests arrived, he whipped out a device that piped hay smoke under a glass dome, flavoring crisp “scallop paper” appetizers that bore the “I ♥ NY” slogan printed in squid ink. Next came Takazawa’s signature ratatouille, a naturally neon-colored composition of 15 vegetables, each individually cooked and layered into a narrow terrine, then sliced to form a single-bite, 15-vegetable mosaic.

As judges took their seats and wondered about the patch of herbs before them, Akiko Takazawa, the chef’s wife, played her usual role in the dining room, explaining each of the courses with a wink. The first course, called Takazawa’s Farm in New York, featured an umami-rich disk of “soil” served with intricately carved fruits and gelled vegetables. The second course—Shabu Shabu Salad with Powdery Dressing—arrived in a delicate glass bowl Takazawa had designed specifically for it. In the center were simply three slices of perfect Miyazaki beef, which diners were instructed to adorn with clippings of the live herbs. Takazawa then left the kitchen with a little pot of piquant dressing—frozen to a powder by liquid nitrogen—and ladled it over each bowl as curls of smoke rose toward the rafters.

The next course, called Hot Mushroom Balloon, was decorated with acorns and fall leaves that the Takazawas had foraged that morning in Central Park. The clippers were needed once again to cut open the balloon and release the rich aroma of a wild-mushroom ragout.

For the duration of the dinner, Takazawa was followed by a Japanese film crew making a documentary about one of Tokyo’s most surprising chefs. By the end of the meal, it was no surprise why.